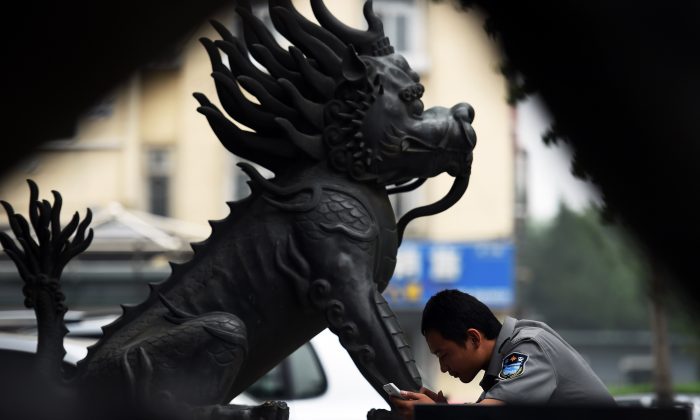 A security guard outside a bank in Beijing on July 3, 2014. China and the Western-led IMF are very close on reaching an agreement on increasing Chinese influence on the global financial system. (GREG BAKER/AFP/Getty Images)
Business

China wants to have more say in the international community and it is using the International Monetary Fund as a vehicle. Behind the scenes, the whole process has turned into a fierce negotiation about who will control global finance in the future.

Superficially, China wants to be included in the fund’s own reserve currency, the Special Drawing Right (SDR). As usual with the IMF, this is more a matter of prestige, rather than practical value—there are only $285 billion worth of SDR in circulation worldwide. However, in reality, China wants much more:

“I think they are looking at a fair seat at the table. They don’t want to be a junior cousin,” said Simon Mikhailovich, managing director of the Tocqueville Bullion Reserve Fund.

The first step is the inclusion in the SDR, which is formally reviewed at the end of the year. The next step is to increase its capital and voting power at the IMF, which is a separate process.

On the other side of the table is the United States, the incumbent super power, which still controls the global financial system, including the IMF and the World Bank. It has to manage China’s rising influence and both parties have a lot to lose.

“I think the U.S. is still blocking the decision to give China more voting rights. We are on the way to a realignment of the global monetary order,” said Ronald Stöferle, managing director at European Asset Manager Incrementum.

If the Chinese started dumping bonds, all it would take is one phone call from the president to the Treasury to freeze the bond accounts.
— James Rickards, author

While the issue of voting rights is still in contention, in secret, U.S. officials in Beijing have admitted the United States doesn’t oppose the yuan becoming part of the SDR, maybe because it agrees with the IMF assessment that China’s currency is no longer undervalued.

As of March 2015, China is the largest holder of U.S. Treasury bonds and therefore has considerable influence over the market. This is why many people think China can put pressure on the United States to get more global influence.

However, this argument is often overrated as the bonds are still in custody in the United States and U.S. authorities have considerable power to stop any kind of market manipulation.

“If the Chinese started dumping bonds, all it would take is one phone call from the president to the Treasury to freeze the bond accounts,” James Rickards, the author of best-seller “Currency Wars,” told Fox Business.

Because China holds so many dollars, they are also vulnerable to a dollar devaluation, something the Fed can control through various forms of quantitative easing.

“All we have to do is inflate our currency and pay them back in cheaper dollars and that reflects a wealth transfer from China to the United States. So China is completely vulnerable to that, which is why they are buying gold to create a hedge,” Rickards told Epoch Times.

But China has used other means to put on more leverage on the United States: “I think they want to join the big boys club, meaning the IMF and World Bank. I think the reason why they are establishing new institutions like the Asian Infrastructure and Investment Bank (AIIB) is to put some pressure on the institutions controlled by the United States,” said Stöferle.

Dan Oliver, principal at hedge fund Myrmikan Capital believes the Chinese want to replicate the Bretton Woods financial system, set up after World War II with the United States in its center.

“Part of the Bretton Woods system was the IMF and the World Bank. That gave the United States a lot of power. It seems to be that the components of what the Chinese are doing with its new gold exchanges and the AIIB is exactly what the Americans did after World War II. That is threatening to American interests.”

He believes this is why the United States was always against the China-led AIIB but couldn’t openly admit it. “It was like Russia being against the Marshall Plan. The Chinese are doing the same thing to us. We can’t say we are against it, but if we are for it, it undermines one of the sources of American power,” said Oliver.

As a consequence, the IMF has gradually removed opposition to including the yuan in the SDR, for example by saying the currency is no longer undervalued. But other elements haven’t proceeded as smoothly.

The executive board of the IMF was supposed to meet in May to formally recognize China’s aspirations, but the meeting has now been postponed.

James Nolt, a senior fellow at the World Policy Institute thinks negotiations are still ongoing behind the scenes and that the whole process might not be a zero sum game where one party either loses or gains.

“The United States ought to encourage Chinese integration into a multilateral economy. Everybody gets to play and we don’t want to create isolated zones in the world economy. We don’t want to create a two-tier system where people are playing by different rules,” which would ultimately happen if China really sets up a parallel system centered around the yuan and the AIIB.

Even for China, trying to compete would be rather costly and it has much more to gain by opening its financial system to Western know-how, thereby becoming more efficient. “I don’t think it would be a big sacrifice. There is certainly a deal to be made where all parties see it as a plus,” said Nolt.

China’s capital account is still closed—restricting transfers in and out of the country—and the yuan is lagging in the use of derivatives as well fixed income securities. It is therefore a long way away from displacing the dollar as the only reserve currency. If China country reformed its financial system as part of taking more responsibility at the IMF, it would be a huge benefit.

For China, gaining more influence at the IMF is the most cost-effective solution and the United States can still manage the new power from within, rather than having to deal with a competing system from without. So it is very likely both parties will chose the path of least resistance and come to an agreement that both can live with.

“I am certain that the yuan will be included in the SDR going forward. There will be a decision made in September or October,” said Stöferle. Don’t be too surprised if China get’s more voting rights at the IMF as well.