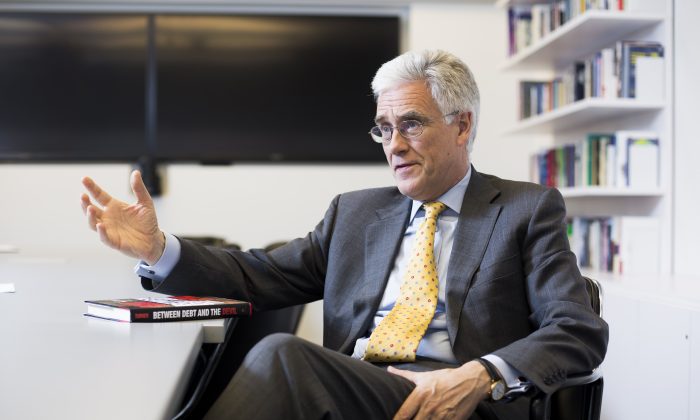 Adair Turner, the Baron Turner of Ecchinswell is not your average regulator. First off, he steered the British banking system through the financial crisis in 2008 as the head of the Financial Services Authority (FSA), Britain’s former financial regulatory body.

But how is that different from other regulators such as Timothy Geithner and Ben Bernanke?

He started to ask questions going beyond capital ratios and counterparty risk management. He questioned the whole financial system itself and came to the same conclusions previously reserved to rogue economists such as Hyman Minsky and Steve Keen.

As one of the only senior decision makers in financial regulation he boldly states what these rogue economists have known for a long time: Banks manufacture money in the form of credit and it’s not always for the best of society. In his book “Between Debt and the Devil,” he describes the process in detail and also makes the case of printing money to finance government deficits.

Epoch Times: When did you realize bank credit was dangerous?

Adair Turner: I felt that we were not asking some fundamental questions that need to be asked. I remember a point in autumn 2008 where we were debating whether we should take measure to regulate the credit default swap market, which had played a role in the crisis.

So I began to ask those questions early on. Then I gave a speech in spring 2010 titled, “What Do Banks Do and What Should They Do?”

I did a lot of analysis then and it was at that stage I began to be struck by the huge difference between what our textbooks said they did, and what they actually do.

A lot of bankers themselves don’t understand that’s what they do.

Epoch Times: People think banks compete for deposits and then loan out that money. What do banks do in your opinion?

The fact that banks create money, credit, and purchasing power is something very well understood by early 20th century economists such as Knut Wicksell or Friedrich von Hayek, but it went out of the way of thinking from about the 1960s onward.

I ask the question in the final chapter of my book, “Why did economics make so many fundamental mistakes?” I think it developed a desire to model the system in a highly mathematical fashion and it turns out it is much easier to do if you just ignore the banking system.

Epoch Times: So banks basically print money. Why are you the first high-level official to delve into the topic?

Mr. Turner: Often in the worlds of financial regulation experts are very slightly detached from real economic theory as well as from reality. I find it a bit of a mystery because it has become very obvious that this is a fundamental understanding of the economic process. It’s the same mystery of why the insights of Hyman Minsky were ignored for so long?

There’s really something very odd about the resilience within economics of certain rather mechanical ways of looking at the world which are mathematically traceable but deeply untrue.

What you end up with is an economics that is mathematically very sophisticated but totally unrealistic.

Epoch Times: Do you think banks are actively engaged in protecting their monopoly of creating money?

Mr. Turner: Whether the banks directly influenced the academia on this particular issue of “let’s cover the fact that we create credit, money, and purchasing power,” I’m not so sure because I think the funny thing is a lot of bankers themselves don’t understand that’s what they do.

To them it feels like I’ve got to get a deposit in before I can lend. They fail to think through how the interaction of several banks together and the operation of the interbank market means the system in total can create new credit and money that didn’t previously exist.

So one of the things that struck me is how little many, very good, successful, practical bankers understand the totality of the system of which they are a particular cog.

Epoch Times: What about the political system?

Mr. Turner: At any one time there is a whole group who had a shared interest in there being more credit. So the banks wanted to grow their balance sheets and they wanted low capital requirements.

Then let’s take the United States: You had politicians which wanted the banking system or the capital market system to lend as much money as easily as possible to householders to enable people to feel like they were participating in the American Dream despite not receiving any increase in real wages.

The idea is that we’ve got to extend house ownership, and the way to extend house ownership is to extend easy mortgage credit. This was a belief shared across the political spectrum and interfaced with the banking system saying “Ah yes, and if you leave us alone and give us light capital standards and let us develop all these complicated new credit securities we’ll be able to provide that credit.”