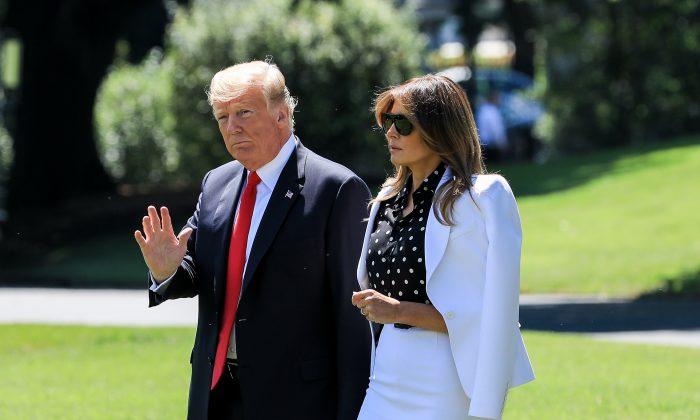 President Donald Trump and first lady Melania Trump walk on the South Lawn to board Marine One at the White House in Washington on Aug. 24, 2018. (Samira Bouaou/The Epoch Times)
Viewpoints

The ‘Trump Effect’ on the Environment

How do the president's moves to ease the regulatory burden affect environmental consultants?

Because my day job involves helping industry deal with environmental regulations, I am frequently asked whether the Trump administration’s environmental policies have hurt my business. It’s a question that is almost always asked when a Republican occupies the White House, because of the mistaken impression that presidents from the GOP allow the “dirty-rotten polluters” to get away with murder.

Actually, from Nixon through both Bushes, the opposite has been true. Republican administrations piled on environmental regulations as much as Democrat administrations did, the only difference being that while Democrats got credit for doing so among environmental groups like the Sierra Club and Natural Resources Defense Council, the GOP was vilified by the same groups no matter what they did.

He clearly understands that complexity does not equate to accountability. The opposite is true. The more needlessly complex a regulatory scheme, the more frustrated the regulated community becomes.

What’s the point of trying to comply when the system is so full of hidden landmines that you’re almost guaranteed to inadvertently step on one? Or—as I am prone to saying—in the United States today, environmental regulation is about paperwork, not pollution?

So, how do Trump’s meaningful moves to ease the regulatory burden on industry affect my business and that of the thousands of others doing the same sort of work as me? The answer may surprise you: It’s keeping me about as busy as I can remember in a career spanning more than 30 years.

While I cannot pretend to speak for everyone involved in environmental consulting, practically every colleague and competitor I know believes the “Trump effect” has been almost entirely positive in our line of work.

There are a couple of reasons why that is so. One is fairly obvious: A rapidly expanding economy leads to an increase in new projects in the industrial sector. Whether a project involves expansion of an existing plant or construction of a new one, developers need to obtain environmental permits, and operators need to comply with emissions standards, reporting requirements, record-keeping rules, and the like. The more projects, the larger the pie, and thus the bigger the slice people in my line of work are able to grab.

The state or local agency is the primary permitting authority just about everywhere. The EPA only provides oversight to their programs for the most part. A part of the regulatory system includes the principle that states may be, but are not required to be, more stringent in their regulatory programs than the minimum federal requirements. This is often the case, particularly in traditionally blue states.

Dealing with state programs can still be difficult. That fact has not changed. In states like California, it can be positively painful. In states like Texas, while the permitting process is not a pleasure, it’s cordial and sensible for the most part. There are many shades of gray in between. The point is that the state or local agency, not federal oversight, defines the playing field.

Americans should be proud of our history of environmental progress over the last 50 years. Trump has done nothing to reverse that progress. Instead, his sensible reforms ensure that we will continue to improve.