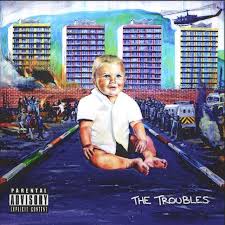 The Troubles – Influential Album of 2014

A degree of reconciliation has happened in Northern Ireland in recent years. However, there is still a divide that hasn’t been fully addressed. When politicians fail to speak up about issues, the mantle may be picked up by artists such as Jun Tzu – a rapper from Northern Ireland whose father was a convicted member of the UVF, but has since become a preacher.

I met Jun Tzu earlier this year at the launch of his album The Troubles, and the venue was the Crumlin Road Gaol in Belfast – a prison that his father did time in that has now been transformed into a convention centre.

I have been listening to the album over the past few months, and it truly is a masterful collection of work. Rap music can be hard-hitting and raw; however, Jun Tzu has used this medium to explain the Troubles in Northern Ireland like nobody else has managed to. It may not be everybody’s cup of tea, but the message is positive, and deserves a listen.

Jun Tzu on his album The Troubles

“I have been working on this album for the past seven years. It’s entitled The Troubles and it’s all about my own personal troubles as well as the troubles of my homeland,” explains the larger-than-life rapper. The album talks about his father’s life story and how he grew up and played football alongside Bobby Sands in Newtownabbey, before both their lives veered in opposite directions during the troubles. “There are stories about my grandfather, my great-grandfather, there is a story featuring my little sister. All my family have worked on it, it’s a family-based album. It combines traditional Irish music with stories of my life, and obviously raw and gritty hip-hop as well. It’s never really been done before, talking about the troubles like that in that style.”

Jun Tzu’s father was a paramilitary in the 1970s, and he spent several years of his life in jail before he found religion.

“My goal is to unite the youth of the north and the south together, well not just the youth but everyone else, but the youth is the future so that’s who I’m targeting more than anyone, they are the ones who are going to change this and bring an end to all of the trouble,” he said.

I had presumed that change in Northern Ireland would take generations. However, Jun Tzu explains his theory on change. “It takes one generation for change…everyone is born with the capability to love but they are taught how to hate so they can be untaught it, that’s what I believe. My father broke the cycle of hate – he was filled with bigotry and he totally broke free from it and that’s what enabled me to break free. We moved away [to Manchester] and I was able to look at it from outside the box, so that’s what enabled me to write down these things.”

On being a Northern Irishman Abroad

According to Jun Tzu, the people of Northern Ireland are taught to focus on what is different about their cultures, and not on what they have in common. “There aren’t two humans on the face of the planet that feel and believe exactly the same – everyone is different, everyone is an individual, they all have different mindsets and beliefs. So where do you draw the line? It doesn’t matter what you believe – we are people, we bleed, and we cry…that’s what my music is about.”

Jun Tzu says his music is more about people than politics, and from listening to his album this certainly rings true. “I don’t address the politics – I talk about people, and it’s more about experiences than beliefs. I’m talking about what I have seen and witnessed. What I have seen is that people have been tricked and they are confused and they are fighting each other, dwelling upon differences rather than similarities.”

On Accepting your Life and Moving on

“What you have to do – and I have learnt this as well – is there is a saying that ‘we make our plans and the gods laugh upon them’…the truth is you have to go with the flow. Like Bruce Lee described it: we are like water – you have to be adaptable, be prepared to change, you have to be prepared to move forward. If your idealisms are wrong then you have to be prepared to accept that…I stopped this album three years ago. I never thought it was going to happen – it was beyond my control, and my producer moved to Australia, my manager died from health issues last year. It would take me all night to tell you about the trials and tribulations I have faced making this album, its seen blood, sweat, tears and deaths.”

“My message is also about the futility of violence. You have to take a step back and ask yourself why are we fighting. If it’s an eye for an eye because you are defending your family, well everyone’s family gets hurt. It’s about putting an end to the violence, there seems to be a whole lot of people who have been played against each other for hundreds of years. The troubles in Northern Ireland were set up,” believes Jun Tzu.

Jun Tzu started writing poetry when he was twelve – he says he was going through a very emotional time then. He was kicked out of school for what they described as ‘uncontrollable rage’. “It stemmed from other kids calling me ‘IRA’ after they bombed the Arndale Centre in Manchester in 1996 where we were living. It didn’t matter that my dad was a UVF man – we were Irish, so we were IRA. The only community that embraced me was the black community in Moss Side, and at that time it was known as the Bronx of the UK.” According to Jun Tzu, at that time you were four times more likely to be robbed or shot in Moss Side than anywhere else in the UK, yet it was the white community that he had most difficulty with.

Black friends essentially took him in, and he fell in love with their music. He developed a passion for the work of Tupac, who also came from a reactionary background. “The earth is rich and plentiful – there is enough food for everyone, there is no reason why anyone should starve. I haven’t really delved into this within the album, the album is just the start, it explains the roots…it’s more about people than what I believe.

“I’ve had death threats while doing this album, that’s how it works…of course people are going to be upset, you’re rocking the boat, but that has to come with the territory. I’m prepared to be shot for what I say, I really am, because I believe in peace and you have to be able to die for what you say. My goal is to bring them all together. They have been playing us off against each other for hundreds of years.”

“When I was twelve after getting kicked out of school I spent a lot of time in the library, and I came across a book called The Art of War by Sun Tzu. I fell in love with that book, hence the name. I changed the S to a J for Johnny. Later, I found out that Jun Tzu means to be a role model or an upright citizen in Chinese. I’m glad it didn’t mean sausage & chips or something!”