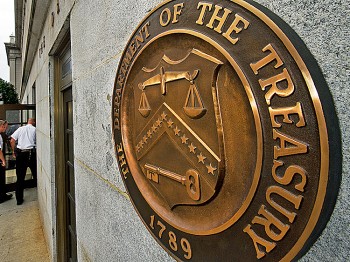 The U.S. Department of the Treasury building in Washington. The federal budget makes up 21.5 percent of GDP. (Chip Somodevilla/Getty Images)
Opinion

The Trouble With Taxes

Can we imagine a world without?

“There is no more persistent and influential faith in the world today than the faith in government spending,” wrote economist Henry Hazlitt in 1946. If that was the case then, what about today? Nearly every problem in the world calls for the government to solve it. In return for these services, the government needs money—a lot of money.

The federal government of the United States alone is on track to spend $3.65 trillion in the fiscal year of 2017, or 21.5 percent of gross domestic product.

Now, the Trump administration has been in the news for proposing a reform of the tax system, including some significant cuts. However, rather than bicker over the costs and effectiveness of that particular proposal, let’s take a step back and look at the big picture on taxes. We may even consider asking the question of whether we need taxation at all.

Taxes artificially increase the risk-reward profile for any operation, regardless of profits.

In 2017, we are immersed in taxes like a fish in water. We are so used to it, we could not even imagine a life without it. But the federal income tax only started in 1913, with a relatively modest 1 percent for the lowest bracket and 7 percent for the highest bracket. Since then, it has been fluctuating, reaching a peak of 92 percent on the highest bracket in the 1950s—which nobody could afford to pay nor actually did pay—and currently stands at 39.6 percent for incomes of more than $411,000.

There are many arguments in favor of abolishing personal and corporate income taxes altogether.

The first is that taxes prevent private economic activity, the core provider of employment and the products we need to sustain our lives.

From a cost-income perspective, high corporate taxes make many business ventures not profitable, especially for small entrepreneurs and innovators. This is exacerbated by the fact that taxes artificially increase the risk-reward profile for any operation, regardless of profits. Taxes immediately reduce the profits, but losses can only be offset after a new profit is earned. This leads to less investment and lower employment because entrepreneurs have to factor in the higher risk and lower savings to buffer for unforeseen circumstances.

Since the bureaucrats are not handing out their own money and usually are not liable for mistakes made in disbursing the funds, the process inevitably leads to waste.

“Improved machinery and better-equipped factories come into existence much more slowly than they otherwise would. The result in the long run is that consumers are prevented from getting better and cheaper products, and that real wages are held down,” wrote Hazlitt, in his classic book “Economics in One Lesson.”

The same principle is true for the employee who may choose not to invest to increase his skill-set and future income because of this skewed risk-reward profile.

The second important reason is that government is notoriously inefficient in providing the goods and services it promises to deliver better than the private sector could.

For example, looking at the different consumer price indices, virtually all sectors with heavy government involvement (health care, education, child care) have much exceeded the price increases in other sectors (automobile, clothing, cellphone service, electronics) and even average inflation.

Since the Affordable Care Act became law in 2010, for example, the consumer price index for medical care rose 19 percent against an increase in the general price level of 11 percent.

But some expenses are not reflected in the price increase. On top of the cost of the services produced by usually private companies like hospitals and colleges, every government program needs to pay for bureaucrats on top of elected politicians. In fiscal 2016, the federal government employed 2.2 million civilian workers and spent $215 billion in compensation alone for usually better wages and benefits than the private sector. The IRS cost $11.7 billion in fiscal 2016 and employed almost 80,000 people.

So instead of two private parties meeting directly, the government inserts an unnecessary and costly bureaucracy in between. The government justifies this bureaucracy because someone must administer the money brought in through taxes and pay it out in subsidies and transfer payments.

Because the bureaucrats do not have perfect information about the needs of different individuals who are affected by these programs, they cannot know which amount or program suits whom, but rather offer one-size-fits-all solutions that lead to inefficiency.

In fact, history suggests the opposite, as most income inequality, which has more causes than just taxes, has arisen after the introduction of a heavy progressive tax system.

In addition, since the bureaucrats are not handing out their own money and usually are not liable for mistakes made in disbursing the funds, the process inevitably leads to waste. And the private education and health care companies happily make use of this bad incentive structure by charging more than they could in a competitive marketplace. Add in a bit of corruption, and prices rise more than they should under normal conditions.

For those who think that less government involvement would inevitably lead to people dying in the streets because the health care system would collapse and nobody would be able to afford college education without the subsidies, consider the following:

First, these services would become much cheaper under a competitive system for the reasons cited above. Second, imagine how many more resources every household would command if they didn’t have to pay federal income taxes. If you add more opportunities for business and employment because of lower taxes, you may even be able to pay for health care and college without having to go into debt.

The same is true for retirement planning and private charity. Fewer taxes mean more resources for individuals and private charity organizations to take over. And compared to 120 years ago when there was no welfare state and many people had to live in misery, our society may well be advanced enough now for the private sector to provide most if not all of government services like Social Security, Medicare, and Medicaid.

If the government focused on essentials like providing infrastructure, security, and jurisprudence for private contracts, taxes could be much lower. But would the rich then become ever richer by not paying a heavy progressive tax?

In fact, history suggests the opposite, as most income inequality, which has more causes than just taxes, has arisen after the introduction of a heavy progressive tax system.

In a system in which the government takes the backseat, the wealthy would have two choices about what they could do with their extra money. They could spend it, leading to increases in economic activity, which should benefit everyone. Of course, well-off people spend a lower proportion of their income on consumption because there is a limit on how much any one person can consume.

So they would be forced to save the rest. Normally, these type of savings would go into private capital markets, leading to an increase in investment, business activity, and employment.

Under the current regime, however, 10 to 20 percent of the U.S. household net worth of $96.2 trillion is invested in most of the $20 trillion worth of government debt, either directly or through various investment structures like pension funds. Foreigners hold around $6 trillion of U.S. government debt.

Even though interest rates are low at the moment, the average taxpayer is paying this interest for households who can afford to save and invest in government securities, although this includes many middle-class families as well. However, the relatively poorer taxpayer doesn’t have any savings, yet may not qualify for government transfer payments because he has a job. This person gets nothing in return, making his situation worse, not better.

So if the government kept a balanced budget by getting out of most non-essentials sectors, saving too would level the playing field.

Of course, reducing taxes to 1913 levels is completely against the incentives of politicians and bureaucrats whose bread and butter is to design and administer government programs that need funding. This is one of the reasons even President Donald Trump’s relatively modest tax proposal will take so long to pass.