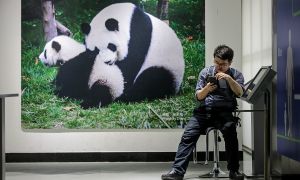 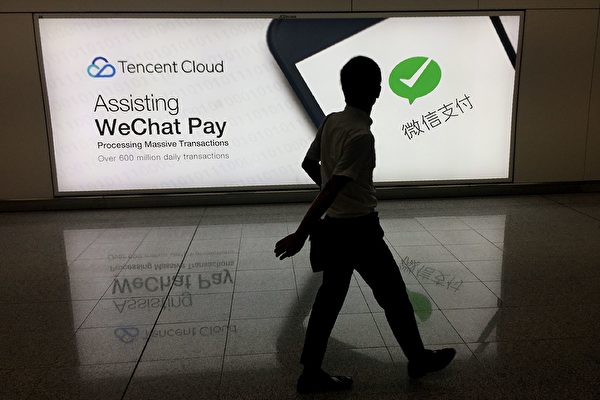 As the largest telecom app in China, Tencent’s WeChat controlled the news source for overseas Chinese, made them listen to and watch the CCP’s content and do what the CCP wish. (RICHARD A. BROOKS/AFP/Getty Images)
US-China Relations

As the largest social media and messaging app in China, Tencent’s WeChat controls the news flow for overseas Chinese, directing them to read and watch content sanctioned by the Chinese Communist Party (CCP).

U.S. think tanks and China experts worry that WeChat is the new Trojan Horse which is infiltrating the West as the China-censored app has been widely used to influence Western politics and Chinese living abroad.

In addition to suppressing political hardliners, WeChat is also pulling some Western politicians towards the CCP’s worldview.

Across Australia, Canada, and the United States many political parties and politicians have opened WeChat accounts to stay closer to Chinese immigrants in their districts.

It can’t be denied that WeChat is under the close monitor and supervision of the CCP and has backdoors and other security issues no matter where the users are located. WeChat received a rating of 0 out of 100 in Amnesty International’s instant messaging software security assessment, because of issues like not having end-to-end encryption and the presence of backdoors.

Even more concerning is the unwitting self-censorship by Western politicians.

One example is the Australian Federal election on May 18, 2019. Prior to the election, many candidates increasingly used Chinese social media platforms such as Weibo and WeChat to engage with Chinese voters.

“When Australian politicians are trying to communicate with their Chinese-Australian voters via this app (WeChat), they are automatically part of the censorship apparatus that is being run out of Beijing,” cyber analyst Fergus Ryan from the Australian Strategic Policy Institute told Australia Broadcasting Corp (ABC).

“It means that certain sensitive topics that Beijing doesn’t like people discussing are not able to be discussed,” Ryan said.

Australian Labor Party leader Bill Shorten interacted with the Australian Chinese community in a live WeChat forum on March 27. When he was asked questions regarding Chinese tech company Huawei, the CCP’s infiltration and interference in Australia, a Chinese billionaire and political donor who has ties to the CCP, and negative views on the CCP, Shorten did not answer any of these questions.

On the other hand, the CCP has been using WeChat to shepherd Chinese immigrates’ votes to pro-CCP candidates.

Researchers from the University of Canberra’s Institute for Governance and Policy Analysis analyzed Australian content on 47 of the most visited WeChat Official accounts in mainland China between November 2018 and March 2019, 29 of these accounts were aligned with the CCP, according to ABC.

“Our evidence suggests that accounts aligned more closely with the Government in Beijing have a clear anti-Liberal (Government) story coming out of them,” said Michael Jensen, a senior research fellow at the University of Canberra’s Institute for Governance and Policy Analysis.

Former Chinese diplomat at the Sidney Embassy Chen Yonglin told The Epoch Times, “The CCP has a plan for Australia. They want to lead the country to a certain side. Basically they want the Labor Party to replace the Liberal government.”

During the 2016 U.S. presidential election, one of Wang’s Chinese friends shared a Chinese website link that he was going to use to watch the live debate between Trump and Hilary Clinton.

Her friend was attending graduate school in New York at the time. He bypassed both live TV broadcasts and YouTube, and chose to watch the live debate on a Chinese website under the CCP’s stringent censorship.

“Why? Because that was where he obtained information about everything, including the country he immigrated to,” Wang wrote. “He’s certainly not alone.”

Chinese people abroad are largely still under the CCP’s information control. That’s why some Chinese are still aligned to the CCP on issues like human rights and politics.

On WeChat, all politically sensitive contents and criticism on the CCP are removed instantaneously by the system. This includes information shared privately between users. Some posts survive a few seconds before they are removed. Some messages are intercepted, though no failure notice is given that they were never received.

Many “sensitive terms” are human rights related, such as the Tiananmen Square Massacre, Falun Gong, and the recent protests in Hong Kong.

“WeChat is not just another social media tool to reach a specific demographic. It is a platform that can be manipulated by a foreign government—one that is known for its human rights violations—to suit its needs,” Wang remarked.

A 2016 study by the University of Toronto found that WeChat applies different standards for users in mainland China and internationally, with the majority of censorship targeted for Chinese accounts. “Remarkably, the researchers found that censorship stays on even if users switch to a non-mainland phone number or travel to a different country,” said the University.

Australian media outlet The Conversation found a significant disparity between the news published by WeChat’s top accounts targeting Chinese in Australia, and that from Special Broadcasting Service’s (SBS) mandarin version. SBS is funded by the Australian government and operates independently.

During a 20-month period, SBS dedicated 2.9 percent of its output to Chinese politics and foreign policy. The number was 0.26 percent for WeChat accounts, according to The Conversation. The majority of the WeChat articles “had similar content to news reports from China’s domestic news agencies, which tend to reflect the position of the Chinese government,” said The Conversation.

In a separate study, The Conversation surveyed Mandarin Chinese speakers in Australia to understand their media consumption habits. Over 60 percent of survey participants identified WeChat as their primary source of news and information, and only 22 percent reported that they “always access news and information from English-language media in Australia.”

Chinese in the United States showed a similar pattern. A 2018 study by the Tow Center for Digital Journalism showed that among U.S.-based WeChat users, 79 percent said they read political news from chat groups. Seventy-one percent of users also reported belonging to groups larger than 100 people, where members may not know each other outside of WeChat.

New York commentator Zhu Ming said that WeChat is hard to replace in the near future for many overseas Chinese because it provides a convenient way to stay connected with those inside of China.

But Zhu advised Chinese to try to think independently. “When Chinese go abroad, they should learn to be part of a normal society, and cleanse their habitual ways of thinking that were formed in a communist environment,” Zhu said. “Accepting different viewpoints, practicing critical thinking and reducing reliance on WeChat are some good first steps for Chinese overseas.”

A Trojan Horse in the Heart of Western Politics

As the major news source for overseas Chinese, WeChat has been impacting Western politics from within.

Canadian member of Parliament Jenny Kwan posted a statement on Hong Kong’s Umbrella Movement in September 2017, in which she praised Hong Kong protesters for “fighting for their belief and a better society.” It took WeChat little time to delete her posting.

In an email reply to human rights expert Wang Yaqiu, Kwan said “the post received 100 reads, 1 like and 3 comments before WeChat administrators deleted it. We did not realize it was removed until we read your email.”

Wang said that the censorship on WeChat allows the CCP to easily and quietly prevent foreign elected officials to communicate to Chinese voters in their own countries.”

“If the CCP determines to interfere with such conversations in a broader scope, the result will be unimaginable,” Wang said.

In its widely read “Chinese Influence & American Interests: Promoting Constructive Vigilance”, the Hoover Institution also pointed out the potential harm WeChat can do to U.S. politics.

“A vast and vital community of Americans gets most of its ‘news’ from, and does most of its communicating via, a platform known to be censored by a foreign government that opposes free speech and has been named by the U.S. National Security Strategy as the greatest long-term security challenge the nation faces,” said the Hoover report. “In the United States, as in China, WeChat censors news and comments in accordance with rules set by China’s Communist Party.”

“But it is more than that;” said the report. “For many users in the United States, China, and around the world, WeChat is a digital ecosystem so ubiquitous that it constitutes a lifestyle—a drumbeat that determines the rhythms of the day.”

The authors of the report are mostly leading China experts. Many of them hoped the CCP would reform for real freedom for the people, but now they see their hopes would never come true.

The report further warned that “the anti-American hothouse created by WeChat’s ‘news channels’ leads to a type of resentful pro-Chinese nationalism that is ripe for exploitation by the Chinese government.”

Such resentment is a strong message to Western politicians through overseas Chinese: You’d better not be tough against the CCP because you’ll be labeled as a China-hater or China-rejector, and that will cost you many Chinese voters.

University of Technology Sydney’s China expert Professor Feng Chongyi told The Epoch Times, “The WeChat platform itself is one that’s operated by the CCP—a platform with complete features for censorship, deletion, and filtering.”

“The ‘public opinions’ on WeChat are coined. This platform is by no means a natural and natural discussion platform. It’ll cause turmoil for Australia’s democratic system,” Feng said. “If such platforms are used in the election process, the distorted view of public opinions will cause the voters to misjudge the political parties.”

Commentator Zhu Ming pointed out the fact that WeChat has been leading the Chinese community to support or reject certain Western politicians should be treated as an espionage activity trying to shape and influence Western politics by a foreign power.

Zhu suggested western governments should watch and investigate the level of the CCP’s interference in their domestic politics via WeChat.

Western politicians’ attempts to engage the Chinese community on social media should be encouraged. But we should not overlook the potential harm of WeChat.

Wang Yaqiu urged Western politicians to make extra effort to reach the Chinese communities through channels free from such CCP influence. Otherwise, she said, they may fall into the trap of CCP’s influence.

Public ethics expert Professor Clive Hamilton, the author of “Silent Invasion,” warns that Australian politicians using Wechat “need to understand that their communications are being monitored and, if necessary, censored by Beijing’s army of censors”.

“Australian politicians need to develop their own means of communicating directly with voters of Chinese heritage rather than relying on media controlled by Beijing.”