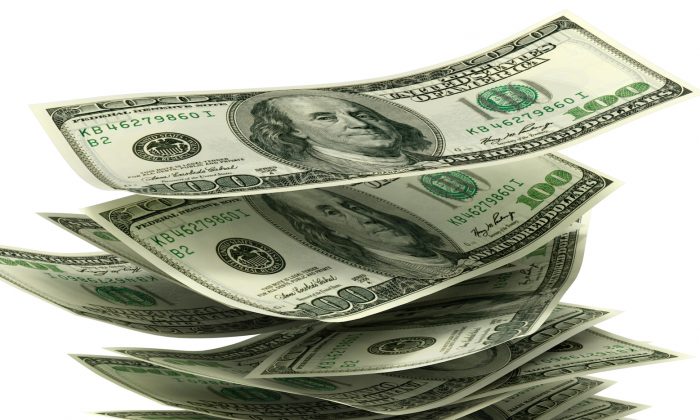 File photo of a stack of U.S. 100-dollar bills. The value of money has slowly been eroded over time. (Urfin/Shutterstock)
Viewpoints

The Trivialization of Money

About 60 years ago, Sen. Everett Dirksen (R-Ill.) uttered the famous quip, “A billion here, a billion there, and pretty soon, you’re talking about real money.”

Has politics in Washington changed much in the six decades since? Yes and no. No, the same cavalier attitude about spending other people’s money rages on unchecked. Yes, the scale has changed drastically.

Today, the refrain is “a trillion here, a trillion there.”

“Trillion” is a simple word. It rolls effortlessly off the tongue. But the word’s simplicity belies the immensity that it signifies. If you stacked $100 bills flat on top of each other, $1 million would be about 40 inches tall, a billion would be more than twice the height of the Empire State Building, and a trillion would rise more than 631 miles. If those were $1 bills instead of hundreds, the pile (again, stacked flat on top of each other) would, if laid on its side, circle the Earth at the equator more than 2.5 times.

In terms of time, if you had been spending $1 million a day, every day since the birth of Christ, you still wouldn’t have spent even three-quarters of $1 trillion.

Today, under the pressure of democratic politics in which government is viewed as a Santa Claus with infinitely deep pockets, the two parties (the party of Big Government—the Republicans—and the party of Bigger Government—the democratic socialists—never propose freezing, much less (gasp!) shrinking, federal spending. The only debate is about how many additional trillions of dollars of debt to add.

Among its other deleterious effects, the coronavirus pandemic has accelerated the pace at which our government is adding to the national debt. Having already authorized at least $2.9 trillion in emergency spending—close to half of which the government hasn’t even disbursed yet, according to Sen. Ron Johnson (R-Wis.)—the current political quarrel is between Republicans prepared to spend $1 trillion more and Democrats who want to spend $3 trillion more.

The sad thing is that even if the pandemic were to disappear tomorrow, the crazed push for more debt would continue. Presumptive Democratic presidential candidate Joe Biden recently unveiled two multitrillion-dollar spending plans. First, Biden wants to spend $2 trillion in response to climate change (a figure that the democratic socialists in Congress will surely claim is far too small). That pales next to the $7 trillion that Biden says he will use to close the wealth gap between rich and poor, black and white.

The continued spending of trillions of dollars that don’t even exist yet is insane. What we are witnessing is the utter trivialization of money. Money used to be respected. It was a solid symbol that something valuable had been brought into existence by human ingenuity or effort. A unit of money represented economic production, the creation of new wealth. Today, our currency has taken on an unserious “Monopoly money” quality. Politicians treat it like a plaything. It doesn’t bother them that they are saddling our children with tens of trillions of dollars of debt.

Why worry? It’s only money. Or is it?

There are three “F’s” that have enabled the trivialization of money: fiat currency, the Federal Reserve System, and financialization.

The “original [monetary] sin” is the adoption of a fiat currency—“fiat” denoting a money substitute that has no nonmonetary value in the marketplace. Our money used to consist of real economic goods—specifically, gold and silver coins or paper certificates redeemable in gold or silver. The United States went off the gold standard in two stages—in 1933, when FDR ended currency redemption for Americans and in 1971, when Richard Nixon did the same internationally.

A silver coin had genuine value, whether it was used as money or traded as a commodity. It would have value in the marketplace even in the absence of legal tender laws forcing people to accept it as “money”—unlike the backed-by-nothing-substantial Federal Reserve Notes we are compelled to accept today.

Fiat currencies sooner or later trade at a price that reflects economic reality—that trillions of rectangular pieces of “paper” (actually, a cotton-linen compound), or digital representations thereof, are essentially worthless. (If you doubt this, ask yourself if you would strive to accumulate those pieces of fabric if the government didn’t mandate that they be accepted as “money.”)

The Federal Reserve System, ostensibly created to support monetary stability and to lessen the ups and downs of the business cycle, has evolved into a bizarro monster. Having already seen about 97 percent of the dollar’s purchasing power melt away in its 106 years of operation, today’s Fed strives for a 2 percent inflation rate—that is, it seeks a deliberate devaluation of 2 percent of the buck’s purchasing power year after year. More ominously, the Fed’s main function now is to bail out Uncle Sam whenever our overleveraged financial system threatens to collapse and end the government’s ability to redirect trillions of dollars per year.

To accomplish this goal, the Fed has engineered near-zero interest rates for at least a decade. What has enabled the federal government to continue its profligate overspending is the Fed-engineered freedom from having to pay historically normal rates of interest, thereby shaving hundreds of billions from the federal budget.

The side effects of the Fed having driven interest rates to near-zero have been pernicious to our economy. The most important prices in a market economy are interest rates—sometimes called “the price of money,” but, more accurately, the price of capital. Interest rates apportion and coordinate consumption and production between the present and the future. With near-zero interest rates, the time value of money has been more or less obliterated, obscuring vital price signals that entrepreneurs need to help guide their decisions.

Another ill effect of near-zero interest rates is that they essentially create billions and trillions of dollars of “fiat capital,” which is no more real capital than fiat currency is real money. The artificially cheap fiat capital resulting from the Fed’s policies bails out zombie corporations, enabling moribund businesses to stagger on rather than fold. That retards the normal, healthy economic process of valuable economic inputs migrating from relatively uneconomical uses to entrepreneurs starting new businesses.

In short, the Fed has short-circuited the essential self-adjusting feature of the market economy—the “creative destruction” by which stagnant firms die out and vibrant new businesses take their place in the normal cycle of business. This has caused persistent slow growth as we inexorably head toward what I’ve been calling “the Japanization of the American economy.”

The third “f,” financialization, is the natural outcome of the Fed’s exotic monetary manipulations. Taking advantage of trillions of currency units created out of thin air and artificially suppressed interest rates, clever financiers play exotic financial games. In normal economic times, monetary savings supplied the capital that financed the production of new real wealth. Capital was used for the humane purpose of improving standards of living.

Today, though, capital has become a somewhat evanescent phenomenon, a mere abstraction. Financiers devise clever ways to arrange and package this semi-ephemeral thing called “dollars” to make other dollars without producing any real wealth at all. And, as we found out in the 2008 financial crisis, the federal government raced to rescue Wall Street for the completely self-interested reason that without an immense functioning financial infrastructure, Washington’s multi-trillion-dollar spending and redistributing machine would quickly grind to a halt.

Question: Who deserves the blame for the fiscal insanity of pseudo-money and pseudo-capital? Well, who deprived the American people of real money? The federal government. Who created the deus ex machina known as the Federal Reserve System? Again, the federal government. But it’s just too easy, convenient, and expedient to blame politicians.

The fact is that “we the people” are to blame. A majority of Americans over the past 140 years or so have fallen hook, line, and sinker for the progressive catnip of government being cast in the role of Mommy and Daddy and Santa Claus. A majority of Americans keep voting for the government to spend more, more, more. For the politicians, the incentives are plain: Spend more on programs that voters like, or those voters will send you packing.

The traditional abhorrence of government debt was burned into our political DNA by such fiscally honorable presidents as George Washington and Thomas Jefferson. They thought it immoral to spend money today and expect future generations to pay for it. (Are today’s protesters sure they want to cancel out Washington and Lincoln completely?) Today, though, that moral restraint is outdated and defunct. Whether it’s private debt or public, tens of millions of Americans live according to a “consume today, pay for it later (maybe)” ethos.

With that being the prevailing mentality, the creation of new Federal Reserve Notes by the trillion will continue until that fateful day when the increasingly brittle debt structure starts to collapse.

And here’s some bad news to close with: In early 2019, I warned about Modern Monetary Theory (MMT) as a tool for weakening the private sector and imposing stealth socialism. Surprise! We’re getting a heavy dose of MMT right now. The federal government and Federal Reserve are working hand in hand to conjure up trillions of new fundamentally insubstantial and essentially counterfeit “dollars” for Uncle Sam to spend. All those trillions are adding absolutely nothing to our country’s stock of wealth, but they are making more Americans feel increasingly dependent on Washington.

As is often the case with monetary shenanigans, in the short term, creating additional trillions of fiat dollars doesn’t seem to be doing any harm. And in the long run? The British economist John Maynard Keynes parried that question by glibly replying, “In the long run, we’re all dead.” Well, yes, but a more honest answer is that monetary mischief can cause a lot of pain to a lot of people before they die.

The trivialization of money has far-reaching consequences that are anything but trivial.