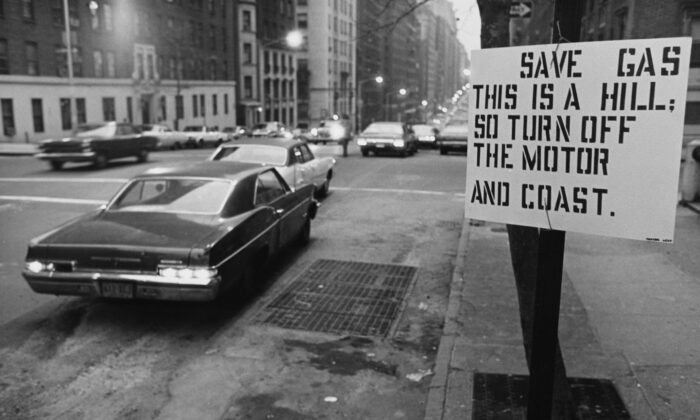 A sign by a road urging drivers to save fuel during the oil crisis of 1973-74 in the United States. The sign reads: 'Save gas; This is a hill, so turn off the motor and coast.' (Archive Photos/Getty Images)
Business Columnists

The Triumph of Economic Ignorance

The Commerce Department reports that inflation-adjusted spending declined by 0.4 percent in May. It’s the first decline in real spending since December and a real foreshadowing of what’s coming. The trajectory is now well-established: depleted savings, real income flat and declining, consumers worrying, investors rethinking everything, and the public ever more demoralized and frustrated.

It’s a scramble for resources at a time of enormous fiscal and monetary fakery that led people to believe that everything was going to be just fine, and that the magic of the printing press and Congressional profligacy would render economic logic null and void.

Here is a picture of how party time—we’re rich so let’s spend like crazy!—turned into a sad state of affairs in rather short order.

And yet the reality is here, and we are watching it all unfold day by day in the data. There is something exasperating about the whole thing simply because it was all so unbearably predictable. The cause and effects are all completely known.

I’m reminded often of the new events of great economic frustration in the life of economist Henry Hazlitt, author of “Economics in One Lesson” (1946) among a dozen other books and 10,000 plus articles. The first event came in 1933. He was working as the literary editor of The Nation magazine, mostly covering novels and biographies and rarely touching on political themes at all.

But Franklin Roosevelt won the 1932 election and immediately embarked on a path that had not been talked about in the campaign. FDR had campaigned on a program of frugality in government and ending alcohol prohibition, a platform that won him the presidency. Once taking office, he shocked the nation with a series of executive orders, among which was the confiscation of privately held gold.

The New Deal turned out to be something very different from what anyone would expect. He gathered labor unions, heads of large corporations, and rallied the three-letter agencies that had mostly a wartime founding, and cobbled together many more. He was going to beat back the depression through a form of central planning that had already become popular in Italy, Spain, and Germany.

Hazlitt was aghast and could no longer hold his tongue on the topic of economics. He had been a reporter on Wall Street for years and had read deeply in classical economic literature. He knew his stuff. He could immediately see that the administration was pursuing policies that would not fix the downturn, would create industrial cartels, and end in more privation for the American people.

He wrote that up in the pages of The Nation magazine, a traditionally Progressive voice. Hazlitt further warned that if the magazine endorses the New Deal program, it would abandon its Progressive ideals for freedom and democratic thriving and replace them with a quasi-fascist program of corporate privilege and government power.

A few weeks after writing this up, and engaging in a debate with another editor, he found himself out of a job. The Nation made its choice and it was not for Hazlitt’s point of view.

A few years later, he was writing unsigned editorials for the New York Times, a position he held from 1934. He was happy there and did his best. The paper was not as partisan back then as it is now. He even wrote signed book reviews almost weekly, many celebrating the opponents of New Deal economics. No one had an issue with it.

All that changed in 1944 when the Bretton Woods agreement was being cobbled together under the influence of John Maynard Keynes. The postwar monetary system would be rooted in a gold standard but only as it affected trade between countries. In the domestic realm, countries would go their own way while only settling account balances in dollars with a nominal gold backing.

Hazlitt predicted on multiple occasions, on the editorial page no less, that this system would not last. Governments that were free to print money would do so, especially the United States, and at some point in the future, the system would break down as available gold would not be enough to back the fiscal and monetary profligacy that the system would fail to restrain.

At some point, the publisher came to Hazlitt and said he had to stop saying these things. Bretton Woods was going to happen regardless and the Times needed to be on the right side of the issue. Hazlitt was once again out of a job. The monetary system later fell apart just as he predicted.

During his period between jobs, in the year 1944, he sat down over 10 days and wrote what would become the best-selling book on economics in the 20th century. It still sells well today. It is called “Economics in One Lesson.” Even now, there is no better way to get a handle on the topic. Reading the entire thing takes an evening or two. Not a huge investment of time. But the results are essentially civilization-saving.

Anyone who has read that book could have perfectly predicted all the events in the aftermath of 2020 lockdowns, and certainly the results of everything that has happened since the inauguration of the deeply unpopular President Biden. Every single bit of news we see coming out of the financial press today is an inevitable consequence of the policies they pushed.

Let’s just look at the latest bit of bad news. Personal consumption spending is edging downwards as consumers drain their savings and start to panic about making ends meet. They are eating out less, canceling trips, choosing cheaper items at the store, and rethinking purchases of durable goods. The squeeze is on as real income is flat and savings is being drained away.

Yes, this is all a sign of recession. It is coming surely as night follows day. The point at which the statisticians officially declare it is a minor detail at this point. As we approach November, it will be unbearably obvious that we face a stagflation as least as bad and probably worse than anything we’ve seen since the 1970s.

Every single thing about what’s happening right now could very easily have been anticipated by anyone with even a passing knowledge of basic economics. So to watch it all unfold in real time is especially painful because the pain we are experiencing is 100 percent man made, 100 percent preventable, and 100 percent predictable.

And yet we’ve learned that the people who do these things to us are shockingly unrepentant. Worse, they attempt to scapegoat everything else: the virus, Putin, Big Business, or the American people generally. One wonders: do they really expect anyone to believe them? Or have basic principles of truth and logic been so utterly shredded that lying with impunity is just the way we do things today?

Economics as a science has always frustrated a ruling class with the desire to implement unrestrained visions, simply because economics draws attention to hard limits on the ambitions of politics. No matter how many executive orders you issue, no matter how many press conferences you give, no matter how many reporters you have in your pocket, economic forces cannot and will not be made to disappear.

This is why the financial pages today are so packed with bad news. Worse, it appears that the existing regime is learning nothing at all from any of these things. We are in for a very rough two and a half more years.