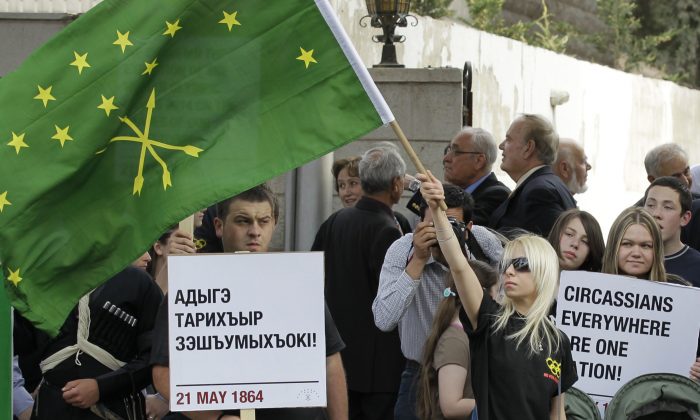 Members of Jordan’s Muslim Circassian minority hold banners and wave Circassian flags during a demonstration outside the Russian Embassy in Amman on May 21, 2012, to mark the 148th year since imperial Russian troops drove them out of their North Caucasus homes. (Khalil Mazraawi/AFP/GettyImages)
Opinion

The Tragic Legacy of the Circassians in Sochi

As the closing ceremony of the 2014 Winter Olympics in Sochi was broadcast, a little-known tragedy continues to be ignored: The terrible fate of hundreds of thousands of Circassians who inhabited that area. They were the victims of one of history’s greatest genocides.

Circassia, a fertile plateau in the northeastern region of the Caucasus, was located at the crossroads of Eastern Europe and Western Asia. The region extends between the Black Sea and the Caspian Sea. Historically, many Circassians considered Sochi their traditional capital city.

The events that took place were aptly described by Walter Richmond in “The Circassian Genocide.” Richmond wrote, “Circassia was a small independent nation on the northeastern shore of the Black Sea. For no reason other than ethnic hatred, over the course of hundreds of raids the Russians drove the Circassians from their homeland, and deported them to the Ottoman Empire. At least 600,000 people lost their lives to massacre, starvation, and the elements while hundreds of thousands more were forced to leave their homeland, and the Circassians had to become one of the first stateless peoples in modern history.”

Toward the end of the conflict, the Russian Gen. Yevdokimov was given orders to drive the remaining Circassians out of the region, mainly into the Ottoman Empire. In this way, Circassian tribal groups were resettled or killed en masse.

The long-lasting war ended with the defeat of the Circassian forces, and their leaders signed loyalty oaths to the victors on June 2, 1864.

Since the defeat, descendants of those killed fought for international recognition that genocide had been carried out against the Circassian people. In May 2011, the Georgian Parliament passed unanimously (95–0) a declaration that Russia had carried out genocide when it engaged in massacres against Circassians in the 19th century.
Today, the dispersed Circassians are found in several countries such as Turkey, Jordan, Iraq, Syria, Lebanon, Serbia, Egypt, and Israel. They are also found in Germany, Australia, the Netherlands, and the United States, in places such as New Jersey and California.

Circassians living in the diaspora have faced significant challenges in their efforts to maintain their identity and traditions, while keeping alive the memory of their homeland.
In what ethnic Circassians consider an insult to the memory of their ancestors, the 2014 Winter Olympic facilities in Sochi were built in areas that are considered to contain mass graves of Circassians killed by the Russians. Protests ensued and the Russian government responded by arresting eight prominent Circassian activists.

Despite the accusations, Vladimir Putin is proud that the Olympics took place without any major incident. He could have been more justly proud if he had acknowledged the historic roles that the Circassians played in that troubled region, and respected and honored their memory.