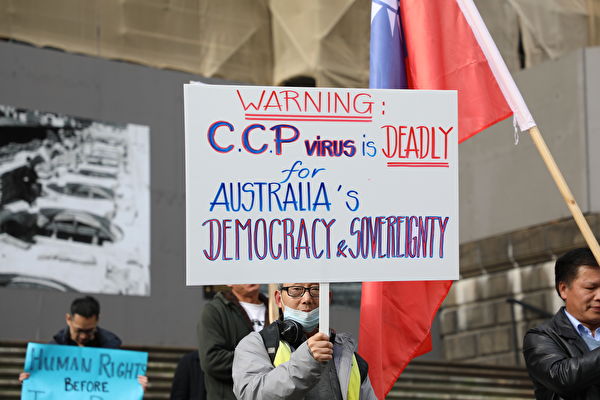 A pro-Beijing organization in Australia is a driving force behind a decade-long infiltration into the country, including promoting China’s controversial Belt and Road Initiative, Chinese government documents reveal.

As an Australian civil organization with close ties with the CCP’s United Front Work and Ministry of Foreign Affairs, AITA has launched extensive local events focusing on promoting the Belt and Road Initiative.

Since the BRI officially began in 2015, AITA has held forums annually across Australia to promote the BRI, according to the CCP’s foreign affairs documents obtained by The Epoch Times.

Wang is the Executive Vice President of China International Chamber of the All-China Federation of Industry and Commerce (ACFIC).

ACFIC is run by the United Front Work Department and encourages businessmen to invest in China and further integrate into the United Front, according to a report by the Australian Strategic Policy Institute.

From 2017 to 2019, AITA depicted the nature of the forum more straightforwardly.

In 2017, part of the original forum title was replaced by “Belt and Road Urban Development and Sister Cities Forum,” according to the official introduction. In 2018 and 2019, forums were defined as “Belt and Road in Australia.”

The BRI has come under scrutiny in Australia over the years and the 2020 forum was downgraded to a “Belt and Road” event hosted in Parliament of Victoria, Melbourne.

Australian Home Affairs Minister Peter Dutton said the BRI was a “propaganda exercise from China” during an interview with 2GB radio on May 21, 2020.

AITA didn’t respond immediately to a request by The Epoch Times for comment on its promotion of the BRI and its relationship with the United Front Work Department.

The Epoch Times published exclusive reports last year revealing the head of AITA, Michael Guo, had been working on mutual communications between China and Australia.

According to the AITA brochure, Guo has “actively contributed to nearly 60 pairs of friendship cities, among over 100 in total, between China and Australia.”

For the past six years, Guo has arranged for or accompanied Chinese and Australian officials to travel overseas, ranging from a few to more than a dozen times per year.

Australian PM to Call Off BRI, Cast Doubt on its Benefits

BRI’s lack of transparency and history of leaving borrowing emerging countries such as Sri Lanka in a “debt trap,” have constantly been questioned. The multi-billion-dollar deal is facing another setback in Australia.

Australian Prime Minister Scott Morrison recently said he may rip up the agreement signed by the state government of Victoria, the Herald Sun reported on Feb. 15.

Victoria is one of the six states in Australia, with Melbourne as its capital. The Prime Minister said he saw no benefit to Victoria’s deal with Beijing.

The statement is not the only pushback of Beijing’s retaliatory barley probe against Australia.

In May 2020, the CCP imposed high tariffs on Australian barley, the second-largest crop in Victoria, followed by suspending imports of Victorian logs in November 2020.

Early on June 11, 2020, Morrison urged the Victorian Premier, Daniel Andrews, to abandon the deal which was “inconsistent with the Australian government’s policy,” speaking with 3AW‘s Neil Mitchell.

On the other hand, the BRI did not prevent Beijing’s economic retaliation from spilling over to Victoria, since Morrison’s calling for an investigation into the origins and handling of the CCP (Chinese Communist Party) virus, commonly known as the novel coronavirus.

Under the new Foreign Relations Bill—passed on Dec. 3, 2020—state governments have until March 10 to inform the Federal government of all deals with foreign powers.