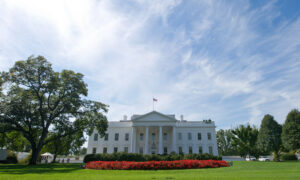 How to Restore Civil Society After the Elections
0 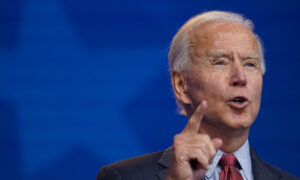 Why Biden Will Never Be President of 'All Americans'
0 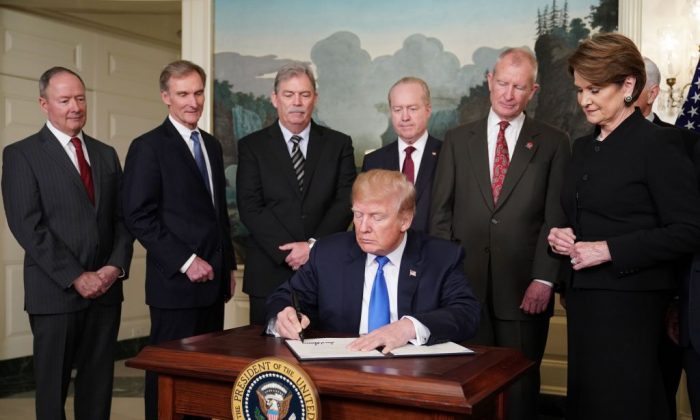 President Donald Trump signs trade sanctions against China in the Diplomatic Reception Room of the White House in Washington, DC, on March 22, 2018. The United States will impose tariffs up to $60 billion on Chinese goods to retaliate against the alleged theft of American intellectual property, Trump said. (MANDEL NGAN/AFP/Getty Images)
Viewpoints

The risk of a trade war between China and the United States has been simmering below the surface ever since Donald Trump became president in 2016. In early 2018, the word “risk” is gone, and the trade war has become a reality.

As usual, the mainstream media blames Trump for wreaking havoc on the stock market and disrupting the status quo the mainstream media loves so much. Yet the president is just fulfilling one of his campaign promises—and, in this case, a tougher stance against China is fully justified.

Does this mean that a trade war is great for everybody? Certainly not. It will almost definitely harm some players in the United States in the short term. But in the long term, China’s abusive practices just cannot be tolerated any longer. And China has more to lose.

The Rules of the Game

If you look at the current trade regime around the World Trade Organization (WTO) as a game, then under the rules of this game, the cards were stacked against the United States from the beginning, with China being allowed higher tariffs and more barriers to entry than the United States.

Supposedly, this was to help China develop when it joined the WTO in 2001, which may have been justified back then, when China was a relatively smaller economy. But it’s certainly not justifiable today, when China is the world’s second-largest economy.

It’s worth repeating here that the WTO trade regime is not free, and even its rules and stipulations create imbalances that should not be present under a real global free-trade regime, a system in which there is no government intervention in private-party transactions.

But under the current and imperfect trade regime, national governments and the WTO micromanage trade in what they perceive as a “fair” manner. Of course, the outcome of this micromanaging is never “fair,” but the objective is to create a somewhat level playing field that everyone can live with.

So if in this game you have one player who from the outset states he is not interested even in the flawed rules of the game, and whose goal is to cheat to beat and dominate the other players in the long term, then the logical choice is to withdraw from the game or hit the cheating player with penalties—and this is what the Trump administration is doing with China.

This makes the game less fun for everybody. But who sits still at a poker table when one player keeps pulling aces out of his sleeve?

In the case of China, the real outrageous and baffling finding is not that China is cheating at the trade game, but that they openly say so in their official policies and have been saying so for a long time. This began, at least, with Deng Xiaoping’s Project 863 in 1986, which aimed “to strive to achieve breakthroughs in key technical fields that concern the national economic lifeline and national security; and to achieve ‘leap-frog’ development in key high-tech fields.” That sounds innocent but the only way to solve the problem of the late-comer is by copying advanced technology from Western companies, which China did through outright theft and forced technology transfers.

In the more recent National Medium- and Long-Term Program for Science and Technology Development (2006–2020), for example, China wants absolute advantage in the production of advanced industrial goods—not comparative advantage, which enables different nations to specialize in certain products and then trade those among each other. Absolute advantage means China has the advantage in every industry it deems important, and it deems most advanced technologies as important.

In practice, these policies led to Chinese state-owned companies buying up foreign companies and their intellectual property, forcing technology transfer through joint ventures, outright stealing IP, and harassing foreign companies with anti-trust or monopoly lawsuits, while the regime denied market access to foreign firms, developed Chinese-only regulatory standards, and forced companies to produce locally, among many other mercantilist trade practices.

The United States Trade Representative Robert Lighthizer found precisely these and many other transgressions in his investigation under section 301 of the Trade Act of 1974, drawing on the research of many independent think tanks and the real-life experiences of many businesses.

The first step is to impose $50 billion in tariffs on Chinese products, which the trade representative finds is commensurate with the economic damage of Chinese mercantilist policies.

China has already threatened to retaliate, and this trade war could get messy, as the real world economic relationship is far more complicated than the poker game analogy, in which one player could just take his chips and go home. The tit-for-tat escalation of trade restrictions is also a far cry from the real free trade that the WTO era was supposed to usher in a few decades ago.

However, at this point, the United States doesn’t have a choice, as the only alternative to fighting back is a certain loss in the global game of trade.