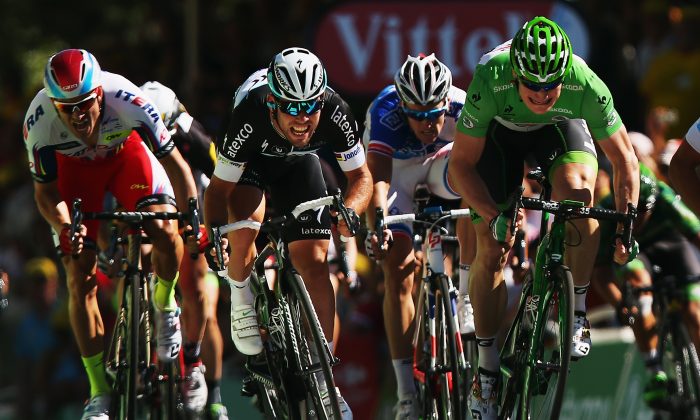 Mark Cavendish (C) of Great Britain and Etixx-Quick Step and Andre Greipel (R) of Germany and Lotto-Soudal sprint for the finish line during stage seven of the 2015 Tour de France, a 190.5km stage between Livarot and Fougeres on July 10, 2015 in Fougeres, France. (Bryn Lennon/Getty Images)
Cycling

During the first week the 102nd Tour de France progressed from the Grand Depart in Utrecht with two Time Trials, plus seven stages through Holland, Belgium and northern France. On Monday July 13 there was a deserved Rest Day for the riders and teams, before the next three mountain stages in the Pyrenees.

The Tour has been eventful. The crowds have lined the roads. This has to be the most watched sporting event. Two Yellow Jersey holders crashed out of the race: Fabian Cancellara (Trek Factory Racing) retired after Stage 3 (Anvers – Mur de Huy), along with six other riders, with injuries suffered during a crash-marred day. Later in the week, Tony Martin (Etixx QuickStep) who had fought so hard for the Yellow Jersey, suffered a similar fate, crashing close to the finish, on Stage 6 (Abbeville – Le Havre), effectively ending his Tour participation. On both occasions, Chris Froome (Team Sky) acquired the Yellow Jersey.

Froome and Team Sky looked strong in the first week of racing. This week, was about staying safe, but Froome has looked safe and strong. Vincenzo Nibali, on the other hand, who was expected to do well on these stages, lost time throughout the week. By Stage 8 (Rennes – Mur de Bretagne) Nibali was 1m48s behind Froome. Nairo Quintana (Movistar) was 1m56s behind. Both Nibali and Quintana have significant time to make up. Alberto Contador (Tinkoff-Saxo) was 36s behind Froome, and looking ominous. Outside of the Big Four, Tejay van Garderen (BMC Racing) was looking a potential podium finisher (13s behind); whereas Thibaut Pinot (FDJ.fr) was 6m33s behind, and his potential challenge appeared to have evaporated. In the first week, other than Cancellara and Martin who were wearing yellow, all other aspiring to yellow stayed safe.

There is more to contest for the Green jersey. The flatter undulating stages in week one favoured the sprinters. The imperious form of Andre Greipel saw him win two stages (Stage 2, Utrecht- Zeeland and Stage 5 Arras – Amiens), but despite holding Green for most of the week, Greipel passed the jersey to Peter Sagan after Stage 8. Sagan wears Green into the mountains. Sagan’s consistency in each stage gives him the edge on Greipel in the Points classification. Sagan has 213, and Greipel 210. Mark Cavendish (Etixx QuickStep) is on 159 and John Degenkolb (Giant Alpecin) on 158.

Cavendish won his first stage since 2013, winning Stage 7 (Livarot–Fougeres), with a perfectly timed pounce for the line. His joy was palpable after two near misses earlier in the week (on both occasions to Greipel). He now has 26 stage victories on the Tour, and is third on the all-time list, behind Eddie Merckx (34) and Bernard Hinault (28).

Such is Sagan’s consistency, that he’s not only the Green jersey wearer, but also the White Jersey for the leading Young Rider. Tom Dumoulin (Giant Alpecin), the earlier White Jersey wearer, withdrew injured after the heavy crash in Stage 3. And after Stage 8, Sagan was second in the Yellow Jersey classification.

Although the stages in the first week were flat, there were a limited number of mountain points on offer. After winning Stage 3, climbing the Mur de Huy, Joachim Rodriguez (Katusha) wore the Polka dot jersey. Daniel Teklehaimanot (MTN Qhubeka), the best climber in the Criterium has been in red and white since Stage 6 (Abbeville – Le Havre). This is the first time an African rider has ever worn a coveted Tour jersey. It was pulled on with pride on the podium, bringing joy to Eritrea.

After a week that took its toll with riders crashing, with Stage 3 neutralized on three occasions for medical and safety reasons; and the fastest stage time on record by Rohan Dennis; plus strong crosswinds; tricky cobbles; a whiff of scandal; and enough hills to warm-up the General Classification riders, Chris Froome was in Yellow, Sagan in Green and White, and Teklehaimanot in the Polka Dot.