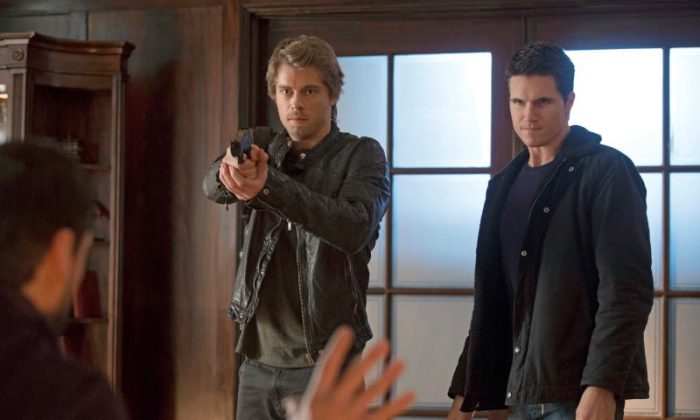 The Tomorrow People Season 1 Spoilers: What Happens in Episode 17, ‘Endgame’?

The Tomorrow People on CW Network has a new episode airing on Monday night, titled “Endgame.”

For one, Stephen stumbles upon a clue that the Tomorrow People have been desperately searching for, according to the official description.

Also, John and Russell learn about the dangerous plan that Jedikiah has in the works, “but no one could have predicted the ultimate outcome.

Meanwhile, Cara gets a lead on a new break-out, but is shocked to discover that it’s someone from her past.

Cassandra also returns in episode 17, according to Robbie Amell (Stephen).

“Episodes 16 and 17, we kind of steer away from the love triangles because 16 is this calm before the storm that is our final 6 episodes, and then [in] 17, Cassandra’s back,” he told E! News.

“I talked to the writers about it – I was always pissed off when Cassandra saved Stephen’s life and he just walks away from it. He doesn’t help her because he can’t, but it’s just so against everything that Stephen stands for in the first 15 episodes. So a nice thing is, Stephen gets a chance to return the favor and help protect and save Cassandra, and that really leads to a massive showdown in 17 with one of the biggest fight scenes we’ve had so far this year.

Check out a trailer and photos below and the descriptions for the next two episodes below that.

“Fed up with Jedikiah’s (Mark Pellegrino) constant lies about his father, Stephen makes a choice about his alliances. Trusting in Ultra and Hillary (guest star Alexa Vega), Stephen wants to bring in a break-out to Ultra to see if things have really changed, much to Cara’s dismay. Meanwhile, Stephen’s brother (guest star Jacob Kogan) goes missing after Jedikiah forces Stephen to protect him.”

“Julian (guest star James Mackay) is back and angrier than ever, but when he gets caught by Ultra he is forced to strike a deal that could cost his and Stephen’s lives. John once again disobeys Cara’ orders when he learns the Julian has discovered the location of the Tomorrow People’s lair. Meanwhile, Astrid is plagued by nightmares after her near-death experience and turns to her new friend John for some comfort.”