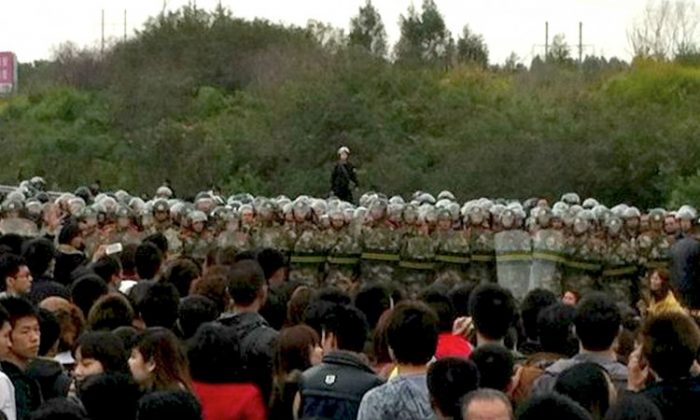 Chinese residents confront riot police as they protest along a highway to demand a coal-fired plant be moved, in Haimen Township in southern China’s Guangdong Province on Dec. 20, 2011. Mass protests in China are a daily occurrence. (STR/AFP/Getty Images)
Opinion

The Ticking Parcel Passes to a Helpless Xi

In democracies, voters can choose to reject the legacy of a party or a leader and to chart an entirely new course. Nations can renew themselves.

When the Chinese Communist Party (CCP) changes leadership, events are more constrained. Each leader must carry forward the legacy the Party hands off to him, and the burden of the Party’s history limits future possibilities.

Next week, Washington will welcome the man ticketed to lead the fifth generation of the CCP to rule China, as Vice Chairman Xi Jinping will meet with President Obama on Feb. 14.

Xi’s assumption of leadership of the CCP at the 18th National Congress will be looked at by many as a new beginning. Having the privilege of observing events in China from the outside and over time, I see Xi’s elevation in terms of certain persistent continuities that have defined the Party.

Forty-three years ago, I first became aware that there was an alternative to the Party, an outside world against which the Party’s actions could be judged. In 1969, like millions of middle and high school students across China, I was sent to the countryside. Leaving behind my native Shanghai, I carried one shortwave radio with me.

It took me several months to get all the parts from different surplus stores and then put them together. When I finally tuned the radio, I heard a totally different voice. Unlike the firm, righteous, and authoritative voice that we heard every day at that time, it was soft and friendly. I immediately realized that it was the Voice of America.

In our small circle of friends who had the same hobby of assembling our own radios, listening to VOA was no secret. But it was dangerous, and listening to the “enemy radio” could even lead to jail.

Today, listening to the VOA is no longer a crime (although the station’s programs are still jammed), but installing a satellite dish to watch the New York-based New Tang Dynasty TV caused one Guangxi Province resident to get slapped with a three-year jail sentence.

In 1972, three years after my move to the countryside, a U.S. president for the first time personally met a CCP leader—Nixon visited China.

When Nixon came to China 40 years ago, there was a criminal charge called “speculation and profiteering.” Actually, anyone who sold a product he did not make could be charged with this crime. All trade was strictly monopolized by the state.

Today, trade is no longer a crime. But in many financial fields, the state still holds exclusive control, and woe betide anyone who crosses the line.

At 24 years of age, the precocious Wu Ying was listed as China’s sixth-richest woman. An independent venture capitalist, she was a dangerous step ahead of the times. Last year, at the age of 30, she was sentenced to death. Her crime: She had raised 770 million yuan (approximately US$122 million) from 11 relatives for investment into various businesses.

She was first charged with “illegal fund-raising”; then the charge was changed to “financial fraud.” Her appeal was denied just last month.

None of relatives who had loaned her money felt victimized by her. She provided the same service as the Chinese stock market, allocating funds to cash-hungry businesses, with one important difference. If the state hadn’t interfered, her investors would have gotten their money back, with interest, which investors in the Chinese stock market never seem to do. Maybe that’s the real reason behind her death sentence.

Forty years ago, China was in the middle of the Cultural Revolution. While Mao used the revolution to destroy his former comrades, most of the “enemies of the state” targeted were drawn from the enemies of the communist revolution and identified by class according to Marxist ideology: land owners, business owners, and “counterrevolutionaries.”

Even the so-called rightists were the survivors of the “old” culture, educated people from before the 1949 “liberation.”

Today, most of the “enemies of the state” have been born, raised, and educated under communist rule. These include Falun Gong practitioners, petitioners whose homes or land was confiscated, democracy activists, human rights lawyers, outspoken artists, and even the Tibetan monks and nuns who set fire to themselves.

In other words, the CCP has created its “enemies” during its 62-year-long rule. Compared to 40 years ago, the “enemies” are everywhere and are much more diversified. There is almost no way to identify them. Or should we say, the Party has become everyone’s enemy?

Forty years ago, the West had little idea about Mao Zedong and Zhou Enlai. Today, the West knows little about the new generation of leaders headed up by Xi. The whole Party operation is still a black box.

The CCP leaders don’t pick their successors like leaders in a normal country. They don’t ask who is best for the job. They ask who is least likely to hold them responsible for their crimes.

Mao handpicked Hua Guofeng as his heir for the obvious reason—his loyalty to Mao.

After Mao’s death, Hua arrested Mao’s wife and her gang, ending the Cultural Revolution, but Hua remained true to Maoism.

Deng Xiaoping was the greatest innovator following Mao, in part because the situation he faced was relatively simple. He made one change at the top, easing Hua out of power. And he made one change in policy, jettisoning Maoism while opening up the economy.

But in doing so, Deng never directly attacked Mao or the crimes of the Mao era. He accepted this legacy as something that couldn’t be challenged, and when he surrendered power, this burden passed to his successors.

Deng Xiaoping picked Jiang Zemin because Jiang was implicated in putting down the 1989 student movement. Deng knew that Jiang could never put Deng on trial for the Tiananmen Square massacre.

Jiang Zemin, just like his predecessor, couldn’t stay away from creating more enemies. He started to persecute practitioners of Falun Gong, the spiritual practice, in 1999.

Even though Jiang didn’t have the power to pick his own successor, he still managed to keep enough of “his” gang members in the Politburo Standing Committee. This is one of the reasons that his policy of persecuting Falun Gong practitioners continued after Jiang’s retirement. It is also why the fourth generation leadership didn’t want to make any changes, for better or for worse.

During Hu Jintao’s rule, he has broken one pattern. He hasn’t initiated any giant new crimes against humanity like Mao’s Cultural Revolution, Deng’s Tiananmen massacre, or Jiang’s persecution of Falun Gong. At the same time, though, Hu has also failed to stop or correct the crimes he inherited.

Hu is locked into a poisonous status quo. As the enemies created by the CCP multiply, the CCP’s need for “stability” increases, and Hu’s high-pressure strategy for maintaining stability has worsened every case of human rights violations.

The nine-member Standing Committee of the Politburo is an image of paralysis: People in the outside world can hardly tell any difference among eight of them, with Wen Jiabao as the only exception. Wen can advocate political reform over and over because everyone knows that he won’t be able to change anything.

The top of the Party is like a thick mud puddle, in which nothing can make even a small ripple. But out of sight underneath could lie a volcano.

The choice of Xi Jinping represents an innovation in the selection of Party leaders. It goes without saying that he will continue the practice of not holding his predecessors accountable—these problems can’t now be fixed without destroying the Party.

Xi was chosen for another reason. The Party’s leadership is now an enormously wealthy, privileged class jealous of its station. Xi’s job is to make sure that the interests of every important family are taken care of. He has been selected not to change things but to preserve the status quo.

There was a story told in China about why Mao decided to establish relations with the United States. When he started the Cultural Revolution, he got help from the Red Guards. Next, he sought the support of the workers to get rid of the Red Guards, and then he got support from the army to suppress the workers.

After his most loyal supporter, Lin Biao, abandoned him, he had no choice but to turn for help to his enemy, the United States, because he had nobody else to turn to.

The well-connected CCP intellectual Zhang Musheng told Reuters in an interview last year: “This attitude of doing nothing and always waiting and waiting is wrong. It’s like playing ‘pass the parcel’ with a time-bomb.” Pass the parcel is a British children’s game similar to musical chairs. When the music stops, one child gets stuck with the parcel.

Xi’s visit to D.C. is a prelude to his time on the great stage. The music is getting ready to stop, and the ticking bomb fashioned by over 60 years of Party rule will be thrust into Xi’s hands. But this time, neither Xi nor anyone else knows what to do with it. Unlike Mao, the new leadership has nobody to turn to for help.