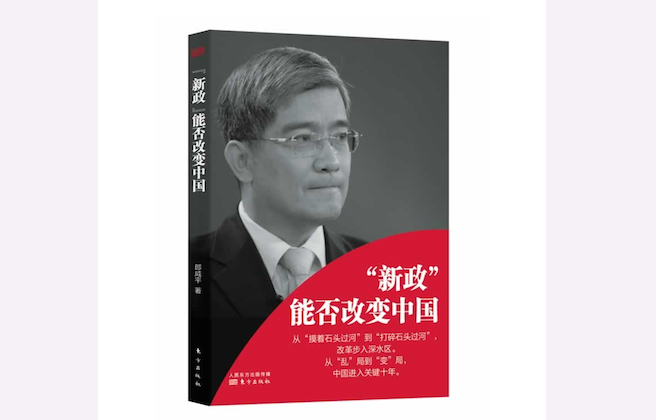 Hong Kong-based economist Larry Lang on the cover of his latest book “Can the 'New Regime' Change China?" in which he takes a look at the alarming extent and forms of corruption in China. (dangling.com)
Opinion

The 3 Types of Corruption That Plague China

This article is a translated excerpt from a new book by Larry Lang, a Hong Kong-based economist, titled “Can the ‘New Regime’ Change China?” published in April.

Corruption is being talked about in China every day. Here I will approach the topic from a new angle.

The other is the Ministry of Railways under Liu Zhijun, where director general posts had increased by 400 percent at the time when he stepped down.

Everyone knows that over the past decade, the number of applicants for civil servant positions in China has increased 11 times. In 2003, the number of candidates who passed the final exam was 1.25 million; the ratio of passing was 1 out of 23. In 2013 there were 1.52 million candidates who passed the exam, and the ratio of passing was 1 out of 80. The most sought after position (investigation clerk at the National Bureau of Statistics, Nanchuan branch) had a passing ratio of 1 out of 9,470. The main source of applicants were new college graduates.

Russian Prime Minister Dmitry Medvedev once made this statement: “The phenomenon of young people wanting to become public servants worries me. When a young man firmly chooses the path of a public servant, we must ask some questions. Is this a prestigious profession? It doesn’t seem so. Does it pay much? That’s not true either. So, why do they choose such a career path? It’s because it’s a quick way to get rich. Therefore, public servant careers are very popular in Russia. It indicates that Russia has a serious corruption problem.”

A 2011 survey indicated that more than half of the people aged between 18 and 30 thought that becoming a civil servant is better than becoming a businessman. It looks like young people in Russia and China are eager to become civil servants. Why? It’s because these two countries have very serious corruption problems.

So how should we understand and analyze the corruption problem in China? I will put forward a brand new concept, derived from Alexis de Tocqueville’s “The Old Regime and the French Revolution,” recommended by Wang Qishan, secretary general of the Central Commission for Discipline Inspection.

According to the book, corruption was a very serious problem in France before the outbreak of the French Revolution in 1789. Corruption there could be divided into three categories: the expenditure type, the approval type, and the selling-of-posts type. These three forms of corruption are very different from what we commonly understand; they are more advanced. I will explain them in detail.

In expenditure type corruption, officials directly handle infrastructure projects and thereby carry out abuse of power and corruption. Let me give an example. In 1789, the French government’s debt was around 4.5 billion livres. Its annual interest payments was 300 million livres. But how much was the French government’s fiscal revenue? It was only 500 million livres. Was it really necessary to borrow so much to build roads and ports? No, it borrowed that much because officials were able to get illegal payments and kickbacks through these projects. They only cared about their own personal interests, and didn’t consider whether that government spending was necessary.

The first is relying on a middleman to seek payments. For example, during former minister of railways Liu Zhijun’s eight-year tenure in office, he built more than 7,000 kilometers of high-speed rail with a total investment of 3 trillion yuan (US$486.6 billion). How did he do that? From 2007 to 2010, 23 large state-owned enterprises, through a go-between businessmen, Ding Shumiao, obtained more than 50 projects from Liu. The Chinese government spent a total of 178.8 billion yuan (US$29 billion) on these projects. Ding made 2 billion in profits from it, of which she paid 49 million to Liu. During Liu’s trial in September 2013, she explained that the money was bribes to Liu.

The second group of expenditure corruption works by nurturing your own cronies in state-owned enterprises to directly receive bribes on the spot. For example, when former director of State-owned Asset Supervision and Administration Commission, Jiang Jiemin, became chairman of the China National Petroleum Corporation, he gave all the lucrative positions in the company, such as oil exploration, overseas investments and acquisitions, and equipment purchases, to his cronies. According to media reports, CNPC’s 2011 capital expenditure for exploration and production was 162.154 billion yuan (US$26.3 billion). In 2012 it grew to 227.2 billion yuan (US$36.85 billion), and finally reached 240 billion yuan (US$38.93 billion) in 2013, when its corruption network was being uprooted.

Was the yearly expenditure increase really necessary? How much of these expenditures were used as bait for power abuse?

Let’s look at the second category, the approval type corruption. Before the outbreak of the French Revolution, the King sent 30 governors and their agents throughout the country to become local chief administrators. This meant they had approval authority. The French central government managed everything of local governments 30 to 40 years before the Revolution; everything had to go through approval. For example, if a local municipality wanted to build churches or roads or even shelters, it had to get the approval of the governor, who used that authority to seek money and bribes for himself.

In 2003 the City of Changde in Hunan Province wanted to build a power plant, but it couldn’t pass the NDRC, or more accurately speaking, the approval of Liu Tienan. In 2012 there was no hope of getting the project approved. A vice governor of Hunan went to intercede with no result. When Liu visited Hunan later that year, the first and second governors initiated, and finally obtained, approval from Liu. After this, it required a feasibility study for equipment selection, engineering plans, construction plans, and technical plans. In addition it also needed land and environment protection, water and soil protection, plant access, a bank loans study, as well as supporting documents from the Ministry of Land and Resources, the State Environmental and Protection Administration, the Ministry of Water Resources, the National Grid and Banking Corporation. This whole process consumed 20 million yuan in bribery to large and small officials in order to complete the power plant project.

That’s not all. After becoming politically influential, He Hongda began selling government posts for money. From 1997 to 2004, He had promoted six low-level and mid-level employees within the Harbin Railway Bureau. There were quite a few lucrative posts under his charge, such as the office director of Car Management Office, the chief operating officer of Harbin Railway Bureau, and others. These posts were sold quite a few times. He earned a total of 14.5 million yuan (US$2.3 million). If the $100,000 that He gave to Liu was considered to be his “initial investment,” He subsequently earned a return of 150 percent annually from selling posts.

Let me give you some more staggering data. Before Liu Zhijun took the helm at the Railway Bureau, there were only 500 bureau-level cadres. When Liu stepped down, there were 2,000.

Selling government posts for money should be seriously dealt with in China. Once this corruption becomes an industrial chain, it will become a systematic pattern. Corrupt officials would then be in every department and post, with spending and reviewing all tainted by corruption. What’s more, the corruption of selling government posts is detrimental to the development of the country as a whole.