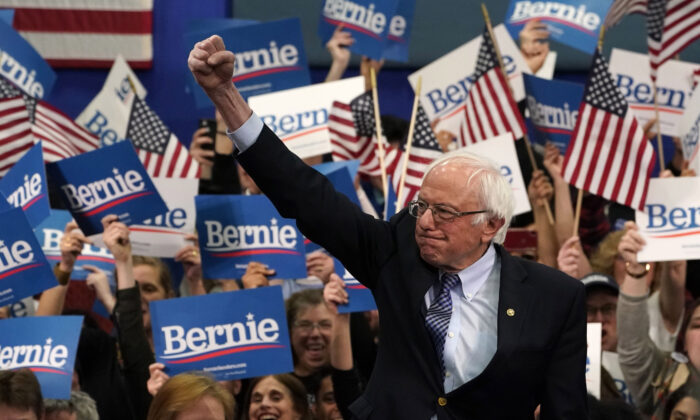 The 2020 Democrat presidential primary is rounding into shape after nearly a year of campaigning. While some may be surprised that Sen. Bernie Sanders is in the lead and Joe Biden is fading from view, the signs have pointed to that for a long time. The only question now is whether the Democrats not named Bernie Sanders can stop Bernie Sanders.

There are three reasons they may not.

3. The Democrat Party Has Moved to the Left

The Democrat party is deeply split. While it is true that the party has moved further to the left for decades now, during the Trump presidency, that move left has accelerated considerably.

Perhaps the greatest driver of that recent acceleration has been the 2020 presidential hopefuls. With so many entrants into the field, made possible by modern media and the internet, it was predictable that there would be a competition among the Democrat candidates to propose huge tax and spend policies—just to get noticed among the crowd. Indeed, I predicted that competition in January 2019.

It’s not just the candidates that have moved left—the Democrat primary voters have as well. Between Sanders and Sen. Elizabeth Warren, they garner somewhere between 30 percent and 44 percent of the primary vote. The fact that such high percentage of the Democrat voters are that far left gives Sanders a potential huge base of support and will be key to him winning California, with its huge delegate haul.

By the way, there are some who are saying that Sanders received greater vote totals and percentage in 2016. Keep in mind, however, that that was a two-person race, and much of Sanders’s vote was a protest vote against Clinton and the way the 2016 race was run by the Democrat establishment.

2. There Are Too Many So-Called Moderates

Overall, Sanders is in prime condition. He is consolidating the far-left wing of his party as Warren, his only rival for that vote, continues to crater. As Warren begins to fade and her support moves to Sanders, that places him in position to consistently get between 25 percent and 35 percent of the vote in any one state (and perhaps more)—assuming not all of Warren’s support goes to Sanders.

As a result, unlike the costs of his proposed programs, the math for Sanders winning or placing second in every contest is simple. While he is garnering between 25 percent and 35 percent of the vote in each primary, the other 65 percent to 75 percent is being divvied up between Pete Buttigieg, Sen. Amy Klobuchar, Michael Bloomberg, Tom Steyer, and Joe Biden. Five contenders for the remaining vote means it will be very hard any one of them to beat Sanders in any one contest, let alone consistently.

1. Sanders Is the Only Candidate Who Has Run Before

It was also predictable that Sanders would have a leg up on his competition in the crowded field that was and still is the Democrat primary. It is no small benefit to be the only candidate to have run nationwide in a presidential contest. At the outset of the 2020 race, Sanders had campaign infrastructure no other Democrat had, including nationwide email lists, fundraising lists, and volunteer lists. Sanders had that infrastructure in every state. Indeed, he actually has had a presence in some states for the last four years.

Contrast that with Buttigieg and Klobuchar. After her third-place finish in New Hampshire, Klobuchar announced she was “expanding” her campaign in other states.

What that really meant was that she was beginning her campaign in other states by hiring staff and collecting volunteers. She couldn’t afford to do that before. She had to use virtually all her money in Iowa and New Hampshire or face plunging fundraising numbers and risk having to drop out of the race (see Joe Biden). Buttigieg was and is in the same boat.

Indeed, it is quite possible that Sanders’s contenders will have to forego competing in some states because they don’t have resources to compete everywhere. Remember, John McCain won the nomination in 2008 while skipping several contests, including Wyoming, the second primary that year. Mike Huckabee finished in second four years later skipping contests as well.

While those candidates and others are assembling their staff, Sanders’s volunteers have been concentrating on contacting voters to get them to the polls. That difference could make all the difference in the world between winning and coming in second or third.

In sum, Sanders has three important advantages his rivals don’t: 1. He has a hold on a significant amount of the party, while 2. too many rivals divide up the remainder of the party, and 3. he has a campaign infrastructure that is tried and true. All of that is why Sanders will have the most delegates in the Democrat race after Super Tuesday and beyond.