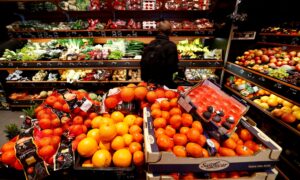 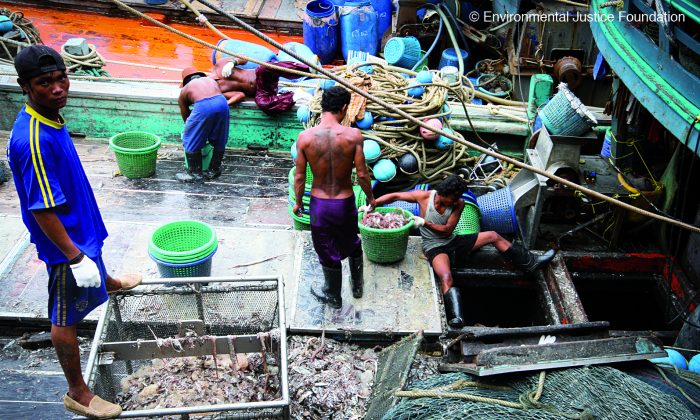 Workers on a Thai fishing boat. A foundation investigating pirate fishing found evidence of human trafficking, labor abuse, and the use of violence in the Thai seafood industry. (Courtesy of Environmental Justice Foundation, www.ejfoundation.org)
International

The Threat of Pirate Fishing to the World’s Fisheries

Illegal, unreported, and unregulated fishing—better known as pirate fishing—is one of the biggest threats to the worlds’ fisheries.

“Pirate fishing operators are devastating fisheries and marine biodiversity, stealing from some of the poorest on our planet, ruining livelihoods and damaging the security of our marine environment,” said Steve Trent, Executive Director of the Environmental Justice Foundation (EJF) in an email.

The foundation works with local communities to build up a network and effective surveillance of pirate fishing vessels, such as in the Sherbro River area of southern Sierra Leone where the foundation has worked since 2009 to document pirate fishing.

”In Africa alone, over US $ 1 billion is lost every year to pirate fishing. This is not only having a devastating effect on our oceans and marine life but also on countless vulnerable people in remote communities in developing countries whose livelihoods and food security are being severely threatened,” said Trent.

Pirate fishing around the world is estimated to be worth US$10-23 billion annually.

According to Trent, the foundation has also documented extreme human rights abuses on-board illegal fishing vessels, from child labor to human trafficking and even murder.

”Most recently, EJF gathered testimonies from Burmese workers, as young as 16, who were trafficked in to Thailand and forced on to fishing vessels. Until their rescue months later, they were subjected to arduous, often violent working conditions without pay,” said Trent.

Thailand’s seafood industry employs more than 650.000 people and exported seafood worth US$ 7.3 billion in 2012.

To highlight the piracy fishing problem the foundation launched a campaign called “Save the Sea” last year, together with the help of thirteen participating restaurants.

This year 31 leading international restaurants agreed to work with their customers in June to raise awareness of sustainable fish and to contribute to EJF’s campaign.

”One-O-One is delighted to be supporting EJF’s campaign. As a Chef, keen fisherman and someone who grew up on the coast, I am truly passionate about fish and seafood and I am dedicated to finding ways to create inventive dishes for the One-O-One menu that use fish and seafood as sustainably as possible,” said Pascal Proyard, Executive Head Chef of One-O-One, in an email.

The guests were able to add an optional £1, €1 or 10 HKD donation to EJF throughout June and the restaurants serve only the highest quality, sustainably sourced fish.

”Ensuring we preserve our precious fish stocks is so important to me because I want my son to grow up enjoying fish and seafood just as I do. Campaigns such as this are vital in raising awareness of a growing issue and ensuring the enjoyment of fish and seafood for generations to come”, said Proyard.