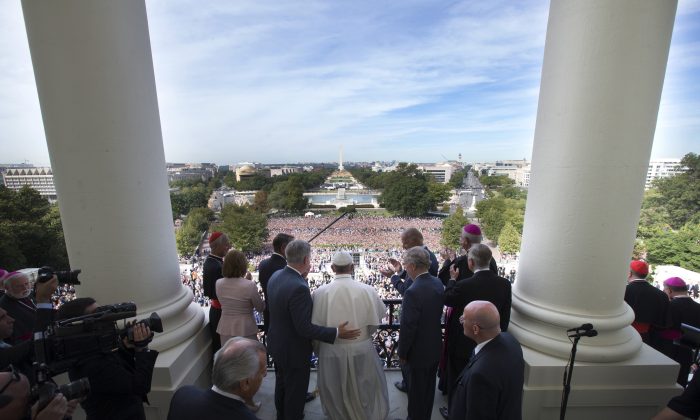 Pope Francis is welcomed to the Speakers Balcony at the U.S. Capitol by members of congress in Washington, D.C., on Sept. 24, 2015. (Doug Mills/Getty Images)
Opinion

On Sept. 10, I attended a NYPD SHIELD conference with over 500 law enforcement and private security professionals at One Police Plaza in New York City.

The agenda for the event focused extensively on Pope Francis’s visit.

During his opening remarks, Commissioner William Bratton stressed that American law enforcement, specifically the NYPD, have an unprecedented security challenge later this month.

Bratton stressed that it would be the first time that the U.N. General Assembly, had simultaneous visits by Chinese head of state Xi Jinping and the pope.

Compounding these security complexities, with the United Nations event alone involving leaders from 170 countries, Bratton also noted that the Jewish high holyday of Yom Kippur and a Central Park concert with an estimated 100,000 people will also be taking place.

Each of these events demands meticulously orchestrated security principles of prevention, mitigation, preparedness, response, and recovery.  But with Pope Francis at the same time often making spontaneous encounters with people, the need for impeccable vigilance is intensified further.

Honoring the NYPD SHIELD information sharing concept, I gave a briefing on Sept. 17 to 100 members of the Bergen County Police Chiefs Association (BCPCA) in New Jersey.  The attendees included police chiefs from over 70 jurisdictions and the FBI.

It has been my privilege to serve the BCPCA as a committee spokesman addressing issues of leadership, violence prevention, crisis planning, and community policing at monthly meetings for the last 12 years.

During my briefing I shared concerns from the NYPD SHIELD conference and disseminated copies of my Feb. 27 Epoch Times article titled “Terrorism Concerns Accelerate: Protecting America.”

Although Pope Francis is an inspirational leader of forgiveness, compassion, and charity to many religious persuasions and nonbelievers as well … there are individuals with nefarious intentions.

Although Pope Francis is an inspirational leader of forgiveness, compassion, and charity to many religious persuasions and nonbelievers as well, I stressed to the BCPCA that there are individuals with nefarious intentions.

The commander of the Vatican security forces has confirmed “the threat exists” against Pope Francis from ISIS, although he stated “We know of no plan for an attack against the Vatican or the Holy Father.”

Pope Francis personifies everything that not only the ISIS despises, but he is also a target for others who would profane religion to justify violence including al-Qaeda, Boko Haram, al-Shabab, or others with a demented agenda, including lone wolf assailants.

Recently, the FBI arrested a 15-year-old boy outside of Philadelphia for allegedly threatening an ISIS-inspired assault on Pope Francis while he tours America.

The May 13, 1981, attempted assassination of Pope John Paul II, who was seriously wounded by gunfire in Saint Peter’s Square, is a horrifying reminder of hate, violence, and depravity.

The assailant, an escaped Turkish murderer, fired four shots at the pontiff, one of which hit him in the abdomen narrowly missing vital organs; another shot hit his left hand.

After being rushed to a Rome hospital, the pope underwent more than five hours of surgery and survived after being listed in critical but stable condition.

Although the motives of the assailant remain obscure, one lesson is painstakingly obvious, that a pope is a possible target of assassination.

The visit of Pope Francis has been deemed by what the Department of Homeland Security labels a “national security special event” and will be under the command of the Secret Service.

Protecting the pope will be an incredible task demanding collaboration of the NYPD, Secret Service, FBI, Department of Homeland Security, many other law enforcement agencies, and private security professionals.

Complementing these dedicated professionals, the vigilant eyes, ears, and voices of the public are also critical to protecting Pope Francis and other possible soft or high profile targets representing our cherished way of life.

Although there is no specific or credible threat at this time, let us be vigilant in protecting Pope Francis and safeguarding our homeland for to be forewarned is to be forearmed.