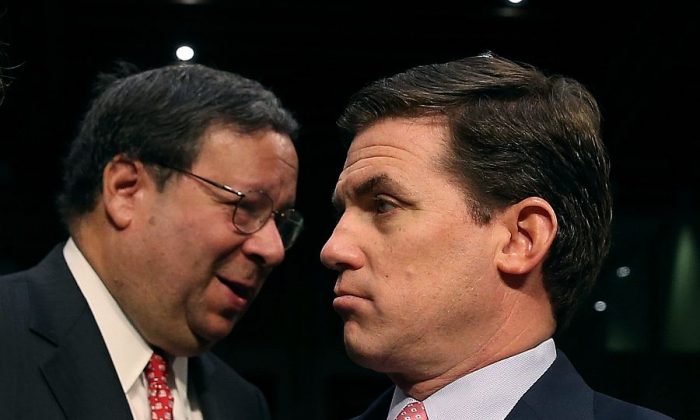 Economic inequality has emerged as the central political challenge of the 21st century. Left wing academics and politicians are quick with quack remedies—higher taxes on the wealthy that I believe will only send more investment abroad and smother growth.

For most Americans, good-paying jobs are scarce, and many feel powerless to improve their lot. Yet, for those at the very top of business and in a few charmed professions, things have never been better.

Vermont Sen. Bernie Sanders (I) recently asked Federal Reserve Chairwoman Janet Yellen, “Are we still a capitalist democracy, or have we gone over into an oligarchic form of society, in which incredible economic and political power now rests with the billionaire class?”

Yellen deflected, saying she preferred not to assign labels, but Sanders struck a nerve.
Russia’s oligarchy has two salient characteristics. The government uses its power to regulate markets to concentrate wealth in the hands of an influential few, while most of its citizens stay poor by Western standards.

In recent decades, the federal government has enabled monopolization in many industries—for example, in cable TV and high-speed Internet, banking, and health care—by failing to use its antitrust and regulatory powers to curb abusive practices.

Comcast enjoys monopoly access to most homes it services. Each year, it raises rates for cable TV bundled with high-speed Internet faster than the rate of inflation, because federal policies prohibit local governments from regulating cable prices as they do for electric and water utilities.

Its fee structure discourages subscribers from purchasing only high-speed Internet and independently obtaining entertainment content over the Net. Now Comcast proposes to acquire Time Warner Cable and establish a virtual national monopoly, giving it huge bargaining leverage with content providers, such as ESPN, Turner and Fox, even though it already owns NBC.

Comcast is transforming a public utility into an international media giant on the backs of overtaxed subscribers. Yet federal regulators will likely approve its acquisition of Comcast, because it has “close ties” with the Obama White House, in my opinion.

Similarly, Dodd-Frank financial reforms impose regulatory costs so onerous that small banks are selling out to bigger ones. In the bargain, small business loans and mortgages are tougher to obtain, and grandma can’t get a decent rate on CDs. Bank executives pull down huge bonuses but also make generous contributions to political candidates.

“Obamacare” has effectively monopolized many local markets for health insurance and hospital care, and reinforces pharmaceutical companies’ ability to charge higher drug prices than prevail in other wealthy countries like Germany and Holland.

All are great vote-buying schemes financed by heavy taxes on most upper-income Americans.

But those politicians skillfully exclude from those high taxes the very top of the 1 percent—the oligarchs in communications, finance, and other industries are often paid in stock options, which are subject to much lower capital gains tax rates.

A recent Wall Street Journal poll found the majority of Americans view the economic and political system stacked against them, and most are dissatisfied with Obama’s handling of the economy.

Meanwhile, the economics profession—composed mostly of left leaning academics—is enamored with French economist and author Thomas Piketty’s thesis, in the new bestseller, “Capital in the Twenty-First Century,” that growing inequality is the natural outcome of capitalism and confiscatory taxes are the answer.

Both notions are wrong.

I believe Washington corruption—in the pattern of Vladimir Putin—is driving inequality and sinking family incomes. Higher taxes may catch your family doctor in the near future but politicians will still find a way to exempt their supporters among the very wealthy.

Politicians offering ordinary voters a free ride on taxes, subsidized health care, and other enticements are really picking their pockets by giving the country away to the oligarchs.