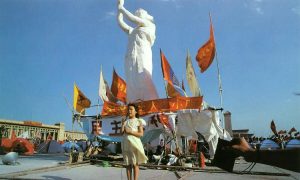 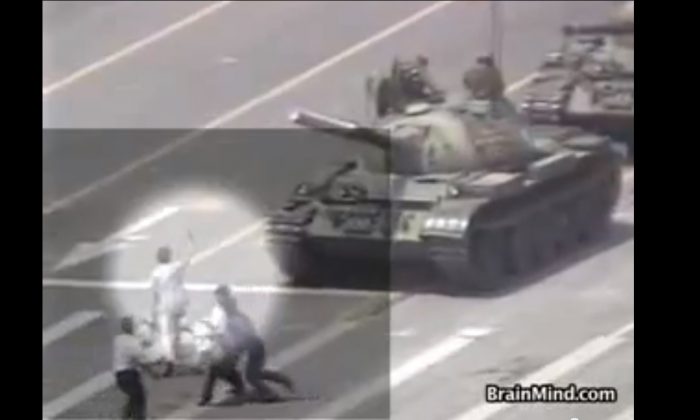 A screen grab from a video shot of the Tank Man shows two plain clothes police grabbing him and starting to hustle him off the boulevard.
Opinion

A Son Lost, a Regime Exposed

Heroes of Tiananmen Square, Where Are They Now?

The Tanks of Tiananmen Crushed Idealism, Too

A Death on Tiananmen Staged to Peddle a Lie, Witness Says

People still ask what became of the Tank Man.

On the morning of June 5, 1989 a young man wearing a white shirt and carrying two shopping bags strode to the middle of Beijing’s Boulevard of Eternal Peace and stood in front of the first in a long line of tanks.

When the lead tank tried to go around him, he shifted to block it, a few times. When the tank rolled right at him, coming within arm’s reach, he didn’t flinch. Finally, the tanks turned off their engines and waited.

As photojournalists in the nearby Beijing Hotel snapped away at the scene, the Tank Man was immortalized.

The photo of him confronting the tanks was splashed across the world’s front pages the next day, and the image was quickly dubbed iconic.

Often described as one of the most powerful pictures of the 20th century, it, like all symbols, derives much of its power from what viewers want to find in it.

Two nights before, tanks just like the ones this young man confronted had rolled over screaming students on Tiananmen Square and its surrounding boulevards. The world had just witnessed an authoritarian state smashing peaceful individuals who had dared to ask it to change.

By any rational calculation, the Tank Man’s actions seemed absurd—what could he possibly hope to achieve? Nonetheless, in the wake of a most awful violation of the individual by the state, the image of the Tank Man vindicated the individual.

The photo answered a need felt urgently after the massacre, the need to believe that what each of us thinks and feels and does matters. When the tanks stopped, the dignity of humankind seemed to be restored.

Related discussion: Would you pass up millions of dollars in support of human rights?

Yet, the individual who inspired these feelings is himself anonymous. Who he was and what has become of him has remained in dispute ever since that day on the Boulevard of Eternal Peace.

He is now regularly referred to as Wang Weilin, but no one knows for sure if that is his name.

As for what happened to him, our last glance of him is offered by a video that shows him being hustled off the stage and out of sight.

In the video, as Wang Weilin stands opposite the lead tank, a man on a bicycle rides up. He speaks a few words to Wang and gives a signal with his hand.

Two individuals come running. They are seen grabbing Wang’s arms and one touches his back. The man who had stood resolutely motionless before the tanks is last seen running hastily off the boulevard, pushed from behind by his new companions.

Wu believes, and an expert on body language consulted by him agrees, that they are using martial arts techniques, holding Wang’s arms in such a way and applying pressure to acupuncture points so that he can’t resist.

There has been much speculation about what happened to Wang after that day, with some believing, who knows on what evidence, that he escaped to Hong Kong or Taiwan.

In a previous interview with The Epoch Times, Wei explained that the commander of the tank column Wang had stopped was Wei’s former classmate.

That former classmate commanded the lead tank and had summoned the security personnel, out of fear harm would come to the young man. Wang was taken by them from the boulevard to the grounds of the military museum nearby.

But there, officers lost track of him. He ran out in front of another column of tanks from a different unit, but these tanks didn’t stop. According to Wei Jingsheng, Wang was ground up like a meat pie.

This ending doesn’t sit well with the feelings we want to have when looking at the Tank Man in that iconic photo.

But the spirit of the Tank Man’s mute protest is alive in today’s China.

Upon receiving an award at Oxford on May 21, the blind activist Chen Guangcheng said, “In the last few years, Chinese people have had a rapid awakening that they are citizens, and this sense is getting stronger and stronger.”

Chen, who escaped one year ago after suffering one and one-half years of abusive house arrest, might be the first example offered to show that exercising citizenship in today’s China exacts a terrible cost.

Yet, more and more Chinese are insisting on doing so, heedless of the consequences the totalitarian state might visit on them.

For instance, on May 13 a group of human rights lawyers traveled to Sichuan Province in southeastern China to investigate a notorious brainwashing center. Guards set upon and beat them, and then turned them over to police, who beat them again. Most recently, the state refused to renew their legal licenses.

According to a dissident website, 10,000 petitioners streamed into Beijing on May 31. Eyewitnesses claimed that 1,000 of them were packed into buses and taken off to black jails notorious for the abuse they dish out.

According to a May 26 report on the Falun Gong website Minghui, 1,371 villagers in Hebei Province signed a petition demanding the release of a Falun Gong practitioner, even though they know that the Communist Party may punish them for opposing the injustices done to him.

Fueling the Tank Man’s courage was no small amount of disgust. The previous day and two nights he had likely seen things no one should ever see. Choking with anger, sadness, and revulsion, he would have felt he had no choice but to say, “This has to stop.”

So, too, the Chinese people. Their gorge is rising with disgust at the communist state until they feel have no choice but to say, “This has to stop.”

Through hard trials and great risks, a people is reclaiming itself, insisting that no matter the consequences they will not be silent. The Tank Man, surely departed, has found his heirs.