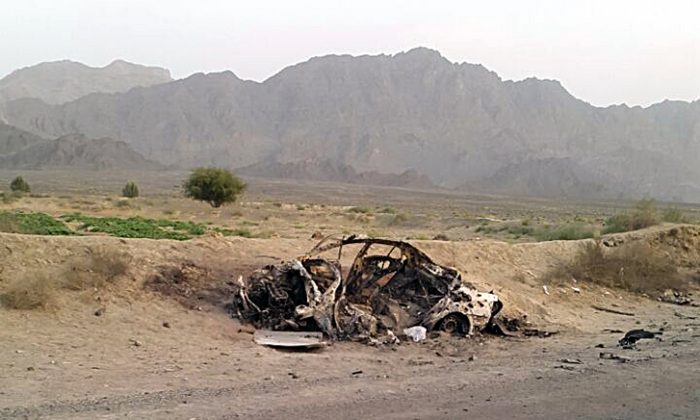 The scene of the U.S. drone strike said to have killed the Taliban leader Mullah Akhtar Mohammad Mansoor on May 22, 2016, while he was traveling in the Ahmad Wal area in Baluchistan Province, Pakistan, near Afghanistan's border. (AP Photo/Abdul Salam Khan)
Opinion

The May 21 drone strike that killed Taliban leader Akhtar Mohammad Mansoor was no ordinary assassination; it was an act of armed politics against an acutely political war strategist. The Taliban has already named Mansoor’s successor, Mawlawi Haibatullah Akhundzada, and is reassuring its members that the status quo will endure—but Mansoor kept a steady hand on the tiller and, now he’s gone, the movement could struggle to hold the line.

Mansoor set the tone for a particular approach to the Afghan and Pakistani governments, one that endures today. For over a year, the United States has backed the efforts of Afghanistan’s President Ashraf Ghani to persuade the Pakistani government to bring the Taliban to the negotiating table. Mansoor was the architect of the Taliban’s response to these overtures, which ranged from obfuscation to downright rejection.

Much of this was directed against U.S.-backed Pakistani officials, whom Mansoor treated to a string of excuses, delays, and platitudes. These ultimately boiled down to the message that he was not ready to negotiate.

By the time the Taliban announced its 2016 spring offensive, pretty much all analysts had concluded that Mansoor had simply been playing for time, banking on being able to make military progress in Afghanistan without negotiations, while trying not to provoke Pakistan into denying the Taliban access to their undeclared safe haven there.

During the stand-off, as Taliban representatives repeatedly explained their unavailability for talks, they consistently invoked Mansoor’s authority. On the big issues of war and peace, he was the only empowered figure in the movement. And yet, after an initial period when he made himself visible in meetings, Mansoor spent most of his leadership out of sight, and therefore unable to participate in any meaningful debate in the movement.

One of the main reasons for this was his brinkmanship with Pakistan and the United States. He may not have expected to be killed by a U.S. drone strike well inside Pakistan, but he certainly worried about a clampdown by the Pakistani authorities and wanted to stay ahead of them.

This was not the approach of a garden-variety guerrilla fighter. To appreciate just how much of a political and military strategist Mansoor was, you have to examine his record of dealing with internal dissent.

In retrospect, Mansoor was remarkably successful. While the Taliban did formally splinter for the first time under his stewardship—when the Mohammad Rasool group was formed—Mansoor relentlessly pressured this faction and rounded up its dissidents. In the period when he was still attending meetings, he tried to sweet talk estranged members of the movement into taking an oath of allegiance; after that, he depended on his aides to woo pretty much any senior veteran of the movement who had not accepted his leadership.

But where sweet talking did not work, Mansoor readily deployed Taliban columns against recalcitrant commanders. He had Commander Mansoor Dadaullah killed, and effectively wiped out a small faction of Uzbek extremists whom Dadaullah had sheltered.

For months, pro-Mansoor commanders have been involved in armed clashes in Afghanistan’s Herat and Farah provinces with fighters from Rasool‘s splinter group. Mansoor successfully projected the message that any rebellion against him, the Taliban’s lawful emir, would be dealt with sternly.

Over the past year, there has been a big gap between the internal politics of Mansoor’s Taliban and the peace agenda which the Kabul government and its allies have tried to advance. The Taliban’s politics revolved around Mansoor’s attempts to consolidate his hold over the movement—and he used his authority to keep the Taliban focused on the war effort. The movement never had a meaningful internal debate about the possibility of peace.

And so the Taliban enters a new era. It considers its Islamic emirate to be a system of government and, even before the leadership publicly acknowledged Mansoor’s death, the message to cadres was that there will be continuity: the system will survive, so carry on doing whatever you are doing. The incoming leader, Akhundzada, will be expected to sustain the structures, political practices, and dogma that Mansoor helped to build up.

Initially at least, this means maintaining the Taliban’s committed jihadist image, raising whatever funds possible, keeping up the military campaign in Afghanistan, and rewarding loyal and obedient supporters with positions in the hierarchy. The movement will keep looking for any state or non-state actor prepared to back it.

But it remains to be seen if the movement will or even can stay the same. While Mansoor successfully steered Taliban politics towards consolidation of his authority, 2015–2016 was still the movement’s most intensely political year yet, and the succession and its aftermath will trigger another round of internal politicking of the sort Mansoor had just about kept in check.

Whatever Taliban doctrine says about the continuity of authority, Afghan politics involves intricate maneuvers between competing networks, each seeking to take advantage of the elevation of a kinsman or fellow tribe member. Replacing the leader will force the movement’s informal networks into some sort of realignment. But things are going to get shaken up, and somewhere along the way the movement’s members are going to question the absence of debate—and maybe even the long war strategy itself.

Mansoor’s real problem was that he believed in the military campaign but lacked the means to win it. He did not live to see the failure of his strategy, and others are bound to start questioning it. And so begins the next chapter of the Taliban’s armed politics.

Michael Semple is a visiting research professor at the Institute for the Study of Conflict Transformation and Social Justice at Queen’s University Belfast in the U.K. This article was originally published on The Conversation.