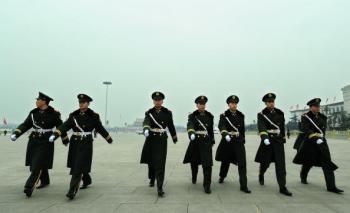 The T-Shirt That Scared a State

Suman Srinivasan
biggersmaller
Print
On a recent trip to China, I had a taste of what life in a police state is like. It is not something I will remember with pleasure.

I am a final-year doctoral degree student studying computer science at Columbia University. I am also an Indian citizen and have been residing in the United States for 10 years.

I have presented research papers at conferences in North America, Asia, and Europe, publishing 10 papers. But when I attended a conference in Beijing recently, I was detained and interrogated—simply because I practice Falun Gong, a traditional Chinese meditation and spiritual discipline.

I have been practicing Falun Gong for nine years now and have greatly benefitted from it physically and mentally. In just two weeks after I started practicing, the headaches and stomach diseases that I had suffered from were cured and completely disappeared. I have been able to focus on my work, studies, and research much more effectively.

My paper was accepted by IEEE, the world’s largest organization for engineers, for a conference to be held in Beijing, China June 25–27. I was very excited. I had never been in China before and very much looked forward to being in Beijing and taking part in the conference.

I enjoyed going to the conference and presenting my paper as I had with previous conferences around the world. I met and discussed interesting research work in the area of wireless networks with researchers from around the world and in China.

But on Monday, June 28, the day after the conference and my last day in the city, I walked around Beijing, hoping to see some tourist spots that I had missed. I was completely surprised when two police officers stopped and searched me in the middle of the street.

They found in my bag a yellow T-shirt that had on it the words “Falun Gong” and “Truthfulness-Compassion-Tolerance” in Chinese and English. Truthfulness, compassion, and tolerance are the principles that guide the practice of Falun Gong.

I do not believe I was searched at random—I did not see any other foreigners being searched on the street by police during my time in Beijing. Falun Gong practitioners outside China are regularly monitored by Chinese consular officials and agents.

Once they found my T-shirt, one of them held on to me as a police van came up and took me to the Tiananmen Square police station. There I was thrust into a room with five or six police officers, one of whom interrogated me in English.

The police officer asked me questions such as why I had started practicing Falun Gong, where I got my Falun Gong materials, and whether I read the Falun Dafa Clearwisdom website frequently. They went through my invitation letter for the conference in great detail and asked me about how I had applied for the conference, and so on.

Also, I told them that I had kept my Falun Gong T-shirt in my close possession, and it was not visible to the public. The policemen who had searched me had to pull out the T-shirt and open it up to see that it related to Falun Gong.

In addition, the interrogator told me, “Do you know … what you did could be constituted a threat to the Chinese government!”

How silly! My having a Falun Gong T-shirt constituted a threat to the Chinese state? Was the Chinese regime scared of international researchers bringing with them a T-shirt with the words “Truthfulness-Compassion-Tolerance” written on it? Did the regime believe my T-shirt was a threat to its existence?

Finally, they told me that they would issue a new visa shortening my stay. I protested, saying it was ridiculous since I was leaving that day to return to the United States, but they said they had to do it since it was the law.

They promised they would do so, but when they finished the interview, they said that there had been no arrest, so there were no legal papers, and so they had not contacted the Indian Embassy.

Of course, the treatment I received at the hands of the Chinese police, although outrageous, was very mild compared to the treatment that would be dished out to a Chinese citizen caught carrying a Falun Gong T-shirt.

The Falun Dafa Information Center last week reported that in late August a 57-year-old appliance salesman named Mr. Zeng Huaguo was beaten to death within six days of his being detained. His “crime” was that he practiced Falun Gong.

If I accepted the mistreatment I received at the hands of the Chinese police, I would in a way be accepting how the Chinese regime beat and killed Mr. Zeng and how it has jailed, tortured, and killed so many Chinese citizens who, just like me, practice Falun Gong.

If the Chinese regime is scared of my belief, let it continue to be scared. That won't stop me from attending conferences in China.

Suman Srinivasan is back in New York City continuing his research on wireless technology.