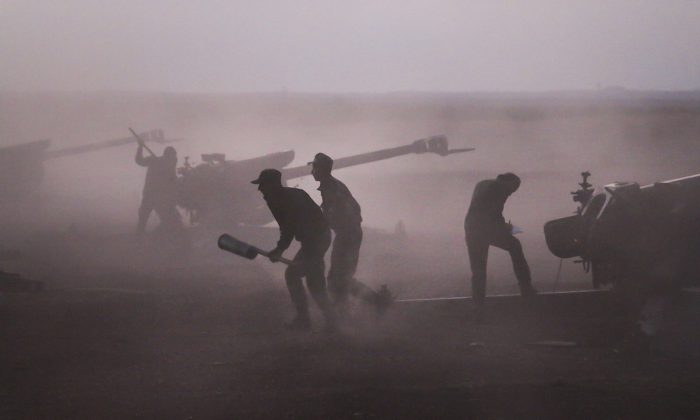 Often described as a “complex web,” the Syrian war involves numerous actors, dozens of seemingly contradictory alliances, and rapidly changing dynamics. But while the war is indeed complicated, making sense of it is crucial to understanding the recent Paris attacks, the refugee crisis in Europe, and the continuing turmoil in the region. Here are the basics—decoded.

The Syrian “war” began in March 2011, during the Arab Spring, when Syrian president Bashar al-Assad’s government forces launched a violent crackdown against protesters in the city of Daraa. Protests escalated and the regime responds with mass arrests, torture, and killings.

In July 2011, the Free Syrian Army (FSA) emerged as the first major rebel group to battle the regime. Comprised largely of defectors from the Syrian armed forces, the FSA’s early successes in seizing military bases and equipment quickly escalated the conflict. By early 2012, it was a full-blown civil war.

Early 2012 also saw the formation of a very different rebel group, Jabhat al-Nusra (the Nusra Front), an offshoot of the notoriously sectarian group al-Qaeda in Iraq (AQI). Though not the only new group to emerge at this time (the U.S. Defense Intelligence Agency estimates that more than 1,000 rebel groups were operating in Syria by 2013), the Sunni Jabhat al-Nusra quickly changed the dynamic, unleashing suicide bombings and turning the conflict increasingly sectarian.

The Syrian war did not begin as a sectarian conflict, but it quickly became one, especially with the encroachment of regional actors. By mid-2012, the weakening Assad regime was buoyed by direct assistance from longtime (Shia) ally Iran, and then by fighters from Iran-backed Hezbollah in neighboring Lebanon.

Meanwhile, seeking the upper hand in their regional cold war with Iran, Sunni Gulf States, such as Qatar and later Saudi Arabia, began supporting Sunni Islamist rebel groups, including Jabhat al-Nusra, with a steady flow of arms and cash.

Meanwhile, the Kurdish minority in northeast Syria, which had so far avoided involvement, declared its own autonomous region in Rojava, in opposition to both Assad and the other rebel groups.

From Bad to Worse

Exploiting fractures and rivalries among rebel forces, Assad pummeled opposition, militants, and civilians alike—and in August 2013 launched a sarin chemical weapons attack on the Ghouta agricultural belt around Damascus. Around 1,400 people were killed. President Barack Obama previously had identified chemical weapons as a “red line,” but potential airstrikes were averted by a deal between the United States and Russia in which the United States agreed to back off if the Syrian regime, supported by Russia, destroyed its chemical weapons program.

Indeed, when U.S. airstrikes in Syria did begin the following year, they didn’t target the Syrian regime, but a newly emerged rebel group: the Islamic State in Iraq and Syria (ISIS). Later referred to as Islamic State, and often described by its Arabic acronym, Daesh, it also emerged from AQI, but sought to be independent from al-Qaeda, aiming to establish a caliphate in Syria and Iraq.

Rebuffed by Jabhat al-Nusra leaders and exiled from al-Qaeda in February 2014, ISIS employed brutal tactics and ideologies to—in the apt words of Zach Beauchamp—”out-extremist al-Qaeda in competition for recruits and resources.”

ISIS is winning the extremist PR war and recruits both regionally and internationally, attracting an estimated 30,000 foreign fighters to its ranks by September 2015.

The United States, which provides support for some anti-Assad rebels, began airstrikes against ISIS in September 2014. The following year, Russian airstrikes started in support of Assad and were criticized for targeting moderate rebel groups instead of ISIS.

As Assad hung on, ISIS gained territory in both Syria and Iraq and grew in reach, in recent weeks claiming responsibility for international attacks against a Russian airliner over Egypt’s Sinai peninsula, a twin suicide bomb attack in Beirut, and the Paris attacks.

‘Running Out of Words’

The Syrian conflict has been described as a civil war, a proxy war, and a sectarian war. On one level, the Syrian government, backed by Russia, Iran, and Hezbollah, is pitted against the “moderate” rebels, backed by the U.S.-led coalition, Turkey, and the Gulf States, with everyone scrambling to contain ISIS (which also receives funding from the Gulf States). The Kurds are fighting ISIS and Assad, and are supported by the West, but are also being bombed by Turkey, which is trying to stem a Kurdish uprising within its own borders. Following the latest atrocities—and France’s growing engagement—things could get even more complex.

However you frame it, the war is a humanitarian crisis: more than 220,000 killed, 4.2 million refugees, and millions more internally displaced. U.N. officials briefing the Security Council have said they are “running out of words” to describe the horror.

The United States and more than a dozen other states, including Saudi Arabia and Iran, have reportedly agreed to a framework that will include a ceasefire and political transition. But steps toward implementation will be slow and difficult.

Julie M. Norman is a research fellow in conflict transformation and social justice a the Queen’s University Belfast in the U.K. This article was previously published on TheConversation.com