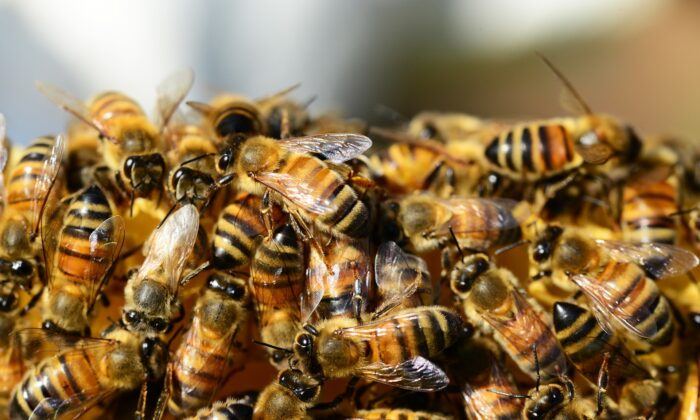 Ticked off bees are a fact, malign Hitchcockian birds a fiction, but both demonstrate aerial swarm attacks can be ferocious and effective.

Which is why at least two dozen defense ministries on Earth are spending billions on defending against enemy swarm attacks and on conducting their own swarm offensive strikes.

Another question: Can these attacks be conducted with minimal or no human guidance after the swarm is ordered to attack?

The begged question but a relevant one for a follow-up column: Is a robotic attack without a human commander in the loop throughout the entire attack ethical?

In November DARPA completed another field experiment in what it calls its OFFensive Swarm-Enabled Tactics (OFFSET) program. The test was conducted in Fort Campbell, Tennessee. Aerial and ground (wheeled, tracked) autonomous robots participated.

The exercise took place in a complex “urban environment” (Pentagonese for city). According to DARPA, the test examined “advancements in collaborative swarm autonomy and human-swarm teaming capabilities” with the goal of developing tactics that can be translated into software code robots can follow.

Swarm tactics are as old as warfare. Swarms of long-range arrows fired by Welsh and English archers broke up large formations of enemy knights. Today in the Persian Gulf, Iranian speedboats swarm attack tankers. However, Revolutionary Guards run the boats, not computers.

AI and robots add another dimension—and that dimension is no longer theoretical.

Several defense-related websites concluded Israel’s May drone foray into Gaza represented the first “true swarm” attack in history. In an article published July 7 in Defense One, researcher Zachary Kallenborn called the attack “a new benchmark in drone technology.” The drones had a reconnaissance mission. They located targets and relayed information to Israeli mortar and missile units. However, Kallenborn concluded the drones were conducting “coordinated searches,” suggesting they were communicating, collaborating and “making collective decisions.” He added: “In a militarized drone swarm, instead of 10 or 100 distinct drones, the swarm forms a single, integrated weapon system guided by some form of artificial intelligence.”

A biological comparison: like a multicellular biological system with a brain, the robot components work together to achieve higher-level goals. A drone identifies a target that fits a pattern the drone’s AI recognizes. The drone that records the pattern then notifies the entire swarm. The notification triggers a behavior—a mass attack. In effect, the AI mimics a human brain’s neural circuits

Programmed, nonconnected “self-guided drone” attacks are similar to cruise missile attacks and several have been quite successful. In September 2019, 25 Iranian drones attacked the Saudi Arabian Abqaiq oil facility and Khurais oil field. The damage temporarily took over seven million barrels a day of oil off the world market.

The U.S. Army and Navy know enemy robot swarms are a threat. They are developing high-powered “microwave cannons” that can burn drone “brains” and protect armored units and Navy ships from swarm attack.