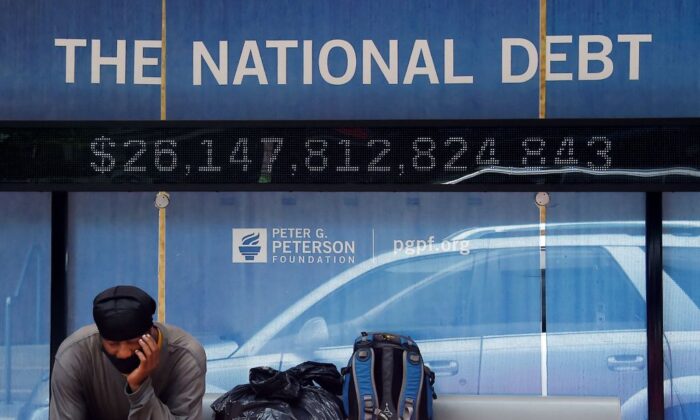 A man waits at a bus stop that displays the national debt of the United States in Washington, on June 19, 2020. (Olivier Douliery/AFP via Getty Images)
Viewpoints

The Surreal Nightmare of Federal Finance

The federal budget has degenerated into a farcical charade. Today, the federal government’s explicit debt is careening toward the unfathomable sum of $29 trillion. (Let’s set aside for now the much larger number that comprises Uncle Sam’s unfunded liabilities).

The sums involved are mindboggling.

Many members of Congress have no grasp of economic reality. Like the fictitious mediocrities who devised public policy in Ayn Rand’s “Atlas Shrugged,” their real-life counterparts in Washington today show no comprehension of a crucial economic fact of life: Our country’s wealth—as great as it is—isn’t unlimited. Like the environmentalists I criticized in my previous piece, the inescapable reality that economists refer to as “cost” is nothing but a bothersome abstraction to them—an inconsequential conservative superstition to be ignored.

Last month, the procedural step of Congress officially raising the debt ceiling returned after a two-year hiatus. (The hiatus was a key feature of a deal in late 2019 between former President Donald Trump and House Speaker Nancy Pelosi.) A short-term fix has postponed the debt ceiling drama for two or three months, but it will be back before you know it. The outcome is predetermined: After much hemming, hawing, and partisan wrangling, the debt ceiling will be raised. I wrote about the “Debt Ceiling Dance” over a decade ago, concluding my commentary by writing, “Have you ever wondered why we are debating raising the debt ceiling above $14.3 trillion [now $28.9 trillion]? Answer: because earlier Congresses didn’t rein in spending and curb the debt at $10 trillion, $5 trillion, $1 trillion, or less.” Nothing has changed. Our country is addicted to Big Government and debt as a way of life, and federal debt today is more than twice what it was only 11 years ago.

This is economic folly in the extreme, but what’s especially galling is the frivolity, the utter lack of seriousness, the devil-may-care attitude of our elected officials. Indeed, one is tempted to say, “Where are the adults?”

Consider these examples of fiscal silliness:

Rep. Jerry Nadler (D-N.Y.) suggested getting around the debt ceiling law by minting a trillion-dollar coin. While that would provide rich material for comedians (Hey, Joe, do you have change for a trillion?), Nadler’s proposal is starkly revealing of what a joke today’s fiat money has become. Strike a coin, wave a magic wand, and—presto!—the government has another trillion dollars to spend. Surreal and spooky, isn’t it? (Happy Halloween, everyone.) Actually, the trillion-dollar coin contrivance isn’t essentially different from how the Fed routinely conjures money out of nothing in the form of digital bytes and bank entries.

Rep. John Yarmuth (D-Ky.), the House Budget Committee chairman, indicated that he wishes there was no such obstacle to spending as a statutory debt ceiling. In his words, “I want to raise it [the debt ceiling] to a gazillion dollars and just be done with it.” Removing all limits to federal spending takes us to the realm of fantasyland, but perhaps we should commend Yarmuth for his candor.

Then there’s the fellow in the White House—a president who proposes an avalanche of additional spending that would plunge us trillions of dollars more into debt. He has been justly excoriated many times for the fiasco of the botched withdrawal from Afghanistan, but beyond the lives ruined and betrayed, beyond the incalculable loss of American honor and credibility, look at the economic cost of the withdrawal: The United States abandoned about $10 billion of armaments for the Taliban to use and sell. Did it not occur to the president that at a time he wants to increase spending by trillions, it makes no sense to give away $10 billion worth of military hardware?

The president’s astonishingly cavalier attitude seems to be that money grows on trees, so what’s a measly $10 billion?

Joe Biden also has virtually thrown away $100 million dollars already appropriated by Congress for the building of the wall on our southern border. According to reports, Biden is paying contractors what they had been promised for building the wall, but he’s not letting them actually build it. Instead, vast quantities of fabricated steel ramparts that are already on site have been abandoned and left to rust. To spend that much money and then essentially throw it away is worse than typical government waste; it’s premeditated economic sabotage.

I suppose by today’s surreal standards, $100 million is a rounding error in Washington, but, once again, Biden’s casual willingness to throw away valuable things that beleaguered U.S. taxpayers have paid for shows contempt and disrespect for us taxpayers. A president who wants to raise taxes sharply has a moral responsibility to taxpayers to be a prudent, respectful steward of the funds thus appropriated.

The president’s fiscally irresponsible and wasteful actions demonstrate mismanagement and incompetence, but there’s something even more disturbing in play here. Giving armaments to an enemy and blocking the construction of a wall already paid for while the border is being overrun are perverse and destructive policies. Economically, they reek of irrationality.

Any other entity, individual or corporate, that would practice such gross mismanagement would soon grind to a halt through bankruptcy. Government, though, doesn’t play by the same rules as the rest of us. It can plunge ever deeper into debt, squandering more and more resources. Can it do so ad infinitum? Sorry: There’s nothing infinite in our finite world.

Someday the federal debt bubble will pop and we’ll get walloped with a whale of a depression. Until then, the surreal fiscal nightmare centered in Washington continues.