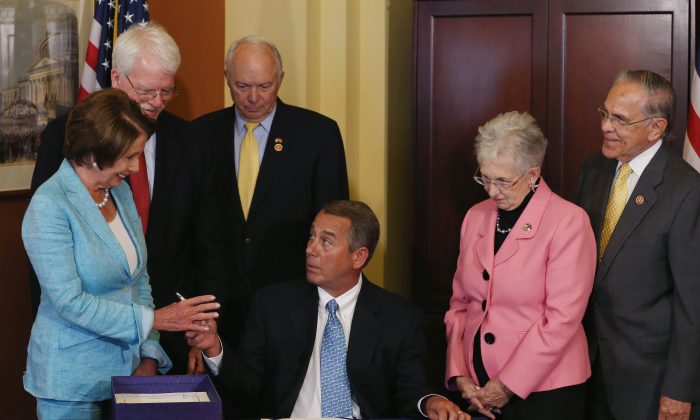 The Summer of Our Discontent

Despite these last few months of hot and lazy days, it’s been hard not to notice a cold political wind blowing through the country. The magazine Foreign Affairs captured it with its latest cover, a mockup of a travel poster featuring a crumbling U.S. Capitol with the tagline, “See America: Land of Decay and Dysfunction.”

Americans are clearly uneasy. I know it anecdotally, because at virtually every public gathering I’ve addressed over the last few months someone has spoken up with his or her worry that our nation is in decline.

And the polls bear it out. In June, a Washington Post article, “Is the American Dream Dead?” noted a string of polls showing majorities of Americans believe their children will be worse off than they were.

By early August, an NBC–Wall St. Journal poll was reporting that a full three-quarters of those surveyed lacked confidence that the next generation would be better off—the most pessimistic results in the history of the poll. Regardless of income, ethnicity, religion, or gender, Americans don’t think much of our future.

This is a ground-shaking turnabout. Since well before I began my political career in the early 1960s, the keystone of our politics was an unflagging optimism that as Americans we could face head-on the task of improving our own and others’ lives and deliver on our responsibility to future generations.

As Chris Cilizza wrote recently in The Washington Post, “So much of every politician’s patter—Democrat or Republican—is built on the idea that America has always overcome hard challenges, always made things better for our kids than for us, always had achieving the American dream as a real possibility.” Now, he notes, “A large bloc of the electorate no longer believes any of that.”

Why not? Partly, it’s the economy: growth has been sluggish, we’re not generating enough good jobs, and the benefits of the recovery have flowed more to some than to the many. The growing awareness of a lopsided society—one in which a rising tide fails to lift all boats—has put many people in a surly mood. That problem of income inequality is joined to a host of others—from climate change to crumbling infrastructure to a world in which the forces of chaos and turmoil appear to be expanding.

Yet I think Foreign Affairs has nailed the biggest factor: the perceived dysfunction of our political system. As political scientist Francis Fukuyama writes in the lead essay, dealing with our problems “requires a healthy, well-functioning political system, which the United States does not currently have.”

Simply put, Americans have no confidence that our system can resolve the challenges before us. They don’t expect miracles, but they do expect political leaders to make progress, and they haven’t been seeing much.

I can understand why so many people would be pessimistic, yet I don’t find myself sharing their fatalism. That’s because political moments are just that: moments. Over the long reach of our history, we’ve learned time and again that when our political leaders do focus on our challenges, speak to one another directly, and are determined to find a solution to our problems, they can overcome their differences and make progress.

Our Constitution has been in effect for 225 years. The system it created, with its checks and balances, and its carefully constructed equilibrium between constraining and enabling government, has seen us through no small share of bruising times. It has protected our freedom, given hundreds of millions of Americans by birth and Americans by choice an opportunity to pursue the lives they wanted, and allowed us to speak freely, associate with the people we choose, and openly follow the religious and spiritual lives we want.

There is no shortage of challenges facing the system—from the influence of money on elections to the encrusted rules that hamstring capable public officials to the scorched-earth political culture that reigns in Washington these days. But I am convinced that they are no match for an aroused and determined public that recognizes we are all in this together, that we can adapt to changing circumstances, and that we should not give up on the system.