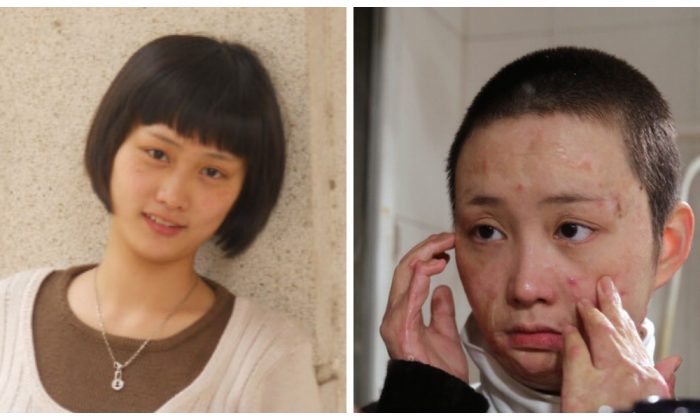 Zhou Yan before and after her attack. (Sina Weibo)
China

The Struggles of a Chinese Woman Disfigured by a Vengeful Admirer

Five years ago, the pretty and refined face of a 16-year-old girl in eastern China became a thing of the past when a classmate she turned down doused her in lighter fluid and set her on fire.

Zhou Yan suffered burns covering a third of her body, including her neck and face, and lost an ear in the attack, the state-run Beijing News reported.

Now 21, she faces the physical and physiological agony of her unhealed wounds alone.

Initially, Zhou received a tremendous outpour of public sympathy. Her family received donations, and court ordered that the assailant’s family pay her compensation. Later in 2011, a hospital promised in a televised broadcast to provide her with treatment at no cost.

But now, Zhou has been all but forgotten by the public and her surgery is incomplete for want of money. Her continuing health symptoms cause her to secrete pus and she faces an increased risk of skin cancer.

The family of Tao Rukun, the male student whose infatuation took a criminal turn, was to compensate Zhou for the extensive reconstructive surgery she needs to heal her burns, but his parents—who are government officials—have challenged the court in multiple appeals.

The Taos claim the 1.3 million yuan (about $264,000) they are expected to pay is “unreasonable” and that Zhou had actually been in a romantic relationship with their son. They say that Rukun burned her in a crime of passion because she was seeing other boys.


Zhou’s partially-treated skin is marred by branch-like scarring after numerous skin grafting operations. “Two of my scars often get inflamed and leak pus,” she told Beijing News. “Professionals say I might get skin cancer if I go for long without treatment.”

Despite the hospital’s earlier statements, Zhou’s last treatment was in 2014. Staff give her deflective answers when asked about the matter.

“When the incident happened, I was the center of media attention, so everybody cared about me,” Zhou said. “After the wave of outrage passed, reality kicked in and life went on as usual.”

She lives with her mother in a ward provided by the hospital, and making a living by selling makeup on WeChat, a popular Chinese social media platform. Little remains of the donation money they received from the public.

Even if Zhou received the 1.3 million yuan the court demanded of the Tao family, she says that even that amount would be insufficient to cover full medical costs.

Tao Rukun is still being held in juvenile detention, despite now being an adult.

‘I Feel Like a Monster Stuck in the Human World’

Dealing with her condition has been physically and emotionally taxing for Zhou. She has to apply ointment solutions daily, and suffers terribly in hot weather since she cannot sweat from her scarred skin.


In the beginning, she was so ashamed of her appearance that she found it most convenient to go out at night via the hospital’s emergency staircase lest she frighten others.

Later, she built up the courage to go outside unveiled in broad daylight, but even then she faces challenges.

While her case is relatively well-known and most sympathize with her, many insults and lewd comments surface online to mock her appearance and speculate about whether she may have deserved the “punishment.”

“I feel like a monster stuck in the human world,” Zhou told Beijing News.

In one casual incident that happened last year, a girl riding a bicycle ran into her. The flustered rider was about to apologize, Zhou recalls, but her expression soured when she showed her face.

The girl, Zhou said, “gave me a look of disgust, cursed, and went on her way.”