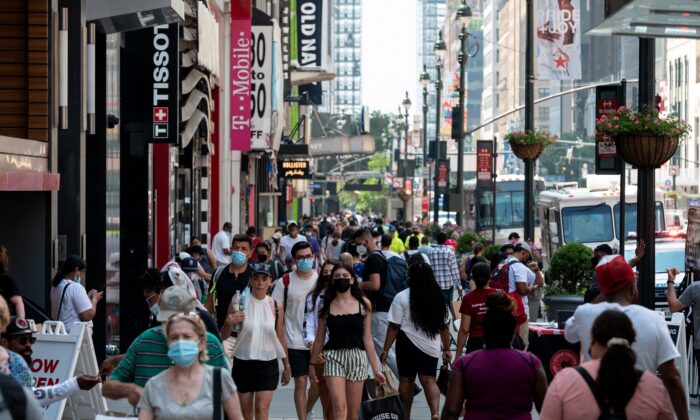 People walk through a shopping area in Manhattan in New York City on Jun. 7, 2021. (Angela Weiss/Getty Images)
Thinking About China

In China and the US, masculinity and femininity are under the lens

What is a man? This is a question that has occupied the minds of philosophers for centuries. When asked for a definition, Socrates referred to man as a “featherless biped.”

That definition may have pleased his followers, but it’s not a definition that pleases the Chinese Communist Party (CCP).

For Xi Jinping and his colleagues, the answer to the “what is a man” question is more straightforward: a man is not a woman. A man does not dress like a woman, and a man does not act in the same manner as a woman. China’s Education Ministry has already promised to “cultivate masculinity” throughout the country. In a desperate attempt to prevent the “feminization” of Chinese boys, the CCP has drawn a hard line between what it means to be a man and what it means to be a woman.

Meanwhile, in the United States, people are asking, what is a woman?

Judge Ketanji Brown Jackson, a current nominee for the Supreme Court, recently answered the question without actually answering the question. Jackson is an attorney, you see, not a biologist. Must one really be a biologist to answer the “woman question”? Of course not. Must one be a pastry chef to identify a croissant?

Nevertheless, Biology Online, one of the world’s most comprehensive databases of biology terms, defines a woman as “an individual of the sex which conceives and brings forth young, or (in a wider sense) which has an ovary and produces ova. The male and female of each living thing.”

Donna M. Hughes, Ph.D., an academic and conventional feminist who chairs the women’s studies department at the University of Rhode Island, told me that the “biological definition of a ‘woman’ is an adult human female. It is the term for the sex of an adult person.”

Professor Hughes added that the “social meaning of a ‘woman’ can be wider, more culturally and socially constructed, and acted out. A man may present himself as a ‘woman’ and act out his imitation of a woman, but he can never ‘be’ a woman.”

She then offered an analogy of “a white person who paints their face black and mimics ‘being black.'” They are said to be in “black face.” Think Justin Trudeau partying with his friends.

Hughes continued, a “man who dresses like a woman and even gets surgery to appear more like a woman, is a man in ‘woman face.’ Awkward sounding, but the analogy is sound.” Like “black face,” she said, “it is an insult to the one who is being mimicked.”

Indeed. Carole Hooven Kennedy, a human evolutionary biologist at Harvard, told me that she “can’t see an alternative definition to ‘adult human female’” (the biological and actual definition).

This brings us back to Jackson’s answer (or nonanswer). Whether you agree with her politics or not, she’s clearly an intelligent person. Jackson also happens to be a woman, and she also happens to have a daughter. It’s not that she doesn’t know what a woman is. She clearly does.

It’s more likely that Jackson was afraid to define the term “woman.” If she answered with a biological definition, the left would have lost its mind. On the other hand, if she had conflated sex with gender and started discussing social constructs, many on the right would have lost their minds.

This does not excuse Jackson’s “I’m not a biologist” response, but it does shine a light on the lunacy that has gripped the United States. Tens of millions of Americans are afraid to speak the truth. And we all know why.

To say the unsayable, even if it happens to be completely accurate, is unforgivable. No doubt, this was weighing heavily on Judge Jackson’s mind when the dreaded “woman” question was asked.

In a recent paper, Dr. Alex Byrne, a philosopher who happens to be married to the abovementioned Hooven Kennedy, asked if women are, in fact, adult human females. “Dictionaries suggest that they are,” he wrote.

“However, philosophers who have explicitly considered the question invariably answer no.” Byrne’s paper “argues that they are wrong.”

Even philosophers are getting on board with concrete definitions. Perhaps Alexandria Ocasio-Cortez should read Byrne’s paper—the politician and activist now refers to mothers as “birthing parents.”

Matt Walsh, an American conservative political commentator, just released a book titled “What is a Woman.” Right now, it happens to be one of the bestselling books on Amazon.

Walsh recently tweeted out: “My acclaimed women’s studies text ‘What Is A Woman’ is now number 12 overall on Amazon. Now imagine if someone had told you 15 years ago that in 2022 there would be a best selling book titled ‘What Is A Woman.'”