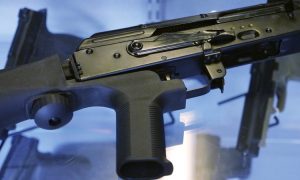 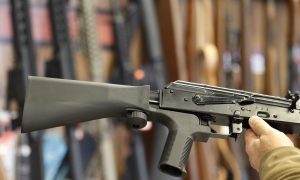 The Strange Politics of Bump Stocks, Democrats, and the NRA
0 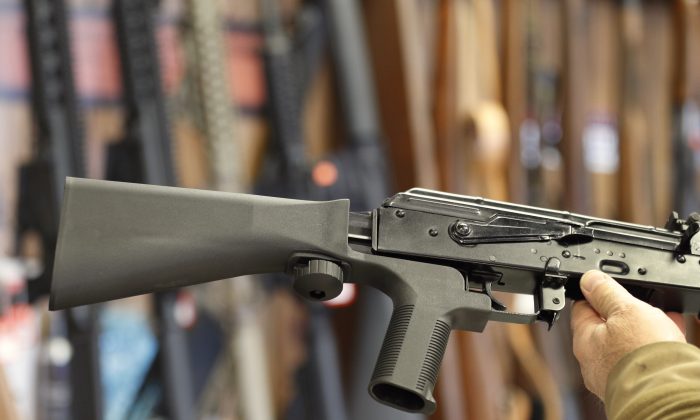 A bump stock device, (left) that fits on a semi-automatic rifle to increase the firing speed, making it similar to a fully automatic rifle, is installed on a AK-47 semi-automatic rifle, (right) at a gun store on Oct. 5, 2017, in Salt Lake City, Utah. The Trump administration has just announced a reversal to a rule that allowed the sale of bump stocks. (George Frey/Getty Images)
Viewpoints

The Strange Politics of Bump Stocks, Democrats, and the NRA

The Trump administration has taken an important action that just might make Americans a bit safer when it comes to mass shootings. A new rule issued on Dec. 18 will reverse a 2010 decision of the Bureau of Alcohol, Tobacco, Firearms, and Explosives (ATF) during the Obama administration that allowed the sale of bump stocks.

Bump stocks have nothing to do with the stock market, unless you own shares in one of the companies that have made millions through the sale of the controversial attachments. Bump stocks are attachments purchased by gun owners to turn their semi-automatic rifles into rapid-fire weapons akin to machine guns.

Trump’s new rule will give owners 90 days from the date of publication in the Federal Register to destroy or turn over their bump stocks to the ATF for destruction. Law-abiding Americans will do so. People with nefarious intent will hide and cling to their attachments. Gun-rights advocacy groups have already filed suit challenging the rule change. The measure is expected to be published on Dec. 21.

Here’s the lowdown on the devices. In 2010 and 2012, Obama-era ATF officials sent letters of approval to Slide Fire and Bump Fire with the explanation that the attachments were legal because the devices didn’t transform rifles into machine guns. Therefore, the attachments couldn’t be regulated unless Congress passed new gun-control legislation. Under the new rule, bump stocks and similar devices are now considered machine guns, even though the devices came decades after the passage of the National Firearms Act of 1934 and the Gun Control Act of 1968.

Many of us first heard about bump stocks after the October 2017 Las Vegas shooting that killed 58 people and wounded more than 800, in what remains the largest mass murder in U.S. history. Twelve of gunman Stephen Paddock’s 23 guns had been outfitted with bump stocks, transforming his rifles into rapid-firing devices.

Following the shooting, in what can best be described as an unexpected decision, the National Rifle Association (NRA) issued a statement in October 2017 requesting a review of the Obama administration’s policy on bump stocks:

“Despite the fact that the Obama administration approved the sale of bump fire stocks on at least two occasions, the National Rifle Association is calling on the Bureau of Alcohol, Tobacco, Firearms and Explosives (BATFE) to immediately review whether these devices comply with federal law. The NRA believes that devices designed to allow semi-automatic rifles to function like fully automatic rifles should be subject to additional regulations.”

In reaction to the president’s decision, the NRA has issued a statement expressing disappointment and a fear that the action without an amnesty would criminalize ordinary Americans who purchased the attachments when they were legal. So far, there has not been a rush of journalists to remind the public that bump stocks were legalized during the Obama administration. Instead, the president is being criticized for an inappropriate use of executive action.

Anyone who has watched Congress over the past few years knows that Republican lawmakers are reluctant to tackle gun-control legislation because of advocacy groups and their allegiance to the Second Amendment. Guns equipped with bump stocks can fire a thousand rounds in 15 minutes, as Paddock proved in Las Vegas. It’s doubtful, however, that many legislators of either party would support individual gun ownership of anything akin to a machine gun.

Gun-control legislation is near and dear to the hearts of Democrats, who regularly call for gun control whenever there is a mass shooting. The opportunistic calls take place even before the bodies are cold, and long before investigators have reached a conclusion about the motivations or mental health of the shooter.

Why would a Democrat administration approve the sale of a device that some say has no practical purpose other than to make it easier to engage in mass shootings? A gun outfitted with bump stocks is certainly not a device any reputable hunter would use. One of the manufacturers said the guns were intended for disabled people. But what disabled person would need a machine gun for personal protection? Bump stocks seem to have been made available for gun collectors and people who wanted to own a rapid-firing gun for whatever reason.

In the political arena, Democrats constantly accuse Republicans of being lackeys for the NRA. Yet, some of the most serious decisions facilitating mass shootings took place during the Obama years. Not only do we have the scandalous approval of the sale of bump stocks, but we also have the gun-running scandal known as “Operation Fast and Furious.”

Operation Fast and Furious occurred under the watch of Attorney General Eric Holder. It involved a sting operation ostensibly designed for the purposes of stemming the flow of U.S. guns into Mexico by allowing the purchase of illegal guns from gun shops and then tracking the movement of the guns and their use by the drug cartel. Along the way, U.S. officials lost control of the guns.

Some of the guns found their way back into the United States and one was used to kill Brian Terry, a Border Patrol agent. In a familiar pattern, no one in the Obama administration was held accountable. Holder refused to release documents requested by Congress and was held in contempt of Congress. Had this been the Trump administration, we can be sure that heads would have rolled and a few persons might have gone to jail. Instead, there were no major consequences to speak of.

Writing about Fast and Furious for the National Review, Ian Tuttle stated: “The operation may have had an explicitly political angle. Emails obtained by CBS News in late 2011 showed ATF officials corresponding about the possibility of using Fast and Furious to push through a regulation requiring gun shops to report the sale of multiple rifles or ‘long guns.’ In other words, the ATF permitted certain gun shops to conduct certain inadvisable sales to dangerous people and then planned to point to those sales to justify the need for new reporting requirements.”

Fast and Furious seems to have had a political motivation. Were politics behind the Obama administration’s approval of the bump stocks? In a world of “the ends justify the means,” it makes perfect sense for political strategists to sacrifice the lives of some people in order to get a desired outcome. In the case of the Democrats, the desired outcome is greater gun control through the passage of new legislation.

It isn’t difficult to imagine some social-justice warrior theorizing that if enough mass shootings take place, the American people will eventually respond much as they did after 9/11. That’s when fear of terrorism resulted in the quick passage of federal legislation that empowered the government to spy on ordinary citizens.

The ban on bump stocks is a step in the right direction, but it won’t end mass shootings or other forms of violence in America. It won’t end the violence because we live in a culture that disrespects the sanctity of human life at every stage of development. It is a culture where hatred is common, mental illness is rampant, and morality and individual responsibility take a backseat to politics.