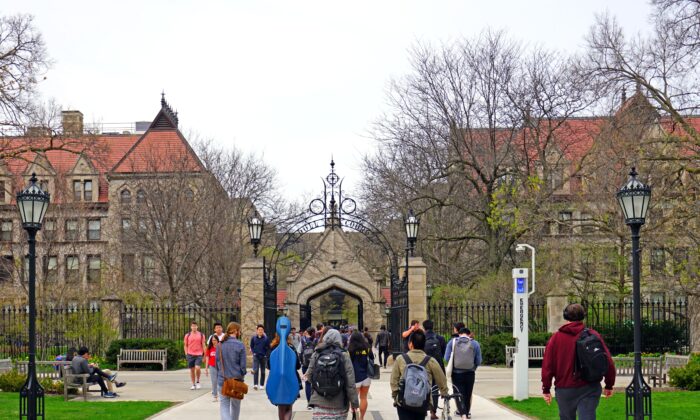 Students on the campus of the University of Chicago in Chicago, Ill., in a file photo. (EQRoy/Shutterstock)
Viewpoints

The Strange Obedience of the Professorate

In the past, if you wanted to find a place where radical thoughts were in the air, protest and dissent were in ferment, and innovative ideas traded back and forth, you couldn’t do better than the college campus in 1965, 1975—all the way to the 2010s.

The free speech and anti-War movements of the Sixties made their home there, and the LGBTQ crusade (though it began off-campus) was consolidated into Gender Theory and Queer Theory by academics who gave the activists an intellectual sheen they never would have developed on their own. Today’s Critical Race Theory, too, goes back to the law schools and “studies” programs, while the conversion of public schools into factories of progressivism is standard dogma in schools of education that certify teachers (Paolo Freire’s “Pedagogy of the Oppressed” is still one of the most often assigned texts in ed school courses). All of them challenged one orthodoxy or another, questioned tradition, upset convention, and aimed to make you think, and think again.

But that’s not the way it is anymore, that’s for sure. We now have a hegemony in higher education that’s more binding, more stifling and controlling and punitive than anything the faculty, administrators, and students ever exerted and imposed back in those oppressive, conformist years of the 1950s. The Woke outlook is absolute. Professors don’t dare cross it. Undergraduates who have other concerns keep their heads down when the protesters pass. Administrators react to the Woke demonstrations with the dispatch of an attendant at the court of Henri IV hearing the king’s latest request. Be quick, be wary, stay safe! That’s the policy, even for professors with tenure and long achievement. They have a paycheck for life as long as they don’t engage in serious misconduct, but they act as if they have no security, no protection should the mob arise. They see a colleague targeted and keep quiet. They don’t come to his defense and demand due process (for whatever crime he’s supposed to have committed). No, they only think, “Thank goodness it’s not me.”

It wasn’t always like this. Oh, academia has leaned left for many decades, but that very political bent encouraged academics to make room for the Hot Shot, the Young Turk, the troublemaker, the upstart assistant professor contending with senior colleagues and their old-fashioned ways. That was the liberal attitude of yore, tolerance of the dissenting voice, admiration of it by virtue of its bare dissent. In the humanities from the Sixties through the Nineties, change was the going atmosphere, everyone wondering what fresh theories and methods would come next, and what brash young characters would announce them. This was an academic version of adversary culture, where all the nobility fell upon the gadfly and the rebel. Hence, the idolatry of critical thinking in the disciplines, which is supposed to take nothing on faith, nothing for granted, to leave no dogma or convention untouched.

But you better not apply that analytic savvy to the idols of the Woke. Black Lives Matter, Donald Trump, Jan. 6, systemic racism, the glass ceiling, trans-rights, and a dozen other subjects are set in stone, the moral poles fixed and correct thinking about them laid out in advance. We have a Party Line firmly in place, and all the faculty members know it. They’re scared; the adversarial temper is gone. The courage of the independent thinker, the fearless critic taking on the Greats, the researchers and scholars who follow the evidence wherever it leads—they are rarely seen or heard, and we’ve watched too many occasions of reprimand and worse, when some heedless fellow opened his trap in the wrong way and had to apologize or go home, not to be certain that the rest of the professorate realize the costs of a big mouth.

The result is a conformity I never would have expected to spread so widely. In 1985, when I was in graduate school, the master theorists were Michel Foucault, Jacques Derrida, Edward Said, Richard Rorty, and Stanley Fish, and all of them were marked as daring, outspoken, iconoclastic, and, most importantly, uninterested in following the pack. What would they think of a petition signed by 1,500 people attacking an associate professor of history at the University of Chicago for intemperate statements about identity politics in Medieval Studies? What would they say about a journal agreeing to retract an article that offers some defenses of colonialism on the grounds of the article’s offensiveness. “Appalling and pathetic!” they would snort. “Contesting received wisdom is exactly what we’re supposed to do.”

Today, obedience is the sure course. Tenured professors have more job security than just about anyone in this dynamic economy of disruptive innovation. Not even the pandemic harmed them, not financially. They went to a Zoom class and carried on. They could write their books and articles and prep their classes at home and never miss a paycheck. Strangely, however, all those protections haven’t made them more nonconformist. The profs are more agreeable than ever before, certainly on the hot sociopolitical matters of 2021. Things in the United States have become so screwy, the public square and political affairs such a parade of freakishness, that it’s hard to register how odd is this case of academic conformity. It is, indeed, a soft totalitarianism, and few people have the stomach to describe what now unfolds in plain sight.

Again, they know what will happen. “For nonconformity the world whips you with its displeasure,” Ralph Waldo Emerson stated a long time ago, and it’s no less true today. The remarkable thing is that the rule holds true in the very last place it was meant to do so. Free speech, free thought, free inquiry—those are the academic ideals. If you’re a rogue of some kind, but your work meets scholarly standards (which are apolitical), your colleagues and the administration must accept you. They cannot find you wanting. That’s what scientific method and peer review are called upon to guarantee: a nonpolitical evaluation of your talents.

But everything now has a political ingredient. That’s the ultimate triumph of Woke: the insertion of political criteria into places where they don’t belong. The gatekeepers of academia (liberals, mostly) won’t keep them out, not any longer. The leftists in the room, few though they be, have too much moral fervor, the liberals too few convictions of their own. Those two groups have managed to expel nearly all conservatives from the faculty ranks, and they’re probably happy about that. But the campus is no longer a zone of renegade minds and novel ideas. Woke premises sound more like platitudes than breakthroughs. (They are, in fact, many years old.)

What used to be a vibrant, energetic, rousing habitat of ideas and people in hot debate is now an oppressive, predictable, fatiguing workplace. They’ve ruined the university.