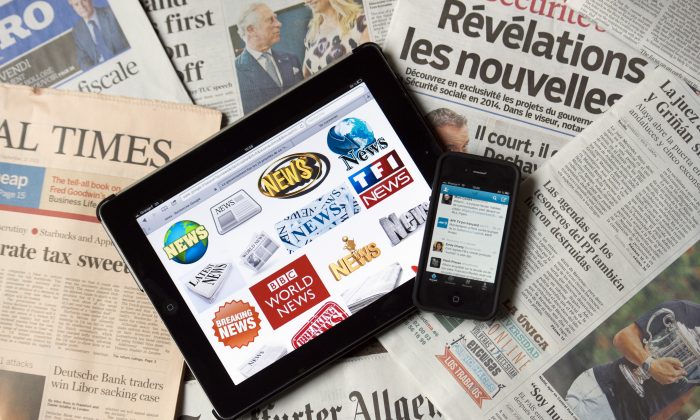 A tablet and a smartphone connected on news websites and world newspapers, in Paris, France, on Sept. 12, 2013. (Lionel Bonaventure/AFP/Getty Images)
Business & Economy

The impact of the internet on the newspaper industry has been starkly highlighted by a graph released by the U.S. Bureau of Labor Statistics. It shows how employment in that industry in the United States has declined by 60 percent over the past 25 years, from 458,000 in 1990 to 183,000 in March 2016.

This statistic reflects the decline both in the number of newspapers and the shift to reducing the number of journalists and other staff required to produce increasingly digital output from a newsroom. From 1990 to 2014, nearly 300 newspapers closed in the United States. What the data also shows is that at least part of the job decline in the newspaper industry has been taken up by the rapid growth in internet publishing and broadcasting.

Another growth area in that time has been in the massive increase in the number of people working in public relations which peaked first in 2000 at the height of the internet “Bubble” to regain those heights in the subsequent years.

The numbers are more stark than they appear because in that same time, overall employment has increased by 23 percent with the U.S. labor market adding 35 million new jobs.

This data simply confirms what has been obvious to everyone that with a disappearing business model for print newspapers, there is little room for the industry as a whole to continue to the same degree. The consequences of this are again not really going to be that surprising because in the end, it will be dictated by newspapers, who become predominantly digital, can make money. For a very few, this may be through digital subscribers. The New York Times, one of the few news sites that may pull off this transition with over a 1.2 million digital subscribers, still loses money. For most other sites however, digital revenue will come from advertising, driven by the types of content that drives clicks.

The internet has not just impacted the print newsroom however. The Bureau of Labor Statistics data also shows significant declines in both the magazine and book industries. Again, this decline has been driven by falling audiences and revenue in the switch from the more lucrative print market to digital.

Why the History of News Explains Its Future

The disruption of the paper-based media industries by the internet hasn’t just been a question of doing the same thing with fewer people on a different medium. What has also changed is society’s need and desire for this specific type of content. The disruption of these industries isn’t a question of simply not moving quickly enough to adapt to a new presentation format, it is that the content produced has far less appeal to the current audience who are increasingly spending less time on news sites and more time accessing content through social media and in particular, as video.

The disruption of the news industry has been not so much like the shift from typewriters to computers but more like disappearance of the whaling industry as the products of that industry were no longer of importance to society and alternatives were found.

To that extent, all discussions of paywalls and the desperate but illusive search for alternative business models for news organizations are in the end going to prove redundant. It is hard to convince people to pay for something that they have simply decided they don’t want to buy. It is not that the public won’t pay for content on the internet. They are only too happy to pay for video content through services like Netflix and other video streaming sites and for the equivalent services that stream music. News and opinion, on the other hand is something that increasingly is valued only when it is free.