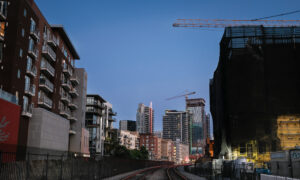 The Story of Jamie Soukup Reid and Will Reid, Newly Weds Killed in Car Crash

Jamie Soukup Reid, 25, and Will Reid, 26, were married in Philadelphia on May 26, 2013. They died in a car crash Sunday, Aug. 11, in North Carolina. They had hired a car to take them to the airport after a friend’s wedding. The driver, Rodney Koon, 45, lost control and crashed into a tree, reports the Philadelphia Inquirer.

Soukup Reid was pregnant, her father told the Inquirer.

“We lost our two kids and our first grandchild,” Ron Soukup said. “We loved Will like he was our son. He was a wonderful guy.” Reid told the paramedics to help his wife first, but neither survived.

The young couple were both teachers, having met in graduate school earning their masters degrees at University of Pennsylvania Graduate School of Education. On their wedding website, they each told the story of their meeting.

Jamie’s side of the story:

Will and I had a class together in grad school for almost a year before we officially met! He showed up at my 23rd birthday party with all my other teacher friends, acting too cool for school, and I remember thinking, ‘Who does this guy think he is?!’ I did not care for him at all!

A few months later, in the summer, we met again at a mutual friend’s house. This time our meeting was more successful–we instantly had a connection talking about our love of NPR and the German language. We talked to each other the whole night about  things like comic books and obscure music. When I decided to go, I said goodbye to everyone, but Will instantly got up and said he was leaving too. Outside, he offered to drive me home. Later that night, I saw an e-mail in my inbox, with a song attachment from the band “A Tribe Called Quest”, the band we had been talking about earlier. I was so excited that he wanted me to hear it!

Will and I hung out every day that first week, always in large groups of friends. That weekend, we went to the Jersey Shore in a group to stay at a friend’s house. On the boardwalk, right next to one of the rinky-dink rides, he kissed me for the first time! Ever since then, we’ve been together.

Will’s side of the story:

I first met Jamie in a graduate class called “School and Society” at Penn. I remember noting that she listened to NPR (a plus), but we didn’t talk to each other, as she was obviously much too cool and pretty to approach. We met again later that year at her birthday party, thrown by mutual friends, but she was busy celebrating, and I was trying to put out a cool and aloof vibe. We finally met for real at liberty lands park with a group of friends. I think I offended her several times with my attempts at humor, but I was intrigued by this smart, beautiful, German-speaking woman.

Over the next few weeks I contrived to be invited to various other social gatherings where Jamie would be present. We continued to talk about German stuff, graphic novels, Arcade Fire, and other important matters. I think we also played skee-ball. I wasn’t sure if I could get my hopes up, however, as Jamie was bright and friendly towards everyone she met. I thought that maybe she just wanted to make a new friend. I tried mentioning that I enjoyed her company, but her vague response to my statement left me wondering.

My answer came when we and a group of friends were invited to spend a weekend at Mark’s house on the Jersey shore. After a day on the beach, we all decided to take in the sights and enjoy the friendly atmosphere of the boardwalk in Seaside Heights, NJ. As our friends headed for the carnival rides, I held back a little in the hope that Jamie would ride with me. She stayed behind as well, and I thought that this sign, combined with the incredibly romantic ambience [sic] of our surroundings, presented an opportunity to see if she felt as I did. I decided to try and kiss her, and waited to be rejected, but I was not. It was an excellent decision.

While their wedding website celebrates the beginning of their life together, an obituary website allows loved ones to remember the good times and mourn their loss.

Lee and Gene Cloud wrote on Wednesday: “We cannot believe that our nephew and newly acquired niece are gone too soon. It was obvious that they were soulmates and they loved each other very much. How radiant each of their souls are in the hands of God.”

Gabriella Sterne of Ann Arbor, Michigan wrote on Wednesday: “Jamie and I used to ‘shop’ in each others’ closets, borrowing things and chatting about life. Jamie always had the best dresses, and in my mind she is always wearing a bright yellow one. She is a ray of sunshine in my life, and though we lost touch after Whitman I would often look at her pictures. They never failed to make me smile. Even just seeing Will and Jamie together made me sure that Jamie had found her love. It breaks my heart to lose a friend so young and full of life.”