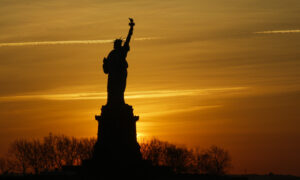 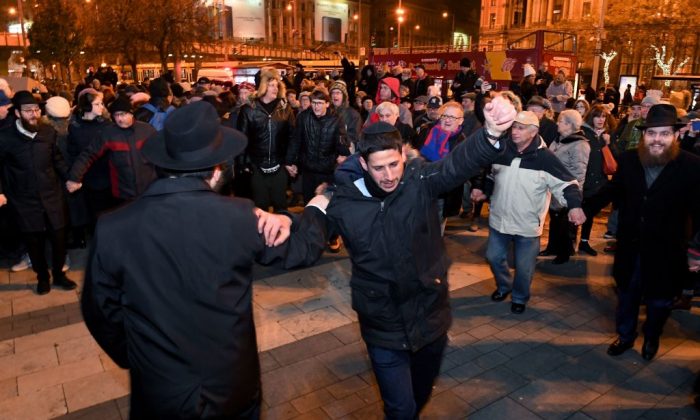 Members of the Hungarian Jewish community take part in a ceremony during which a giant Menorah is lit to mark the start of Hanukkah celebrations on Dec. 2, 2018 at the Nyugati (Western) square in the center of Budapest. (Attila Kisbenedek/AFP/Getty Images)
Viewpoints

The Story of Hanukkah

Beginning on the night of Dec. 2, Hanukkah celebrates the Jewish war for independence in the second century B.C. Although many gentiles know about dreidel games and menorahs, the history is unknown to most gentiles and even some Jews.

The ignorance is surprising, since the books that tell the story, the first and second books of the Maccabees, are part of the Roman Catholic, Greek Orthodox, and Slavonic bibles. Although not canonical in the Jewish and Protestant traditions, the Maccabees story helped inspire the Jewish guerrillas who fought the Holocaust, Great Britain’s Glorious Revolution of 1688, and the American Revolution.

So here’s the story of Hanukkah, as told in the books that have stirred so many freedom-fighters. The first book of Maccabees is a reasonably good history, much of which is confirmed by other classical histories and records. Like almost all classical-period histories, the book has a highly partisan point of view. The second book of Maccabees, which retells some of the same story, is less complete as history but superior as literature.

After the death of Alexander the Great, his territories broke into four empires. By the second century B.C., Israel was part of the Seleucid Empire, based in modern-day Syria and Iraq. For a while, the Seleucids were content with financial tribute from Israel, and otherwise left the Jews alone.

In 174 B.C., the new Seleucid king, Antiochus IV, got involved in internal Israeli politics, using increasingly harsh measures in support of Hellenizing (pro-Greek culture) factions and against the traditionalists. Eventually, he looted and desecrated the Jewish Temple in Jerusalem, thus alienating and radicalizing not only the traditionalists, but also many Hellenizers.

The Seleucids “put to death the women who had their children circumcised, and their families, and those who circumcised them; and they hung the infants from their mothers’ necks.” The Jewish religion was outlawed, and possession of a Bible was a capital offense. (1 Mac. 1:57-61).

When the Seleucid army moved into rural areas to compel enforcement of the new laws, a revolution began. In the foothills of the Judean Mountains, in the village of Modin in 167 B.C., the Seleucid army set up an altar, and ordered the local Jewish priest, Mattathias, to sacrifice a pig and eat it. He refused, as did his five sons. When a Jewish collaborator came forward to offer the sacrifice, a furious Mattathias “ran and killed him on the altar. Mattathias then ran and killed the king’s officer who was forcing them to sacrifice, and he tore down the altar.” (1 Mac. 2:15-25).

Mattathias and his sons headed for the Judean hills. In their first year, they gathered about 200 supporters, of whom about 50 were able-bodied men. They had no military training, and their only weapons were farming tools and whatever simple weapons they could construct, such as maces or slings. The Maccabees thus fulfilled the words of the prophet Joel, “Beat your plowshares into swords, and your pruning hooks into spears; let the weak say, ‘I am a warrior.’” (Joel 3:9-10).

During the first year of the war, Mattathias died; he designated his middle son, Judah, as successor.

Nicknamed “the hammer” (“Maccabee,” in Hebrew), Judah constructed a superb intelligence network. He staged increasingly daring nighttime raids on the Seleucid outposts, then melted back into the countryside. His successes attracted several hundred men-at-arms. Unfortunately, the Maccabees weren’t tolerant; among their targets were Jews who carried out Greek religious rites. (1 Mac. 2:44; 2 Mac. 8:6).

As the Seleucids began losing control of the countryside, in 166 B.C., Governor Apollonius led a force of 2,000 men to crush the revolt. Rather than face the Seleucids on an open plain, Judah invented a strategy that was unknown to military tacticians of the era.

As the Seleucids marched through a narrow mountain pass, Judah divided the militia into four groups. Two groups sealed off the entrance and exit to the pass. The other two groups fell on the Seleucids from the hills, attacking their flanks. Unable to maneuver or amass force, the Seleucid army was wiped out.

Jews flocked to Judah’s cause, accepting him as their national leader.

Antiochus appointed a new governor, Seron, who marched down from Syria in 165 B.C., following the wide-open coastal plain. The militia was terrified at the approach of the Seleucid army of 4,000. Judah spoke to his wavering men: “It is not on the size of the army that victory in battle depends, but strength comes from Heaven. They come against us in great insolence and lawlessness to destroy us and our wives and our children, and to despoil us; but we fight for our lives and our laws. He himself will crush them before us; as for you, do not be afraid of them.” (1 Mac. 3:17-22).

Approaching Jerusalem, Seron had to maneuver his army through a mountain pass at Beth-horon. Seron kept his forces widely separated, to avoid what had happened to Apollonius. Thus, the Israeli militia couldn’t seal the Seleucids inside the pass. Instead, Judah Maccabee, brandishing the sword of Apollonius, led a surprise charge straight at the head of the Seleucid column and General Seron.

As the Seleucids in the rear pushed forward to meet the attack, the Jewish militia emerged from the hills on both sides above the Seleucids. After laying down a barrage of arrows and slingshot fire, the flanking attackers swept down the hills, swords in hand, for close-quarters combat. When Seron was killed and his vanguard unit destroyed, the rest of the Seleucid army panicked and fled west toward the Mediterranean Sea.

A furious Antiochus decided that the Jews would be eliminated, and sent 24,000 men. Preparing for battle, the Seleucids invited slave dealers to come with ready cash for captive Jews. (1 Mac. 3:35-36; 2 Mac. 8:11).

Although the Maccabean militia had grown to 6,000, it was still heavily outnumbered. The Seleucids planned a surprise night attack on the Jewish camp. But Judah abandoned the camp, leaving only 200 men as decoys. As the 200 withdrew into the hills, being sure to be noticed by the Seleucids, they lured many of the Seleucids deeper and deeper into the hills, the Seleucids mistakenly thinking that they were chasing the tail end of the whole Jewish militia.

The ruse allowed the bulk of the Jewish militia to hit the Seleucid camp, near the village of Emmaus. But the Seleucid camp still had a substantial force, which was formed into a phalanx on a plain near the camp, ready for battle. Instead of attacking head-on, the Jews concentrated on the flank of the phalanx, and it began to crumble under the fierce hand-to-hand assault from the Jews.

When the Seleucids who had been lured into the hills returned to camp, the found the camp in flames and the Hebrews in arms. The last portion of the Seleucid army collapsed and ran for the sea. Vast quantities of advanced Seleucid military equipment fell into Jewish hands.

Nothing was left of Seleucid control of Jewish areas, except for a garrison in Jerusalem. The force that began with Mattathias and his five sons now numbered 10,000 strong.

Syrian viceroy Lysias marched south from Antioch with 20,000 infantry and 4,000 cavalry. Six miles north of Hebron, near the Jewish fortress of Beth-zur, the Seleucids were moving through a mountain pass when the Jews descended on their flank. Quite soon, the Seleucids had lost 5,000 men and withdrew the remainder of their army.

Judah’s forces advanced to Jerusalem and were attacked by the Seleucid garrison there. While that battle continued, a portion of the militia entered the city. The Temple had been horribly desecrated and the Hellenizers had scrawled profanities on it.

The Maccabees built a new altar. On the 25th of Kislev, in the year 164 B.C., they lit their one-day supply of oil in the Menorah. The oil burned for eight days. The eight days of Hanukkah celebrate that miracle, and the divine intervention that had led the Jewish militia to smashing victories over well-equipped standing armies far superior in numbers. The oil miracle doesn’t appear in the books of Maccabees; it comes from rabbinic literature written during the diaspora.

The war went on for years, and the Jewish militia was nearly wiped out in 160 B.C.

But with the Seleucids under pressure from the Persians to the east and from the rising Roman republic to the west, the Seleucids became more accommodating toward Israeli autonomy. Israel formally declared independence in 143 or 142 B.C. The small Israeli state maintained its independence for about a century and was then absorbed into the Roman Empire.

The eternal light of Jewish freedom was never extinguished. Today, it shines brightly in the Middle East’s only democracy, and its example continues to inspire people of diverse faiths.