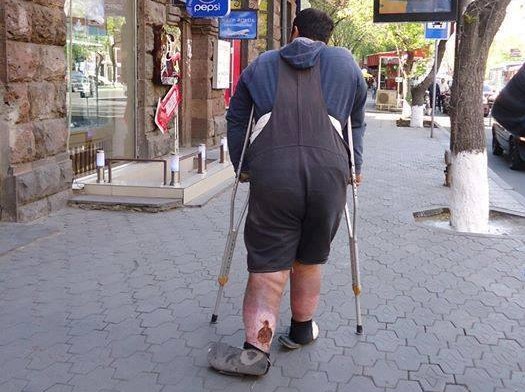 (Provided by the author)
Inspiring the World Competition

The Story of a Beggar

“Juju, see how much money I have, all by the passers-by. What’s wrong with you? You’re worn out,” said someone and disappeared. It was one of the guys from the orphanage, who ate so much that they used to call him a “bun.” He is one of the most reputable and oldest beggars of the city; he even owns his territory. Hardly dragging the legs, he reached the crossroad, collapsed on the floor with all the strength of his body and spread over his handkerchief; who knows, luck may come his way, too.

This is how one takes up begging. First drowning your dignity, you hardly look into the eyes of people, then, slowly, you master that “art” better than “professionals.” You skillfully catch the look of everyone and figure out at the right point whom to bless, and whom to curse. He calls “kings” those who give much money, but you cannot meet kings every day, and you should somehow survive, yes? Step by step you learn to look straightforward into the eyes of passers-by, even with claimer’s rights.

In a territory of 15 m2 even a tiny TV-set seems to be huge, there is a ruined wardrobe on the left corner, with no doors, there are different pills there, none of which are familiar to me. There are colorful bundled up blankets on the bed, on the one side–many, on the other–a few: thus it’s more comfortable for the sick leg. The windows are open.

“I have opened to let the fresh air in. I care for my wound myself, in the past I was panicking, did not know what to do in confusion, then I thought that if I do not help myself, no one will do. For some period I was staying in a nursing home, they were not taking care of my wound, so it was stinking, people from the rooms next-door were wondering whether someone had died. And I got offended, if you don’t cure the wound, it will stink, right? So, I escaped from there.”

Ashot has a symptom of elephantiasis, it’s impossible not to notice it as the indescribable swelling and non-standard sizes of his feet already make the strange illness visible. When you talk to him, you think he had graduated from a university, and only then took up begging, so intelligent he is.

At the orphanage I was not allowed to take books: first they thought I was pretending to be reading them, then when they discovered I did read, the children started complaining, that ”this fake professor” leaves the lights on during the whole night; don’t give him any books! I would go every day early in the morning to the library and stand in front, take several books, grasping every line to return it quickly and get a new one.

Ashot was born in Georgia, in Havlabari. Tamara, his mother, was told that her child would be born diseased, so she hurried to get rid of the child. Ashot had searched for her, one of his acquaintances had given him addresses of people who knew his mother. Ashot had gone from one to the other, but no one dared to ”become” his mother.

-You know, I was blaming my mom, then I understood she’s a saint: couldn’t she get rid of me? But she gave birth to me, and I love it. Those who see me in the streets, advise me whatever comes to their minds: euthanasia, suicide by jumping from the bridge…one day a woman shouted that they shouldn’t give me money, and it is just a matter of a single injection to go…But I try to neglect again, I want to live, you see? If I found my mom, I would treat her as a queen, it’s her who has gifted me with life.

-When walking down the street, I can tell which child is from a family, which from an orphanage: there’s a lack of love and care in the eyes of orphans, you won’t feel that, I do see as they have same eyes as me, you won’t see.

-You go begging by taxi, right?

– I ask looking directly into his eyes, and feel it sounds as an accusation.

-No, don’t think I am a rich beggar, and it’s just a matter of luxury. Go to the City Hall and ask how many letters they got from Ashot Grigoryan, requests to adapt a bit the public transport to the needs of people with disabilities. Drivers see I can hardly stand on my feet, and do not stop to pick me up. I am a bit heavy, I get into the bus with difficulties, and they don’t want to wait for me, so I take a taxi to go and gather money.

-People are sometimes so cruel, till tears, especially on rainy days they are in a hurry, don’t seem to notice me, and I become aggressive, since if they don’t give that money, I won’t be able to buy the medicine. So, I get offended from people and go to church, water the trees there, help in anything, but I don’t take money for that, I want to find myself there, find answers to my questions, and live as other ordinary people do…

We finished our conversation but excitement flared up in me.

-Why do your old acquaintances call you Juju?

There’s a dump in Yerevan, I was staying there with a friend. One day we went to beg, and the car crashed into us. I was sitting in the middle of the street with my only dear one bleeding in my hands. He died in my arms, I couldn’t speak for two years, complaining against this crooked world, and the only thing I uttered was ”Juju”…that’s why they call me so.

I say ”good bye” to Ashot. I hear Adele singing in my headphones, find myself in pink Yerevan, but neither Adele, nor the pinky city do not fill in the real emptiness that was left after Ashot, the beggar, who is a part and parcel of Yerevan, and without his presence Yerevan would be incomplete and bleak.