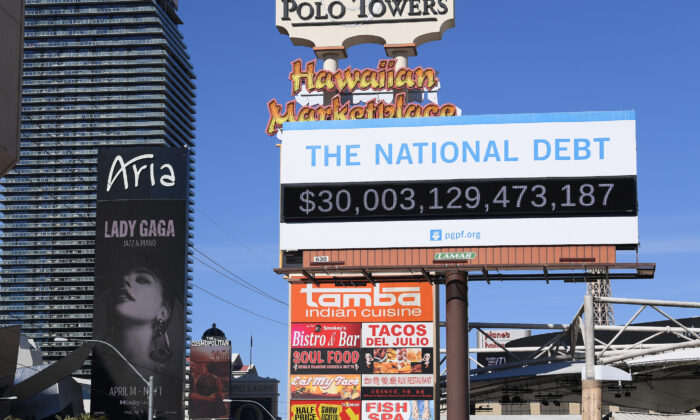 The State of the Union Is … Broke

To quote a screaming John McEnroe: You cannot be serious!

Last week, the Biden administration requested another $30 billion for COVID relief programs. Yes, I know that these days, $30 billion is a rounding error in the $6 trillion federal budget. But isn’t that precisely the problem?

But as Joe would say: Come on, man! The White House’s latest plea for more money on top of the $4 trillion to $5 trillion is an insult. Biden wants $18 billion for antivirals, $5 billion for testing, and $3 billion to combat future viruses.

Isn’t that already the job of the $7 billion-a-year Centers for Disease Control and Prevention (CDC)?

It’s an incredibly brazen request given the hundreds of billions of dollars of wasteful and fraudulent payments under the $1.9 trillion American Rescue Plan passed last year. That includes $150 billion in theft from the unemployment insurance program, an estimated $200 billion in wrongful payments under Medicaid, and at least $100 billion of fraud in the small business PPP program. (The fraud number could be much more significant than this, but the investigation is ongoing.)

Then there’s the $2 billion spent on mailing COVID test kits to people. So in the middle of the Omicron wave, we effectively took the test kits off the shelves of local pharmacies and stores at a time when people needed the tests and then used the Postal Service to mail the free kits to millions. But guess what? Many of the kits took more than two weeks to arrive, and many more still haven’t arrived. They will eventually, but the latest wave of the virus has passed. So I suspect most will get thrown in the garbage—your tax dollars at work.

The outrage here is that no one in Washington seems to be outraged.

One of the new and few heroes of the taxpayer is Sen. Mike Braun, the Republican from Indiana. I recently asked him why no one stops the spending machine on Capitol Hill. He shook his head and told me there are “only about three people in the Senate who actually want to cut government spending.”

While Republicans are generally better on spending than Democrats, they are hardly fiscal saints. There were 19 Senate Republicans who voted for the bloated $1.1 trillion infrastructure bill, and more than a dozen Republicans support a $300 billion corporate welfare bill for American microchip producers, computer companies, and so on, which is called the “American Competitiveness Act.”

Can someone please tell these members of Congress that the way to make America more globally competitive is to stop spending and borrowing so much money?

With the national debt now at $30 trillion, Congress should demand an immediate, thorough audit of every government program to find out where the waste is. Then, instead of spending billions more, it’s time for an across-the-board 10 percent cut to every program. Then cut 3 percent to 5 percent each year until the budget is balanced. Is that so hard?

Oh, and by the way, you know that $30 billion that Biden wants for more COVID spending? Believe it or not, there’s still at least $500 billion from the last COVID bill that still hasn’t been spent. How sad is that? The government can’t spend fast enough the money Congress is giving it.

In other words, the state of the union is … broke.