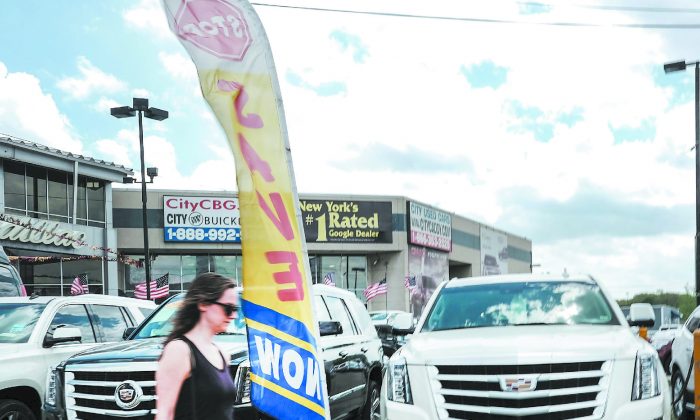 An auto dealership in Queens, New York, on May 2. Auto loans, dubbed the new subprime, are the fastest-growing category of consumer debt. (SPENCER PLATT/GETTY IMAGES)
Business

The State of the Global Economy

The US and global economies are doing fine, but not everything is as good as it looks
By Valentin Schmid
biggersmaller
Print

It could always be better. Growth could be higher than the 2.6 percent seen in the second quarter. There could be more full-time manufacturing jobs, instead of the thousands of part-time bartending and waitressing jobs added every month.

But despite these drawbacks, the U.S. and global economies have been growing consistently, avoiding major hiccups since the last recession, ending in 2009.

Another thing that has been consistent is the inconsistency of economic indicators. And this mixed picture, neither decidedly positive nor decidedly negative, is the one we see today not just in the United States but across the globe.

United States: Great, Except for Auto and Retail

Despite the justified criticism of the official unemployment rate—that it doesn’t accurately reflect the number of people who are employed only part time or who are no longer looking for work—it’s now lower than before the previous recession.

Inflation is moderate, ranging from 1.6 to 2.7 percent in 2017, with the biggest contributor being rent. Some durable goods prices are trending lower, however, creating consumer purchasing power. “We see outright deflation in some select consumer items—good for consumers if they have spare cash and room in their closets to store the ‘stuff,'” wrote research firm TS Lombard, in a report.

Another positive: Wholesalers are doing well. “Sales and inventories grew again in July, with sales accelerating more rapidly. We can see the positive impact on goods flows [in] railcar loadings of containers, which are well ahead of last year and marginally ahead of 2015 as well,” wrote Lombard. “Wholesale sales data provide a strong indication of continued economic expansion,” although Lombard excluded the auto sector, which is one of the more problematic areas of the economy.

Even the embattled retail sector did well in July, with retail sales increasing by 0.6 percent month over month in July. But here is where the problem starts. A boost has occurred in motor vehicle sales, with record incentives like discounts and cheap loans, and it may not be sustainable.

Auto loans have been the fastest-growing category of consumer debt and are dubbed the new subprime because of the low quality of the borrowers.

“Essentially, the dealers are not selling cars. They are selling bad loans,” Adam Taub, a lawyer in Detroit who specializes in auto loans gone bad, told The New York Times.

While vehicle sales edged up in July, motor vehicle production cratered 3.6 percent in July compared to June. Used car prices, not propped up by buyers’ incentives, are at the lowest level since the last recession and 10 percent below the high of 2013.

And even though retail sales recorded a relatively strong month in July, the industry is still in a shambles, with record store closures, bankruptcies, and layoffs.

While the sector added around 200,000 jobs per year between 2014 and 2016, it lost nearly 110,000 from January to May this year, according to the Institute of International Finance.

Big name bankruptcies include RadioShack (for the second time since 2015) and The Limited. According to an analysis by investment bank Credit Suisse, there could be up to 8,640 store closures by the end of the year.

So the candor of Ed Stack, CEO of Dick’s Sporting Goods, was hardly surprising when he told analysts on an earnings call that “there’s a lot of people right now, I think in retail and in this industry, in panic mode.”

“It’s been a difficult environment,” Stack said. “I think people—I’m not going to speculate what they’re thinking—but they seem to be in panic mode with how they are pricing product, and we think it’s going to continue to be promotional, and at times irrational, going forward.”

In the meantime, shares of brick-and-mortars’ nemesis, Amazon.com, are up 28 percent this year. The company reported a 25 percent increase in revenue for the second quarter.

Rest of World: Positive on Balance

The rest of the world presents a similar picture, excluding Japan, which hasn’t contributed or detracted much from global growth for the past two decades.

Euro area growth could also be faster than the 0.6 percent in the second quarter, but former crisis countries like Spain and even Greece have done well, growing 0.9 percent and 0.4 percent, respectively.

“There’s always more that you’d like to see, but [Spain has] done more regarding structural reform than any European country since the Great Financial Crisis, and they’re reaping the rewards,” said Citigroup chief economist Willem Buiter.

He thinks the main risk to a sustained euro area recovery lies within the banking systems of the stronger countries, which haven’t been cleaned up after the crisis.

“The rest of Europe is still trying to sort out their balance sheets. Look at Italy, Germany, and Austria—these countries still have major under-resolved banking issues. According to some estimates, there is a trillion euros’ worth of nonperforming loans on the eurozone banks’ balance sheets—and this is nine years after the Great Financial Crisis.”

The second biggest risk comes from the recent strength of the euro, which rallied 12 percent against the dollar this year.

Euro area exports hit record highs of 205 billion euros in March this year, but this performance can’t be sustained if the euro remains high against major trading partners—especially China, which imports a lot of high value-added products.

“If the euro continues to strengthen, the EU economic recovery is at risk,” wrote economist Daniel Lacalle in an Aug. 17 article for The Epoch Times.

Emerging markets have so far benefited from a lower dollar and are growing at rates ranging from 1 percent for Brazil and Argentina to 5 percent for Indonesia in the second quarter.

“Fundamentally, dollar weakness is a stimulus to world growth and inflation,” research firm Oxford Economics wrote in a note to clients. The easier it is to get dollars for developing countries, the more they can participate in global trade.

There are now signs real estate is slowing in response to policy tightening.
— From a report by Oxford Economics, about the Chinese real estate market

Geopolitics and North Korea aside, China is the world’s second-largest economy to move the needle for world growth.

Although China eats away growth from the rest of the world through a trade surplus, the surplus has been smaller so far in 2017 compared to the same period in 2016.

Thanks to a re-inflated housing bubble, imports rose faster than exports, benefiting the rest of the world. “The massive real estate boom has powerful secondary effects by driving demand for building, finishing, and decorating materials,” wrote James Nolt, a senior fellow at the World Policy Institute.

On balance, the rest of the economy in China was also strong. “This quarter was a best-case scenario for China’s economy. We’ll call China out when things are much worse than they admit, but this time it’s good or even slightly better in some ways. It was exactly what the Chinese government was hoping to hit at this time of the year,” Leland Miller, president of research firm China Beige Book, told The Epoch Times in July.

However, Miller says the market should not put too much faith in the manufactured GDP growth of 6.9 percent for the second quarter.

Once the debt-fueled property boom comes to an end, it will have consequences for the rest of the world, which has benefited from exporting into the boom. And this year, the Chinese authorities have shown their determination to curb excessive price growth through regulation and monetary tightening.

“There are now signs real estate is slowing in response to policy tightening. This could weigh on Chinese imports and global commodity prices, curbing the global cyclical upturn—and a look at past Chinese house price cycles suggests a risk that price growth could retreat quite sharply,” Oxford Economics wrote in a report.

And while prices have held up so far, residential floor space sold over the last three months crashed 27 percent for the top-tier cities in July.

“Activity weakened across the broad, with a particularly pronounced slowdown in the property sector,” wrote TS Lombard, in a report.

However, TS Lombard does not think this will be a big problem, as manufacturing is doing well and exports should cushion the impact on growth, provided the rest of the world, especially the United States, keeps their current trajectory.