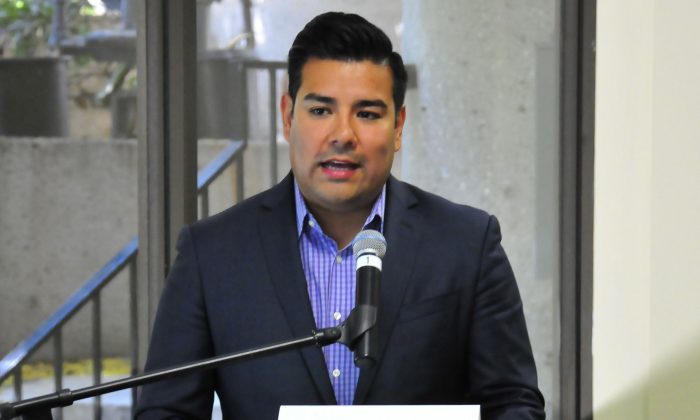 The State of Medi-Cal

California Senator Ricardo Lara (D-Bell Gardens) was the keynote speaker at a media briefing in Los Angeles on California’s has a new health insurance plan that will cover all Californians regardless of citizenship, income, or current health condition. Sandy Close, executive director of New America Media, hosted the event.

California’s healthcare initiatives started in 1929 during the Great Depression. It grew from there and eventually became Medi-Cal, which was established in 1965 to operate California’s Medicaid healthcare insurance system.

In 2013, Medi-Cal began administering California’s Affordable Healthcare Act (Obamacare), which can provide health coverage to over 34 million Californians, including immigrants. However, approximately 3.5 million undocumented immigrants (9.5 percent of Californians) cannot enroll in Obamacare and have been using emergency room services for health services as a last resort. Medi-Cal will reverse that and make all families eligible for regular coverage.

In 2012, President Barack Obama announced that the U.S. Department of Homeland Security (DHS) would not deport certain undocumented youth who had come to the United States as children, thus allowing them coverage under Obamacare in some instances.

Federal law requires that children must live with their family to be eligible for Medicaid and Medi-Cal. Currently, students remain subject to the old rules of Medicaid until the “Full” Medi-Cal program is implemented, causing some students to be ineligible for coverage if they are not living with their families.

The experience of Itzel Martinez is all too typical of those who have been denied coverage under Medi-Cal. Miss Martinez is 20 years old and a student living away from home, thus limiting her to emergency room treatment. She wanted coverage but was caught in a maze of regulations that affected some 125,000 young people. A kitchen accident caused Martinez to visit the emergency room, costing her farm-working parents some $1,500. She and her family have been hounded by a collection company since then.

In another case, Bernardina Garcia, also an ineligible student, had been nursing an ear infection with home remedies for several months without medical coverage. She is awaiting her approval for the new Medi-Cal program.

Undocumented immigrants are legally prohibited from enrolling in Obamacare. Medi-Cal will reverse this problem that is affecting 3.5 million Californians.

Among the speakers was Dr. John Connolly, associate director of the Insure the Uninsured Project. He discussed in detail the challenges in getting the word out to minorities. “Locating and notifying these groups have been very challenging,” said Connolly.
Undocumented Immigrants Speak

Many undocumented immigrants will not step up to get coverage because of fear of being deported. Other issues are language and social barriers for smaller groups of foreign-born adults.

Irma waited 3 years to get her hip replaced and debilitating diabetes treated, despite risk of deportation. She is now on a treatment waiting list through Medi-Cal. Alessandro said he “hadn’t had a proper doctor’s visit” since he was seven years old and “can’t wait to get a physical when I am insured.”

Senator Lara spoke about the challenges that the legislature had to overcome to get California’s healthcare act crafted to meet the requirements for insuring all Californians. The California legislature finally produced a plan that would protect all Californians, including immigrants, legal and illegal. The final language includes illegal aliens at the same rates as legal immigrants.

The law makes no express provision for distinguishing among residents based on immigration status, instead basing eligibility only on physical presence in the state with the intent to remain there indefinitely.

“This was among the toughest areas we had to legislate,” said Senator Lara. “They are tight-knit groups that include people from Asia, Mexico, South America, etc.” Getting the data and communicating with these groups was difficult to determine their health needs and cultural acceptance of the plan.

Senator Lara, at one point suddenly remembered a detail, and said, “We actually found a sizable group of Canadian undocumented immigrants! We had no idea they existed in California. They will also be covered!”

In a private interview with The Epoch Times, Senator Lara addressed the issue of adding 3.5 million additional insured to the Medi-Cal program.

“We are only adding 3.5 million new insured, which may seem large. However, these are people have been using emergency care at the hospitals when a condition becomes critical, rather than preventative or normal care,” said Senator Lara.

He said that they have studies that have determined the actual needs under the new program. The results indicated that the additional savings from expensive emergency care that frequently goes unpaid will be offset with much lower treatment costs for preventative and non-emergency care. There is a consensus that this is not a deal breaker.

When asked about people who choose to opt-out of Medi-Cal, Senator Lara said, “The federal penalty will still apply when you file your annual federal tax return. Eventually, the penalty could approach the same cost as the premiums for Medi-Cal.”

“Why would you risk a very expensive hospital care or emergency room treatment when you could use the Medi-Cal program?” said Senator Lara.