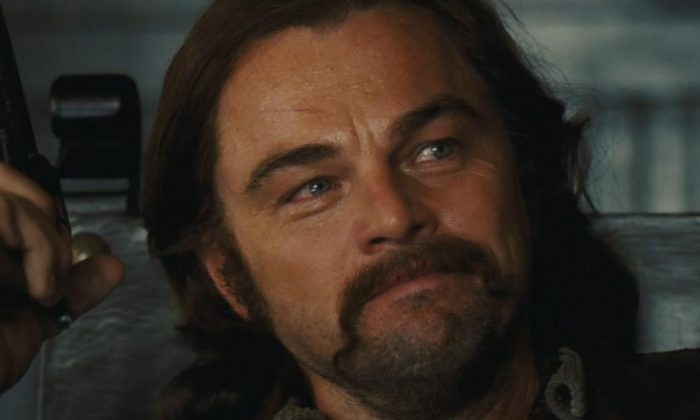 Leonardo Di Caprio stars in “Once Upon on Time in Hollywood.” (Andrew Cooper/Sony Pictures Entertainment)
Viewpoints

The State of American Movies

Do movies shape culture or does culture shape movies? The influence goes in both directions, but I think predominant cultural values have the upper hand.

One of the first principles of successful business in a market economy is, give customers what they want. So, while Hollywood often pushes the envelope in challenging, even assaulting, traditional sensibilities, moviegoers’ purse strings act as a cultural ballast, impelling movie-makers to infuse their stories with certain bedrock cultural values.

The movies that my wife and I have seen at theaters this year make me feel optimistic about our underlying cultural health. Obviously, this is not a scientific study, since we’ve only gone to the movies nine or ten times this year, and naturally our movie selection reflects our tastes. Among other things, that means no horror movies. It always amazed me back when we had video stores that the largest selection consisted of gory slasher/horror movies. I’m sure filmmakers are still catering to whatever demographic finds such fare entertaining, but that’s not us.

Neither do we patronize violent movies in which the hero is a remorseless angel embarked on a vengeful rampage, such as John Wick, Rambo, or Liam Neeson’s latest role. While the worst of the worst suffer for their sins in consonance with our American sense of justice, the unrelenting grimness of the protagonists doesn’t appeal to us. We won’t see “The Joker” either. It may or may not provide some insight into psychologically damaged individuals, but it titillates with violence and mayhem, so “no thanks.”

Following are some of the movies we’ve seen. I’ll grade each one according to how well I think it was done and then offer brief comments on the quality of the movie and what it says about current culture.

Disney is still Disney. We saw “Mary Poppins Returns” (B)—beautifully creative fantasy sequences, but not as magical as the original (which may be a comment on my age more than the movie)—“Ralph Breaks the Internet” (B), “Toy Story 4” (B), and “Dumbo” (C+)—a wonderfully lovable Dumbo, but the ordinarily excellent Michael Keaton was a boring bad guy.

Look, I’m not the demographic Disney is aiming for, and if I were 10 years old, I’m sure I’d give them all A’s. However, I commend all these movies for their sweetness and clear portrayal of what’s good and what’s not. They exalt kindness, decency, caring, love, friendship, etc. Hats off to Disney for continuing to promote a humane and hopeful moral universe.

“Yesterday” (B). Clever premise: Collective amnesia erases the Beatles and their music from everyone’s memory except an aspiring young musician who proceeds to share the Beatles’ music with a grateful, adoring world. The plot line was thin, and the movie lagged during the first half. And the ridiculously exaggerated caricature of a hyper-greedy agent, instead of adding comic relief, like it was supposed to, was a terrible bore. However, I very much appreciated the chaste, respectful love between the two leads. Chastity appears to be making a comeback on the silver screen. The message that the world would have a little less joy in it, if not for the gift of the Beatle’s musical genius. Lesson: Let’s appreciate our blessings.

“Once Upon a Time in Hollywood” (B). This Quentin Tarantino movie was hard to watch in places (sometimes too meandering, sometimes too horrific) but impossible not to watch. The acting was superb. Leo DiCaprio, who has never been one of my favorites, was often brilliant. Brad Pitt’s laid-back, quietly self-confident persona remains as charismatic as ever. Another plus was the number of times the ‘60s rock group Paul Revere & the Raiders were heard and seen. Good choice, Quentin! The reason for the Raiders’ prominence, of course, is because the house rented by Sharon Tate and Roman Polanski had previously been the home of Raiders’ producer Terry Melcher.

On the dark side, the obviously warped and unhinged derelicts who comprised the Manson gang were portrayed without redeeming qualities. So repulsive were they presented (could they really have been so completely degenerate?) that when Tarantino rewrote history and had the would-be murderers killed in increasingly lurid ways, one is torn between horror and guilty pleasure. The horror was that such things would happen to any human being; the pleasure was a catharsis—watching depraved criminals get their just desserts in spectacular over-the-top fashion. Indeed, there was infinitely more justice in the fictitious dénouement than in the historical one, in which the Manson gang butchered innocents.

“The Peanut Butter Falcon” (B). Another movie with several endearing characters but a thin plot line. A clear message of this movie was to portray unkind, compassionless treatment of Down’s syndrome people as the stupidly ugly and cruel prejudice that it is. As in “Yesterday,” this movie depicts a blooming love interest characterized by sexual restraint stemming from healthy self-respect and other-respect. Just as shows such as “Rin Tin Tin” and “The Lone Ranger” taught values of respect for others to my generation, so “The Peanut Butter Falcon” does for the rising generation. Bravo!

“Downton Abbey” (A). Yes, this was my favorite movie of the year. This could only be so because my wife and I had watched the entire TV series from start to finish, forming strong attachments to Downton’s lovable, believable, oh-so-human characters. Frankly, I wouldn’t recommend this movie to anyone who hasn’t seen what trials, triumphs, and tragedies the characters had gone through over the years; indeed, not knowing the back stories, the significance of so many actions and lines of dialog would go over your head.

“Downton Abbey” is shamelessly contrived, manipulative, and unbelievable. I loved it. It was a gift from the creator of these characters, Julian Fellowes, to the massive global audience won over by the TV series. This movie was designed to be the cast’s triumphant valedictory; loose ends were tied up and there was a happy ending for everyone.

Was it realistic? Of course not. But good fiction sometimes can be both inspirational and aspirational. It can show us the enormous potential of kindness, decency, love, patience, courageous correcting, and principled behavior to accomplish good and achieve happiness, harmony, and fulfillment. Being a good person doesn’t guarantee that you will live happily ever after on Earth, but it makes you worthy of happiness and, practically speaking, it increases your odds of attaining peace and contentment. With “Downton Abbey,” we have yet another movie that celebrates and upholds traditional values in a way that connects and resonates with American audiences.

Concluding remarks: You might have noticed that my most commonly awarded grade was a “B.” These were good movies with a few weaknesses. There isn’t a single movie here that I would counsel you to avoid (although if you are squeamish about violence and aggressively foul language, you should bypass “Once Upon a Time in Hollywood”).

My overall assessment of the state of cinema in 2019 is that, while there are plenty of controversial and objectionable elements in today’s movies, it’s clear that Americans still inhabit a moral universe in which good, justice, love, and friendship are admired and desired. We’re good people. Yes, we have challenges, but the American soul still values right far above wrong. Now, if we only could agree on what is right and wrong in politics and government.