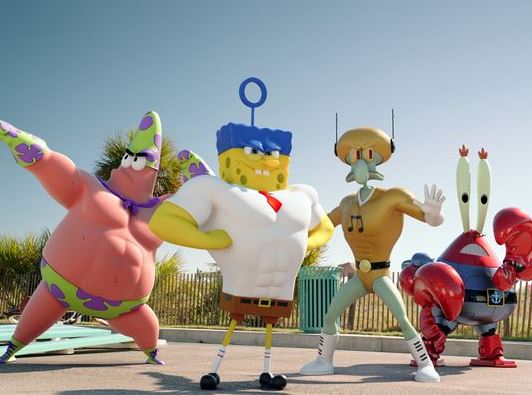 New pictures from the upcoming Spongebob movie “Sponge Out of Water” show Spongebob along with Patrick, Squidward, and Mr. Krabs.

Spongebob and the rest will be leaving their animated sea city Bikini Bottom to go out of the water in the movie, which is slated to hit theaters on February 13, 2015.

“It’s a bold new world where no Sponge has gone before. I’m still getting used to it,” Tom Kenny, who has voiced SpongeBob for 17 years, told USA Today.

“You’ve seen someone in a certain way for so long… It’s just really different.”

The character’s personality will remain about the same, despite the new surroundings.

“It’s not like SpongeBob has gone through any personality rewiring, there’s no reboot. Daniel Craig will not be voicing him,” Kenny said.

The team starts in Bikini Bottom but transform into computer graphic superheroes to fight off a danger to their beloved world.

“It’s the big climax of the movie,” said director Paul Tibbit. “They all come to shore in our world. And they transform themselves into an Avengers-type team to do battle. Their world is in jeopardy.”