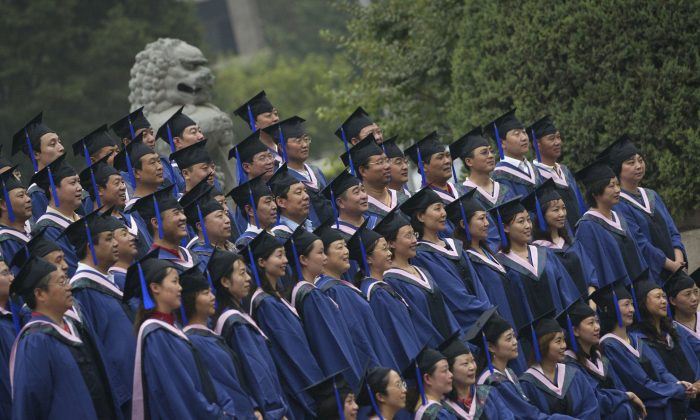 In this file photo, graduates with a master’s degree pose for pictures during a graduation ceremony at Peking University on June 24, 2006, in Beijing, China. (China Photos/Getty Images)
Opinion

The Spirit of the University Dismissed in China

In the wake of the recent dismissal of Peking University professor Xia Yeliang, a reporter of the regime mouthpiece Xinhua News Agency interviewed the University’s spokesman on why Xia’s contract was not renewed.

Peking University claimed that since 2008, 25 teachers’ contracts have not been renewed, which, it said, proved Xia Yeliang was not dismissed for political reasons. However, among those 25 people, Xia was the only one that Xinhua News Agency specially focused on, which proved the incident was in fact highly politically motivated.

Peking University said that the reason for the dismissal was Xia’s poor teaching evaluations. “There are over 340 critical comments from students, and there are even more than 20 students who jointly signed a plea to demand their teacher be changed.”

Moreover, Xia did not pass the University’s academic evaluation because “during the period from August 2008 to January 2013, Xia Yeliang only published one paper (jointly with his students) on the Chinese Social Science Citation Index,” the University said.

Of all the 20 students who asked to have their professor removed, how many of them are Party members and people who collect information for the Party? What were their reasons for having their professor removed? Were the students questioning the professor’s ability to teach? If this simple issue cannot be clarified, it will easily mislead the outside world.

Peking University requires that each class hire one to two people to collect information, and the hiring process is never made public. According to a reliable source, some students were indeed unhappy with professor Xia’s teaching.

Once, during a lecture in which Xia Yeliang talked about how socialism has been a total failure in the 20th century, a student rebutted Xia’s opinion. After the class, professor Xia invited the student to continue the discussion after class, but the student turned down the request and was thoroughly delighted with how he had the opportunity to show how much he loved socialism.

During another lecture, professor Xia said that over 30 million people had died during the Three Years of the Great Chinese Famine. Again, a student rejected Xia’s take on the issue, calling it slander.

Some students have accused Xia Yeliang of “sharing politically dissenting views.” Sadly, these students do not realize that the university is a place meant to foster skeptical and inquisitive thinking.

These students are so ignorant as to believe completely in the government’s ideology, refusing to acknowledge true historical accounts. If the real reasons why these students are “unhappy” were made public, Peking University would be quite embarrassed.

Since the “Reform and Opening Up Policy” began in China some 30 years ago, the limitations imposed by “curriculum standards” has meant that diversity and vitality do not come from the curriculum.

Rather, independent ideas come solely from the professors themselves, or more particularly, a group of courageous professors, who still think independently. However limited in number these professors are, there are still some left.

Back when I was a graduate student at Fudan University, some young professors who had been warned by the university for challenging Marxism were very popular among students. Whenever a poster of a seminar presented by these professors was put up, the entire class was packed to its full capacity.

Some of these professors, already in their middle age, left China after the Tiananmen Square massacre, while others were forced to take on a different stance under tremendous pressure. Actually, this is a huge loss to the spirit of the university, which is also a huge loss for the students as well.

There is a guideline in China’s university system according to which a lecturer’s research ability is rated according to the number of publications in core journals. However, the core journals completely follow the requirement of ideology in deciding what to publish.

For this reason, in-depth social-science articles about current society are rarely seen in such core journals. In the 1980s and mid-1990s, those good articles that inspire people were published in a fringe outlet like the World Economic Herald, or in publications outside the Party system, such as Scholars, The East, Southern Weekly, Strategy and Management, and the 21st Century, which is affiliated with the Chinese University of Hong Kong.

The majority of the authors of those articles later became the backbone teachers in their schools, or dissidents like me.

The core journals’ mission is to act as the frontier of ideology propaganda. For instance, the Peking University Journal (the philosophy and social science edition) claims to “use Marxism-Leninism, Mao-Zedong thought, Deng-Xiaoping theory and Jiang Zemin’s Three Represents theory as guidelines, maintaining the correct direction of the humanities and social sciences, carrying out Mao’s cultural thought of letting hundreds of flowers bloom, and walking the path of combining reality and research.”

I reviewed the journal articles for the last three years. Most of them are on topics on history and ancient culture, and some of them are of quite good quality from the academic standpoint. But the articles touching on today’s reality, such as an article in the column “Beijing Forum,” articles discussing political science, Taiwan issues, and so on all have a heavy hue of ideology.

Refusing to Admit Why

In simple words, the spirit of the university opposes the interference of public power and encourages scholars and students to carry out research freely and independently within the scope of the law. This spirit takes the realization of the individual’s free development as the top principle and inspires a combination of criticism and innovation.

In recent years, Peking University has repeatedly warned Xia about speaking out on sensitive social and political topics. Yet, the university insists the dismissal is only a result of his teaching and academic performance.

Compared to Peking University, the state-run Global Times was straightforward. In an Oct. 22 editorial, it accused Xia of “gaining fame by drawing public attention” in recent years, often “making freewheeling speeches, or aggressively criticizing the authorities.”

The Global Times also gloated over Xia’s dismissal with a warning: “Being a dissident is a very special lifestyle in today’s China. Some liberal people are obviously optimistic about the future of such a style. If so, they should not worry about losses and gains.”

In the Global Times’ view, Peking University (and all other schools) should dismiss professors who are not afraid of speaking up. Such dismissals are reasonable and lawful in China, and whoever is dismissed should not complain.

Currently based in the United States, He Qinglian authored “China’s Pitfalls,” which concerns corruption in China’s economic reform of the 1990s, and “The Fog of Censorship: Media Control in China,” which addresses the manipulation and restriction of the press. She regularly writes on contemporary Chinese social and economic issues.

Translation by Frank Fang and Bill Xu. Written in English by Stephen Gregory.