Lofty goals turned into freedom without responsibility and consumerism 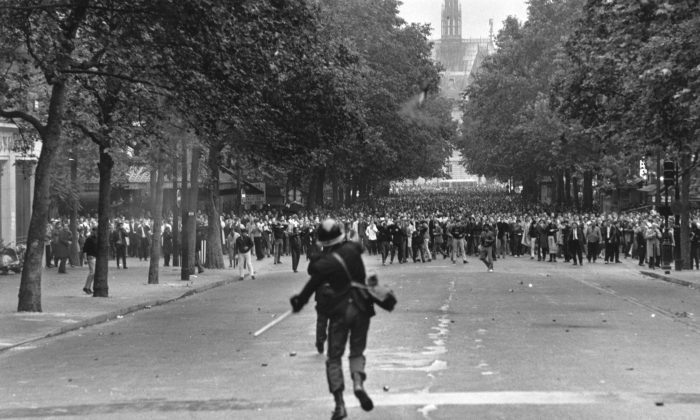 A policeman throws a tear gas canister to disperse crowds during student riots in Paris in the summer of 1968. The student protesters thought they would liberating people from consumer society, but ended up building a culture addicted to consumption (Reg Lancaster/Getty Images)

Fifty years ago, students in the Latin Quarter of Paris rebelled against authority. Their anger was directed against not only a university system that was probably too conservative and elitist, but also against the chief of state.

In spite of the democratic election, the president of the republic, Gen. Charles de Gaulle, ruled with the imperiousness of a monarch. He also respected the bourgeois order and individual property rights, allowing social inequalities to persist despite an economic boom. Hence, millions of workers joined the student movement in a general strike. These were the origins of “the events of May 1968,” as the French call them.

After weeks of street fighting, the socialist revolution failed to materialize. Instead, after the government agreed to a 35 percent increase in the minimum wage, De Gaulle dissolved parliament and called new elections.

The vast majority of Frenchmen supported the old general’s appeal to common sense and to safeguard the Fifth Republic. Nonetheless, these events are often said to have opened a new era of “liberation” in France—and the West—thanks to the “social struggle” they unleashed against conservatism and the consumer society. But is this the real legacy of the “spirit of ’68?”

Much inspired by the thought of philosopher Michel Foucault, the demonstrators of 1968 saw (illegitimate) “power” and “authority” in everything. A popular slogan was “Il est interdit d’interdire” (“It is forbidden to forbid”). The protests came to symbolize a way to liberate Western society from the conservative capitalist order with new music, sexual liberation, drug use, deliberative democracy, feminism, anarchist utopias, a rejection of traditional education, and a critique of consumerism.

In their passion for the “end of truth” (in philosophy and society) and the “deconstruction” (Jacques Derrida’s motto, taken from Martin Heidegger) of just about everything, one logical target of the soixante-huitards’ intellectual leaders was the traditional order of society. In opposition to these traditional truths, the rebels ended up propagating—despite their ostensible collectivism—a form of radical individualism.

However, as many political philosophers have shown, freedom requires rules. Without proper rules, society ends up with the opposite of freedom. Rules derived from traditions might not be perfect, but erasing them usually leads to even less optimal outcomes for freedom—as the French or Russian Revolutions should remind us. The same goes for “real, deliberative democracy” as an alternative to traditional, formal democracy: Without rules, it ends up granting power to those who shout the loudest.

Second, the “right to be different” can lead to extreme subjectivism, rendering any form of social coordination impossible. Third, the repeated references of the soixante-huitards to Marxism or Maoism, as well as their impassioned defense of violence, are quite paradoxical positions for advocates of freedom and emancipation to hold.

Ironically enough, much of the “liberation” that took place in the late 20th century can be explained by the evolution of consumer society—the very target of the rebellious youth in 1968. Electronics and computers enabled new styles of music; home appliances, processed foods, and contraceptives freed women from their traditional roles at home.

While the “social struggle” may have spurred more egalitarian redistribution, it was the postwar economic boom and the consumer society that made this redistribution possible, while equalizing access to consumption. Economically and culturally, 1968 was the culmination of a trend that started a decade before, not its point of departure.

Another paradox is that the radical individualism of 1968—best encapsulated by the slogan “jouissez sans entrave” (“enjoy without constraint”), essentially a call for freedom without responsibility—helped open the door in Western capitalism to a more intense or compulsive consumption model. With the rejection of traditional morals and their boring emphasis on self-control and delayed gratification, individuals “had the right” to consume now—rather than save and invest. No doubt the short-termism of expansionary monetary policies and collectivized pension schemes reinforced this deformation. Those who rejected the consumer society ended up building a culture that was addicted to consumerism.

Another rupture that was probably generated by the rebellion of 1968, with its rights-based rhetoric, is the “entitlement mentality.” Welfare states had already been around for the better part of a century in the West, but this marked a new departure in socialization. Where consumer society met politics, political demands were generated for more welfare benefits, more protection, and more of a nanny state—what economist and Nobel laureate James Buchanan used to call “parentalism.”

The Threat to Democracy

The notion of a “right to be different” only exacerbated this trend, even if it would have been quite valuable when limited to mere toleration. The possibility of demanding even more rights based on real or imagined differences encouraged bargaining strategies based on victimization and communitarianism—not an atmosphere in which democracy is likely to flourish.

The irony is that this anti-conservative revolt fostered a new kind of conservatism, based on entitlements and social status. These, in turn, created labor market rigidities that increased unemployment, thus generating more demands for state protection. The entitlement mentality was made easier because the real costs of these proliferating “rights” were concealed by the fiscal illusion mechanism (where spending is financed by hidden taxes or public debt), weakening the democratic incentive for citizens to control spending.

Some see here a process of “infantilization”—the very opposite of a mature democracy. The philosopher Pascal Bruckner has identified infantilization and victimization as the two diseases of modern individualism, and they are both symptoms of weakening individual responsibility.

A decade after 1968, the rock band Pink Floyd’s famous chorus “We don’t need no education” echoed these sentiments. Criticizing the elitist educational system, with its centralized, top-down pedagogical methods and its confidence-destroying lack of trust in pupils and students, was understandable and welcome at the time. Students did not want to become “another brick in the wall.”

But where thinkers like Pierre Bourdieu saw the operations of a quasi-Marxist law (the reproduction of the bourgeois elite), the system’s real aim was to reduce social differences by elevating pupils to a common level of knowledge. Personal fulfillment certainly matters, but replacing the old system with a permissive educational supermarket meant “kneeling before individual differences,” as the philosopher Luc Ferry put it.

Making it easier to pass courses with less effort, banning homework, drastically shrinking the required reading, and more “tolerant” grading was a recipe for decline, even if the changes were made in the name of equality and respect for different abilities. It created the illusion of education while devaluing academic credentials, corrupting the minds of a generation into believing that effort does not matter. This was the surest path to destroying any incentive for self-control and personal improvement.

It also had the unintended effect of increasing inequality in education. The focus on grades rather than on the genuine acquisition of knowledge through hard work is an indirect legacy of 1968.

To cite one example, it was decided in the 1980s that 80 percent of French students should receive their “baccalaureat”—because that was the ratio in Japan. The reform was implemented by lowering the requirements to pass, rather than improving students’ performance to meet the old standard. As a result, too many of today’s university students are unable to write proper French.

In April 2018, the Parisian students who celebrated ’68 with blockades and pseudo-democratic student assemblies demanded that they all receive a minimum 10/20 or even 12/20 grade on their final exams. Here again, we find a conflation of the “entitlement mentality” with the new consumer society. The May Day demonstrations were hijacked by radical leftist, anti-capitalist “black blocs” who vandalized shops in the center of Paris to fight against “repression”—an old 1968 theme.

This is probably evidence that the 1968 revolts had a long-lasting impact on Western culture and politics, even if it did not turn into a revolution. Their emphasis on freedom was an inspiration to open up the traditional social order, but their insistence on the “right to enjoy” instilled a culture of irresponsibility that poses a genuine threat to freedom and democracy.

Between the extremes of a conservative social order, locked in traditional hierarchies, and violent, anarchist pseudo-freedom, there should exist the possibility of a peaceful society, based on openness, freedom, and responsibility. But the political response to the 1968 revolts may have undermined this prospect, through its infantilizing effect on democratic institutions.

There is still time to avoid a dystopian, technocratic version of “bread and circus,” but only if the pendulum swings back toward self-control, personal responsibility, and an empowerment of civil society.

Emmanuel Martin is the manager of the French educational project “École de la liberté.” Martin holds a doctorate in economics from the University of Aix-en-Provence in France. This article was first published by GIS Reports Online.

Emmanuel Martin
Emmanuel Martin is the manager of the French educational project “École de la liberté.” Martin holds a PhD in economics from the University of Aix-en-Provence in France. This article was first published by GIS Reports Online.
Website