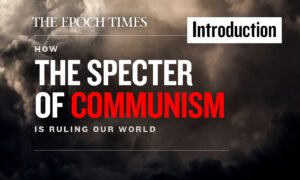 Introduction: How the Specter of Communism Is Ruling Our World (UPDATED)
0
Share Now
TelegramFacebookTweetEmailTellMeWeReddit
Copy Link 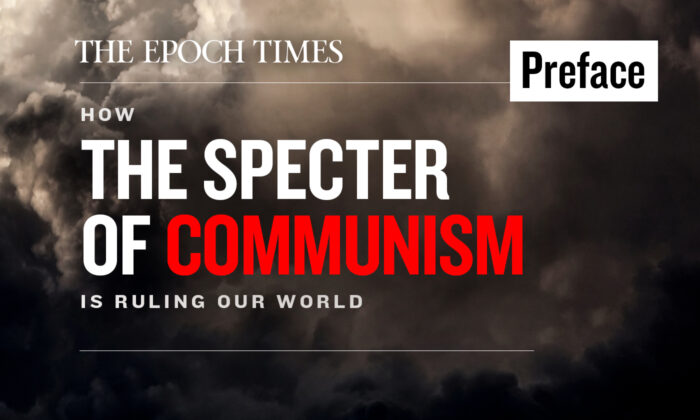 How the Specter of Communism Is Ruling Our World

Preface: How the Specter of Communism Is Ruling Our World (UPDATED)

The Epoch Times here serializes an adaptation from Chinese of the book How the Specter of Communism Is Ruling Our World, by the editorial team of Nine Commentaries on the Communist Party.

Listen to the audio book:

Though the communist regimes of Eastern Europe have disintegrated, the specter of communism has not disappeared. On the contrary, this evil specter is already ruling our world, and humanity must not harbor a mistaken sense of optimism.

Communism is neither a trend of thought, nor a doctrine, nor a failed attempt at a new way of ordering human affairs. Instead, it should be understood as a devil — an evil specter forged by hate, degeneracy, and other elemental forces in the universe.

In another dimension, not visible to us, it took the form of a serpent, then that of a red dragon, and it keeps company with Satan, who hates God. It exploits low-level beings and demons to wreak havoc on humankind. The goal of the specter is to ruin humanity. While the divine offers salvation, communism tells people not to believe in the divine, attacks human morality so as to make people abandon tradition, and causes people to disregard the divine’s instruction and, ultimately, to be destroyed.

The communist evil specter, with its countless mutations, is full of guile. Sometimes it uses slaughter and violence to destroy those who refuse to follow it. Other times, it takes recourse in the language of “science” and “progress,” offering a wonderful blueprint of the future in order to deceive people. Sometimes it presents itself as a profound field of learning and makes people believe that it is the future direction of mankind. Other times, it uses the slogans of “democracy,” “equality,” and “social justice” to infiltrate the fields of education, media, art, and law, bringing people under its banner without their awareness. At yet other times, it calls itself “socialism,” “progressivism,” “liberalism,” “neo-Marxism,” and other leftist terms.

Sometimes it holds up seemingly righteous banners such as pacifism, environmentalism, globalism, and political correctness. Other times, it supports vanguard art, sexual liberation, legalization of drugs, homosexuality, and other indulgences in human desires, giving the mistaken impression that it’s part of a popular trend.

Extremism and violence aren’t its only expressions — sometimes it pretends to care for the welfare of society. Yet its root purpose is to destroy, by whatever means, everything that is traditional, whether it be faith, religion, morality, culture, the institution of the family, art, pedagogy, or law — whatever it takes to have man fall into a moral abyss and be damned.

Communism and its various mutations are now found around the world. China and Cuba publicly proclaim themselves to be led by communist regimes. Even the United States — the leader of the free world — has fallen prey to attacks by the evil specter. Europe embraces socialism, and Africa and Latin America are enveloped in communist influence. This is the startling reality humankind now faces: The evil specter’s conspiracy to destroy humankind is on the verge of success.

Humans instinctively desire to benefit themselves and avoid danger. Instinct urges them to escape from suffering, to make a name for themselves, to establish prosperous enterprises, or merely to enjoy life. It is human to have these thoughts. However, if humans distance themselves from the divine, the evil specter can latch onto and intensify these thoughts to control them.

The hubris of the specter’s revolt against divinity also makes those it controls experience a sense of hubris. These individuals then try to play God through the wielding of power, capital, and knowledge, with the aim of ruling the fates of millions and influencing the course of history through social movements.

Humans are created by the divine and have both good and evil in their nature. If people abandon evil and choose compassion, they can return to the divine. What awaits on the opposite side is evil personified — the devil. The choice resides solely with the individual.

Many fundamentally kindhearted people have unknowingly become the communist specter’s agents or the targets of its manipulation — what Vladimir Lenin called “useful idiots.” Though society as a whole has ended up on the verge of destruction because of the specter’s inducements and temptations, very few people have willingly pledged their souls to the devil and chosen to deliberately corrupt mankind. For most, the kindness innate in human nature remains, giving them an opportunity to rid themselves of the specter’s influence.

The purpose of this book is to set out this complex and tangled issue in plain language as truthfully as possible. Then people will be able to see the communist specter’s tricks. More importantly, this book seeks to present the moral, cultural, and artistic traditions that the divine laid down for mankind. Individuals may then choose between the divine and the evil specter for themselves.

When a person’s kind thoughts emerge, the divine will help free him from the devil’s control. But the process of seeing the devil for what it is requires that one think deeply and discern clearly. This book seeks to reexamine the tides of history over the last several centuries and, from a high level and with a broad perspective, assess the multifarious masks and forms the devil has adopted in order to occupy and manipulate our world.

The goal of this effort is not to simply recount history, but to understand how we can stop the devil from ever ruling the world again. This relies on each individual’s enlightenment, proactive abandonment of evil, and return to the traditions and way of life that the divine laid down for man.

The divine will triumph over the devil. Which side we stand on will determine our eternal destiny.

Read the Series: How the Specter of Communism Is Ruling Our World