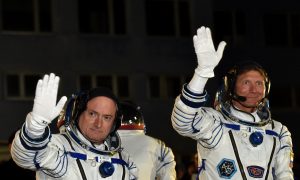 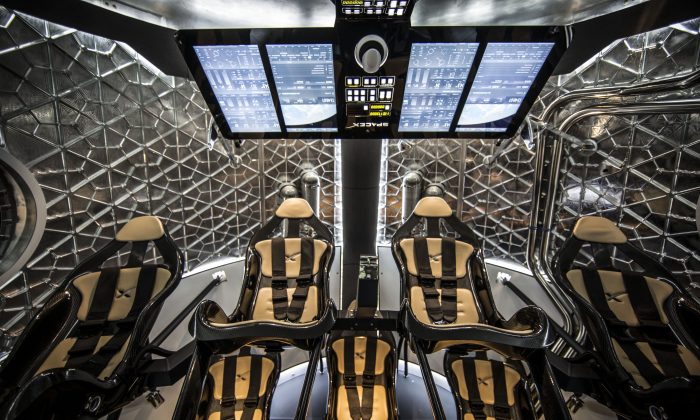 The interior of the Dragon V2 of the next generation astronaut spacecraft on May 29, 2014. (SpaceX)
Science

It’s the dawn of commercial space travel and an entire industry has spawned to service tourists who will travel to the final frontier.

There are at least seven companies in the United States in the race to transport customers into space. Plans are being drawn up for pleasure cruises, space hotels, and even a new galactic currency, PayPal Galactic, to pay your off-Earth bills.

A company called Space Adventures is the solar system’s first bespoke suborbital travel agent. Space Adventures can book you on a variety of “private spaceflight experiences to suit all interest levels and budgets,” such as a 10-day trip to the International Space Station (price subject to departure), a chance to experience a zero-G flight ($4,950 + tax), and experiencing astronaut space flight training (price depends on choice of itinerary).

Soprano superstar Sarah Brightman has been training since January to travel to the International Space Station (ISS) with Space Adventure where she will become the first artist to perform live from space.

Cosmic Lifestyle Corp. is gearing up for the first outer space happy hour with its 3-D printed, zero-gravity cocktail glass. The project is “an attempt to bridge the gap between the space tourism vision and mainstream reality,” reads the company’s website. The reality gap may be a bit too wide still, however, since its Kickstarter campaign only raised $3,430 of the hoped for $30,000.

The brains behind Cosmic Lifestyle Corp. is Samuel Coniglio, a veteran space activist and former vice president (and current board member) of the Space Tourism Society.

The Space Tourism Society was founded in 1996 with a mission to build demand and resources for make space tourism available to as many people as possible as soon as possible.

STS founder and president, John Spencer, said that while companies like SpaceX and Virgin Galactic are taking care of access and return from space, his organization focuses on what to do in space—what he calls the “space experience economy.”

He is thinking about questions like how to cook and serve a 5-star meal in space, what zero-gravity hairstyles are like, and what the entertainment should be.

John Spence is thinking about how to cook and serve a 5-star meal in space and what zero-gravity hairstyles are like.

He has big plans for suborbital skydiving, zero-gravity ballet, and space basketball, plus his longer term plan for the Great Lunar Rover Race around the moon’s circumference.

The ambitions of space tourism pioneers may sound a bit out there to a lot of people, but the reality is closer than many probably think.

“There’s a lot of quiet work going on,” said Spencer. There’s a list of 10 billionaires who are actively investing in or starting up commercial space companies, he adds.

People like Microsoft co-founder Paul Allen. He owns Stratolaunch Systems, which is designing a formidable twin-hulled jet with a 385-foot wingspan (a football field is 330 feet long) that will be able to take off from a regular airport and climb to a low Earth orbit. The $20 million price tag is a fraction of competitors.

Amazon’s Jeff Bezos recently entered the game with Blue Origin, which is working on the New Shepard passenger spaceship.

SpaceX, owned by Tesla’s Elon Musk—which is already on its sixth resupplying mission to ISS—has $5 billion in confirmed manifest orders.

There’s a list of 10 billionaires who are actively investing in or starting up commercial space companies.

To date, there have been seven space tourists. Each paid multiple millions of dollars to the Russian space program for a 7- to 10-day trip to the ISS and back (and one went twice). But the last trip was in 2009 because there hasn’t been extra space at the Space Station since then.

Spencer takes the cruise line industry as the model for space tourism. Cruise ships are similar he said, in that “they are a complex piece of equipment that takes people out to a hostile environment like the ocean” with a business model to “extract as much money as possible.”

Spencer has no doubt of the business case for off-Earth travel. The value for providers and tourists and is in the branding, social standing, and prestige, he says.

As an award-winning NASA space architect, Spencer’s personal big project is a 10-passenger plus crew orbital super yacht called Destiny. He expects it won’t be too difficult to convince a mega-corporation to buy into the prestige of owning the first space yachts.

Certainly there are risks associated with space travel. On Oct. 31, 2014, Virgin Galactic’s SpaceShip Two crashed during a test flight, killing one pilot and seriously injuring the other. But the company has recovered and SpaceShip Three will be ready for test flights likely by the end of summer.

“It is risky. That’s part of the uniqueness, the bragging rights of going to space,” said Spencer.

It is risky. That’s part of the uniqueness, the bragging rights of going to space.
— John Spencer, Space Tourism Society Founder

Aside from the possibility of crashing and a host of other emergency situations—fire, equipment failure, accidents, and so on—another long-term concern is cancer.

Spencer said this isn’t a significant concern at the moment, since the risk to one-time space travelers isn’t great, but it will become a greater concern later as crew members spend more time in space.

“Onboard my super yacht, I have the crew quarters in the most shielded area … so the crew members are getting the least radiation,” said Spencer.

Although it’s an issue, he feels it’s not a show stopper and there are a lot of clever people working on it.

“As far as I know, I’ve never heard of anyone with real credibility say we can’t do space because it’s too dangerous,” he said.