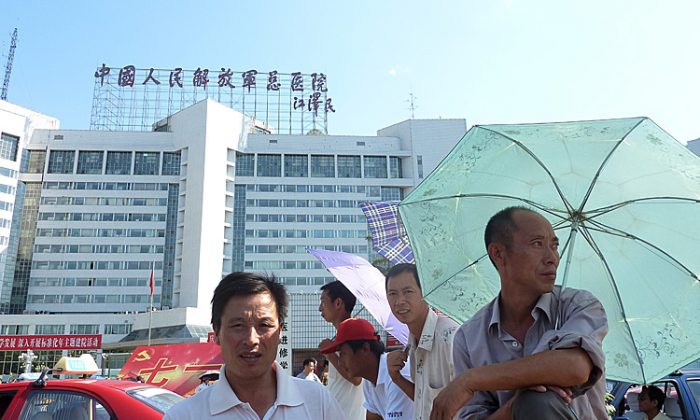 A Hospital for the Communist Party Hides Dark Secrets

The 301 Military Hospital in Beijing is understood to be the medical facility where many high-ranking members of the Chinese Communist Party (CCP) have been treated. It has also been used to dispose of, or “treat” political rivals, and therefore its true history likely contains many secrets.

Former leader Deng Xiaoping, former president Li Xiannian, and one of the “eight elders,” Wang Zhen, are known to have received treatment at the 301 Military Hospital, which is formally known as the Chinese People’s Liberation Army General Hospital.

The hospital received the “301” moniker because it used to serve as a school before the Central Committee and Central Military Committee decided to turn it into a hospital in 1957, and the old name stuck. There is another hospital for high-level officials, the 305 Hospital, where former leader Mao Zedong is said to have received treatment, according to Wang Juntao, the former editor of the banned Economic Studies Weekly.

The “South Building” portion of the facility is the most heavily guarded area, according to a China News Week report published earlier this week. To enter or exit the building requires special permits, all doors are under heavy security, and three guards constantly patrol the perimeter. The report said the CCP’s Central Committee members receive medical treatments there.

Li Yantang, a doctor at the 301 Hospital, recalled that former leader Deng Xiaoping underwent surgery in the South Building in 1976. To preserve the secrecy of Deng’s operation, the entire fifth floor of the building was emptied, and a private office, meeting rooms, and a private elevator were made available exclusively to him.

Ren Baiming, a Chinese social commentator, told NTD Television in an interview that many members of the CCP’s leadership group have sent their political rivals to the 301 Hospital during times of internal struggle.

“This means [the opponents] are under the complete control of their political rivals,” Ren said. He hinted that some of these officials have died after being “treated” at the hospital.

For example, former Chinese President Yang Shangkun was sent to the medical facility with a common cold, but died shortly after, said Ren. At the time, Zeng Qinghong was the Chairman of the Central Office.

In a book, Anything for Power: The Real Story of China’s Jiang Zemin, it said that after “Deng Xiaoping died in February 1997, 92-year-old former President Yang Shangkun was in good health. But Yang disapproved of Jiang Zemin (who became the head of the CCP) randomly promoting new generals, bribing people, and punishing people.”

“Yang often criticized Jiang during meetings with military officials” and in 1998, he told Jiang that if he continues, “the military will be ruined,” according to the book.

Ren said Jiang “wanted to crush Yang and his family,” and therefore “the healthy Yang was sent to the 301 Hospital to be treated for a cold and died soon after.”

“It was widely suspected that [Yang’s] death was ordered by Jiang Zemin,” said Ren.

Ren contends that after Yang’s death in 1998, many former high-ranking CCP officials became afraid of the 301 Hospital. He said that even Jiang Zemin himself was afraid of being treated at the hospital after Hu Jintao assumed control over the country.

“[Jiang] won’t go there unless he absolutely has to. He always goes to a hospital in Shanghai for treatment,” Ren said.

Reports suggest that after Wang Lijun, the former top cop in Chongqing under Bo Xilai, attempted to seek political asylum at a U.S. consulate in Chengdu, he received psychiatric treatment at the 301 Hospital.

China News Week reported that the 301 Hospital is also a place where high-ranking CCP officials conspire against one another. High-level politician Wang Zhen visited the hospital to communicate with Deng Xiaoping and Chen Yun, another influential leader, to plot the overthrowing of the “Gang of Four,” which rose to prominence during the latter stages of the Cultural Revolution in the 1970s.