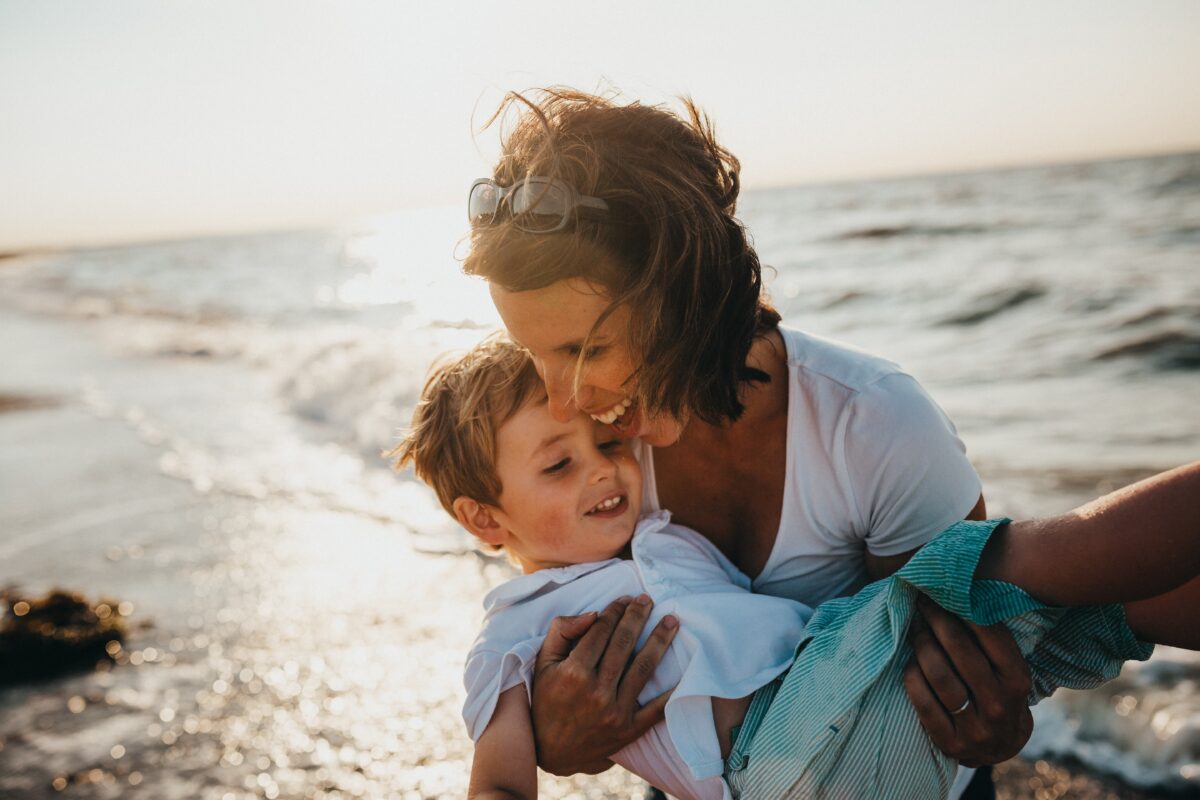 Long-term happiness boils down to having and maintaining high quality relationships. (xavier mouton photographie/Unsplash)
Free to use

The Single Most Important Factor in Leading a Happy, Fulfilling Life—According to Science

A cluttered life can make it hard to focus on what really matters
BY Jay Harrington TIMEJanuary 23, 2022 PRINT

Working out at the gym got a lot easier the day I realized the sweat served a higher purpose. I’m 43, and have three kids under 8 years old, so if I want to be around—healthy and active—for my grandchildren, I better put the work in now or face regret later.

Activities that aren’t inherently joyful, like clocking time on a treadmill, get better when done in service of something bigger.

The same can be said of cleaning out one’s closet. Satisfying, yes, but the buzz is too fleeting to be self-sustaining. It’s only when decluttering is reframed as a piece of a larger, more significant puzzle that it sticks.

Without a bigger picture in mind, our actions are often dictated by “What’s more pleasurable in the moment?” rather than “What’s better in the long-term?” In the moment, the consequences of most choices are insignificant. It makes little difference, on a particular day, if you opt to stay on the couch rather than hitting the gym, but over the course of a year, the negative results from this repeated decision will compound.

An intentional life is one marked by long-term thinking that leads to beneficial short-term decision-making. First, decide what you want. Then, decide—every day, in ways big and small—how to get there. Have the ends in mind, and the means will become clear.

Determining the ends, however, is not always easy.

What makes Netflix so appealing—the quantity of programming—also makes it hard to decide what show to watch. The same quandary applies to life, but the stakes are obviously far greater. There are countless ways to live, values to prioritize, and experiences to optimize. However, because there’s no clear path to follow despite the abundance of options, it’s easy to bounce aimlessly through life like a tumbleweed.

One of the best ways to live a fulfilling, intentional life, and direct one’s actions toward a beneficial end, is to adopt an “ism” operating system. Some “isms,” such as materialism and consumerism, have proven to be harmful and should be avoided. Others, such as minimalism, lead to smart decision-making, contentment, and happiness.

Years ago, when I first stumbled across the notion of minimalism, I bought into the idea that a life with less could lead to more. Like many, I began my journey by eliminating the low hanging fruit of plentiful and obvious excesses from my life. Over time, despite how satisfying purging could be, I came to realize that minimalism is not an end in itself. The process of decluttering, detaching, and de-emphasizing materialism is simply a step on the road toward something more significant. Minimalism is a mechanism to create space and time for what really matters.

The Real Secret to Happiness

For thousands of years, people have grappled with the big question of “What really matters?” What, among the many alternative ways we can choose to spend our finite time, will bring us happiness?

Recently, another batch of smart people have attempted to answer these eternal questions, and their conclusion reinforces something that most of us intuit.

According to Harvard’s Grant and Glueck Study, which tracked more than 700 participants over the course of 75 years, the key to long-term happiness and fulfillment comes down to a single factor: the quality of our relationships.

The root of happiness is not money, fame, or good looks—it’s the people we choose to surround ourselves with and how well we nurture our relationships with them.

Robert Waldinger, director of the Harvard Study of Adult Development, explained that: “The clearest message that we get from this 75-year study is this: Good relationships keep us happier and healthier. Period.”

As with most things in life, when it comes to building good relationships, quality is more important than quantity. Indeed, practicing minimalism is as important in curating relationships as it is in decluttering a closet.

In the 1990s, British anthropologist and researcher Robin Dunbar determined that we are only capable of having a finite number of people in our social sphere—150 at most—due to the size of our brains. Any more, and it becomes impossible to manage one’s social network. This theory is known as “Dunbar’s Number.”

Dunbar went on to conclude that while we can form, at most, 150 loose relationships, we only have the capacity to form close, meaningful relationships with approximately five individuals.

The takeaways from the Grant and Glueck Study, and Robin Dunbar’s research are both hopeful and daunting. Hopeful in the sense that our capacity to lead happy, fulfilling lives rests on our capacity to forge close bonds with merely five individuals. Daunting in that most can appreciate the challenge posed by nurturing just one close relationship over a lifetime.

Nonetheless, despite how hard it may be, the reward is worth it. As Booker T. Washington once said, “Nothing ever comes to one, that is worth having, except as a result of hard work.”

The Payoff From Positive Relationships

The benefits of having close, healthy relationships with members of one’s immediate family are self-evident. A safe, secure, and loving family results in happy, independent children and parents who derive the satisfaction of having completed a job well done. The payoff from social and professional relationships may be less obvious, but are no less important. Consider the following historical examples of people leveraging close relationships into meaningful success:

In the 1920s, Ernest Hemingway moved to Paris to join a group of expatriate, “Lost Generation” writers, including Gertrude Stein and F. Scott Fitzgerald, who had taken up residence in the Left Bank. They hung out at cafes, argued about politics, caroused late into the nights on the streets of Paris, and produced some of the greatest works of literature of the 20th Century.

In the 1970s, young and brash directors Francis Coppola, Martin Scorsese, Steven Spielberg, George Lucas, and Brian De Palma, known as the “Movie Brats,” took Hollywood by storm. They competed, collaborated, shared resources, worked on each other’s films, gave critical feedback, and formed friendships. They transformed an industry because of, not despite, one another.

A “tribe” of inspiring and supportive people can lift you up, hold you accountable, and inspire you to live to your greatest potential. As motivational speaker Jim Rohn famously observed, we are the average of the five people we spend the most time with. So choose wisely.

Implicit in this principle, of course, is the fact that it works both ways. If you fail to choose wisely, and surround yourself with people who exhibit behaviors and habits that are inconsistent with your own desires, you’ll have a hard time bucking the group’s standards—as unappealing as they may be.

For example, if you desire to lead a healthy and active lifestyle, you’ll be hard pressed to do so if your inner circle consists of couch potato friends who spend their days playing video games and eating junk food. On the other hand, if your friends are physically fit you stand a much greater chance of being fit yourself because the cultural norms of your group will influence your own behavior. Who you spend the most time with is who you are.

Find the Tribe that’s Right for You

Our instincts to fit in have ancient roots. For thousands of years, humans have lived in tribes in which it was essential to conform. To buck the tribe was to be shunned or cast out altogether, leading to great hardship. Modern culture is different, but from fraternities and sororities to sports teams and social groups, tribes still exist and still enforce social norms.

In this environment, faced with the expectations of a tribe, you have a few options: (1) conform to the rules of the tribe, (2) resist, or (3) find a new one.

There’s nothing inherently wrong with conforming to a tribe’s social norms—as long as those norms align with your own desires. If you’re living out of alignment with your desired values, and those around you are exemplifying the lifestyle you want to live, then the quickest way to get what you want is to surrender to the group’s standards. But often the opposite is true—you want something different than what the group demands. In this scenario, surrendering to the group is sacrificing the life you desire.

Another option is to resist the group, but this path is perilous. It’s hard enough to change one’s own thoughts and behaviors. Why take on the nearly impossible task of trying to change someone else’s?

The third way is to practice relationship minimalism, which is not always the path of least resistance but is certainly the path of greatest benefit. Most people enter into relationships too haphazardly or maintain existing ones by default. They rely on proximity or convenience to guide relationship decision-making, or are gripped by the inertia of the status quo.

Finding the tribe that’s right for you is not always easy. It requires careful consideration. Often it means making difficult decisions to part ways with those who don’t align with your values. But isn’t the payoff of lifelong happiness and fulfillment worth it?

There are people out there who can bring real joy to your life, who you can share meaningful experiences with, and who will be there to lift you up when you need it. Cultivate a group of friends in which your desired behavior is the normal behavior. Surround yourself with people who are leading lives you want to live.

First, use minimalism to shed the extraneous excesses that clutter your home and your mind. Cast aside harmful “isms” that are detracting, not adding, value to your life and the lives of those around you. This will create the space and time necessary to tackle life’s more important issues.

Second, leverage your newfound mental bandwidth to think deeply about how you want to live your life. How do you want to spend your time? What makes you happy? What kind of person do you want to be?

Third, make the hard decisions necessary to part ways with toxic people in your life, and scale back ambivalent relationships to make room for new, better-aligned ones.

Fourth, find people who exemplify the values and lifestyles you aspire to. Clusters of such people may already have found each other and formed groups—from book clubs to biking groups—centered around the activities and experiences that are consistent with your desires. Begin to engage.

Fifth, take frequent, consistent steps to strengthen budding relationships with members of your newfound tribe. Show up. Give back. Express gratitude. Let your guard down. Be generous. Find your people, then never take them for granted. You’ll become a transformed and better person when you surround yourself with people who push, prod, and encourage you to reach new heights.

Give of yourself to others who inspire you and a delightful thing will happen: you’ll get so much more than you could ever imagine in return.

This story originally published on Life and Whim.

Jay Harrington
Follow
Jay Harrington is an author and lawyer-turned-entrepreneur who runs a northern Michigan-inspired lifestyle brand called Life and Whim. He lives with his wife and three young girls in a small town and writes about living a purposeful, outdoor-oriented life.
SHARE
Friends Read FreeCopyFacebookTweet
You May Also Like