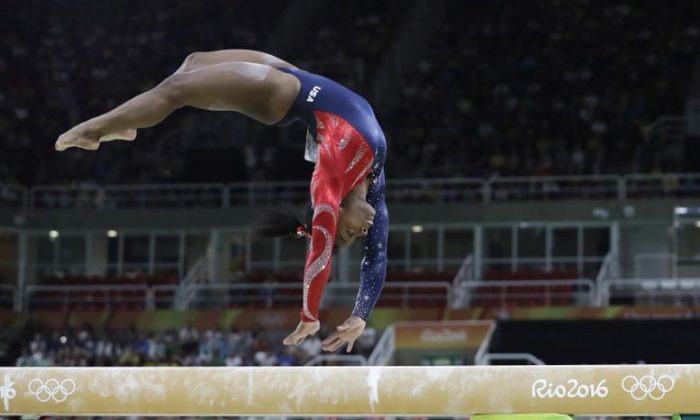 Amid NBC announcer Al Trautwig’s comments about American gymnast Simone Biles’s adoptive parents, some viewers might be curious about the family of the Olympian who has been described as the “best gymnast in history.”

Biles, 19, is the most-decorated gymnast for Team U.S.A., and is the most decorated gold medalist in world championship gymnastics history. According to NBC Olympics, she is on pace to nab as many as five medals at the games.

Dear @nytimes,
This piece of journalism is majestic. Thank you. https://t.co/rFrmppvE94 pic.twitter.com/1wYExqSXg1

On Aug. 7, she posted a near-perfect 16.050 score during her vault routine in the qualification rounds.

With an Eye-Popping Score, American Gymnasts Put World on Notice

“I think everyone out there, we all performed how we trained, and that’s all very special—something we have to keep for team finals and any event finals that we qualified for,” Biles said, according to CNN.


It’s been widely documented that her grandfather, Ron Biles, and his wife, Nellie Biles, adopted Simone and her sister when their biological mother was deemed unfit to raise them. As the Texas Monthly reported:

Biles was born in Columbus, Ohio, in 1997 to drug-addicted parents who struggled to care for their children. Biles and her three siblings were shuffled back and forth between their mother’s house and a foster home. (Biles’s father had abandoned her mother and was never present in his daughter’s life.) When I asked her what memories she has from those days, Biles recalled that one of the foster homes had a trampoline that she and her siblings weren’t allowed to play on.

When Biles was six, she and her younger sister, Adria, were adopted by their maternal grandfather, Ron, and his second wife, Nellie, who brought them to live in their house in Spring, a prosperous suburb of 55,000 people half an hour’s drive north of Houston.

10 US Athletes to Watch at the Rio Olympics

Her sisters at the time called Nellie and Ron “Grandma” and “Grandpa,” respectively, but Nellie wanted to clarify.

“She said, ‘It’s up to you guys. If you want to, you can call us Mom and Dad,’ ” Simone remembered. “I went upstairs and tried practicing it in the mirror—’Mom, Dad, Mom, Dad.’ Then I went downstairs, and she was in the kitchen. I looked up at her and I was like, ‘Mom?’ She said, ‘Yes!’ ”

On Monday, Trautwig apologized for his comments about Biles’s parents. “I regret that I wasn’t more clear in my wording on the air,” he told USA Today in a statement. “I compounded the error on Twitter, which I quickly corrected. To set the record straight, Ron and Nellie are Simone’s parents.”

Biles got her start at the age of six when she went to a gymnastic center during a field trip.

always have your gameface on

At the time, the coach noticed she had innate talent.

And a few years ago, former gold medalist Mary Lou Retton said Biles “may be the most talented gymnast I’ve ever seen in my life.”