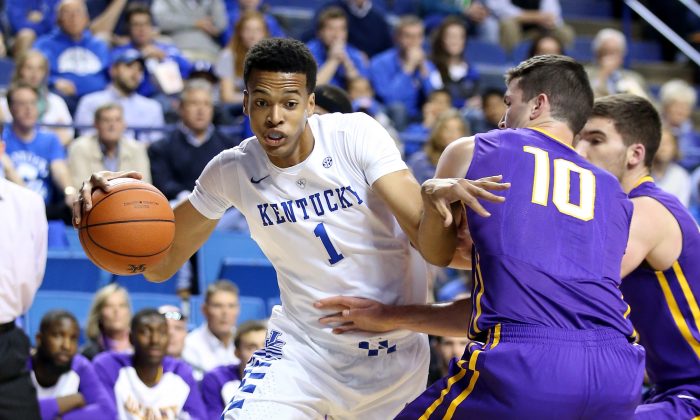 Five-star center Skal Labissiere (L) of the Kentucky Wildcats might be in the pros right now, if not for the NBA's minimum age requirement. (Andy Lyons/Getty Images)
College Sports

The Silliness That Is the NBA’s Age Minimum

Although these programs annually bring in the best recruiting classes—save for the Spartans who do well with veteran teams—their rosters are usually bottom heavy with freshman stars.

Take last year’s event as an example. Between the four juggernauts, eight players left after just one season—seven were selected in the top 24 picks of last June’s NBA Draft. (Cliff Alexander of Kansas left after one year but went un-drafted, though he’s caught on with Portland.)

Currently, two of these youngsters are already shining in the pros. First overall pick Karl-Anthony Towns is averaging a double-double for Minnesota while Jahlil Okafor is putting up 19.2 points a night for Philadelphia.

It’s not a stretch to think that these two big men could have made an impact last year as well—straight out of high school. But of course, the NBA doesn’t allow players to enter the draft until they’re 19 years old—a rule instituted ahead of the 2006 draft.

So why the change?

After the likes of Garnett and Bryant, numerous high schoolers thought they could do the same.

Of course not all NBA teams knew that and not wanting to miss out on the next big thing, a number of them were drafted, went nowhere, and have since flamed out of the league as unsuccessful millionaires.

In essence, the 2006 rule change turned the NCAA into the NBA’s free minor league system. Now teams have an extra year to evaluate a player and can see if they hold their own at a level between high school and the pros.

The NCAA, as an institution, probably doesn’t mind all the star players coming through—even if they’re gone before they’re sophomores—because hey, they attract more fans.

But what about the coaches and the players themselves?

The problem it causes for guys like Kentucky’s John Calipari, or Duke’s Mike Krzyzewski, or Kansas’s Bill Self, or even Michigan State’s Tom Izzo is that it makes for unpredictable rosters from year to year. Losing their most talented player(s) after just one season, year after year, puts a lot of stress on them to continually replace them.

Look at Kentucky. Although Calipari, who’s the king of getting these one-and-done players into his program, is adept at doing so, it hasn’t been without its faults.

The master recruiter/motivator was able to lead the Wildcats to the 2012 national title and then lost a majority of his rotation to the NBA—including three one-and-done players.

The next year he reloaded with a team headlined by freshman sensation Nerlens Noel, but Noel was lost for the year mid-way through the season and Kentucky didn’t have enough talent around him to recover. Subsequently, the team not only missed out on the NCAA tournament they ended up losing in the NIT opening round.

For the players themselves the rules leave them little choice but to attend college for a year, which isn’t the worst thing in the world but that doesn’t mean it’s for everyone. What if they suffer a catastrophic injury during that one year and their hopes of an NBA career are dashed? Then what?

Curiously enough, the NCAA and Major League Baseball have had the right idea all these years. You either enter the MLB draft straight out of high school and start your professional career right away or you go to college. But if you do go to a four-year college you have to complete three years before entering the draft again—unless you turn 21 before that time.

So while the NBA rules aren’t likely to change anytime soon, college basketball and its biggest events—like the Champions Classic—will continue to showcase some of the country’s best basketball talent. It just won’t include the same players as last year.