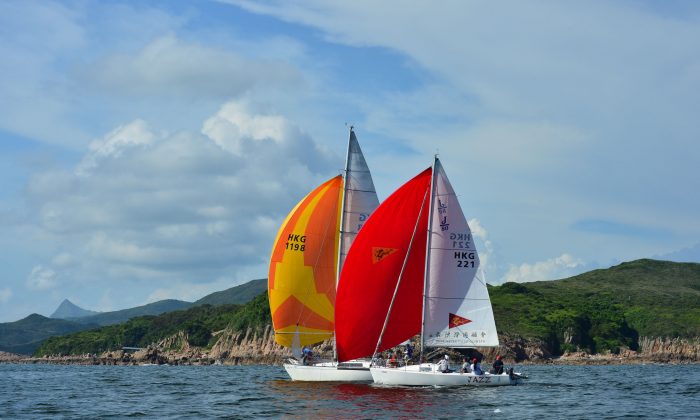 “The Short Course Dash” an Islands race of up to 10 miles, which took place on Saturday July 12, is a new addition to the Hebe Haven Summer Saturday Series and is also a “stand alone race” with its own prizes.

Forty boats assembled for the day’s races, but the 8-Dragon boats, due to safety restrictions, had their own geometric course laid within the confines of Port Shelter.

The weather, except for the odd shower was glorious and the 12 knot wind was perfect for the afternoon racing.

IRC
Talkinghead was one of the first boats to cross the start line, but Signal 8 and Stella crossed the line together in a more leisurely start.

But this was a 10-mile race with plenty of opportunities to make up ground and Signal 8 was well in the lead as she made her way round Bluff Island heading for the Bay Island Mark and then towards home. The red spinnaker of Stella was next to appear round the northern edge of Bluff Island followed by a similarly bright red Jenny of Lighthorse. The white sail of Talkinghead appeared next.

Signal 8 completed the course in just over 1½ hours to take Line Honours and first place on corrected time for the IRC boats for Race-5. Talkinghead, Taxi, Stella finished in 2nd to 4th places respectively. In series terms Talkinghead leads with 10-Points followed by Impalas Taxi on 16 and Moll on 19.

Sport Boats
At the IRC/Sports Boat Start there was much shouting between the crews as boats made their run close to the stern of the Committee Boat. Merlin got squeezed out by Fly By Wire and aborted her run, diving sharp right, just before reaching the Committee Boat. Merlin made a quick turn and set off again but she was some 50 yards behind Fly By Wire and Black Magic was also ahead.

Steve Bourne in Merlin said he was not upset with what happened: “I have done that many times to Frank [van Kempen] so it made me laugh. Actually, “It is nice to see Frank back in the Magics,” he continued.

By the time the boats had rounded Bluff Island and were heading for the Bay Island Mark Merlin had caught and overtaken Black Magic and Fly By Wire and was only just behind IRC contender Talkinghead. At that time Good Vibrations was in a battle with Fly By Wire and FreeFire It’s My Pleasure was a little further behind. But Black Magic had lost a lot of ground.

Merlin went on to secure the win and Good Vibrations did well to get the better of Fly By Wire down the final stretch. This puts Merlin at the top of the series standings after 5-Races with 9-Points. FreeFire It’s My Pleasure is lying in 2nd place on 12-Points and Good Vibrations is 3rd on15-points.

HKPN
At the HKPN start the Helly Hansen J80 boat Jive timed her run perfectly to cross the start line first ahead of Bits & Pieces and Tara.

But the first HKPN Boat to appear round Bluff Island was Kiasu with Bits & Pieces second, then there was a long string of HKPN contenders.

Kiasu went on to take Line Honours and 4th place on Corrected Time but Tara took the win followed by Windseeker and X-Terminator. Windseeker heads the series Standings with 12-Points, Kiasu is 2nd on 21-Points and Tara is 3rd on 22-Points.

Dragons
In the Dragons geometric race, Zephyr continued her good form to take the win almost a minute ahead of Phyloong with Eaux Vives in 3rd place. Zephyr now has an impressive successive 4-Race win record to head the Dragon Series with 7-Points ahead of Eaux Vives on 12 Points and Maiden Hong Kong on 18 Points.

Next Race
The Hebe Haven Typhoon Series continues this coming Sunday July 20 with two geometric races outside of Port Shelter.