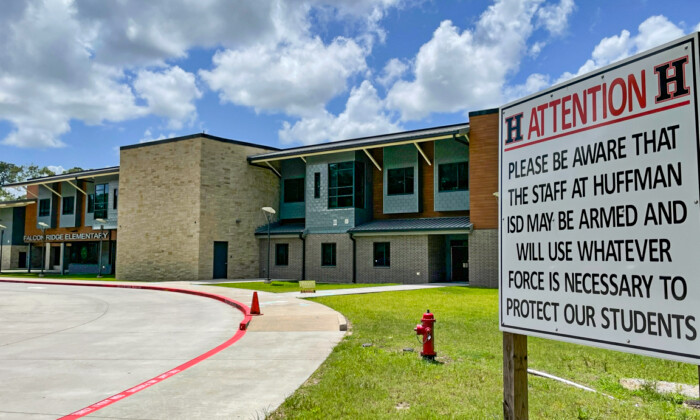 The Shooting in Uvalde: Would a School Marshal Program Have Made a Difference?

In the wake of the tragic school shooting in Uvalde, Texas, on May 24, one question begs for an answer: Would a School Marshal Program have made a difference?

After the shooting in Uvalde, in which 18-year-old Salvador Ramos shot and killed 19 children and two adults at Robb Elementary School, Texas Attorney General Ken Paxton suggested arming teachers, a strategy that’s already been in place for years in another Texas school district.

Huffman Independent School District (ISD) in Huffman, Texas, has been training staff members as armed School Marshals for the past four years under a 2013 state provision, which allows school employees to be armed and trained through the state’s School Marshal Program to respond to threats against students and staff.

After applying with the Texas Commission on Law Enforcement (TCOLE) to enter the School Marshal program, school districts must send their participating staff members to an 80-hour TCOLE training course where they learn about physical security, improving the security of the campus, use of force, active shooter response, and weapon proficiency.

Through information gathered in interviews with the Superintendent and Chief of Police for the Huffman ISD and the Deputy Chief of TCOLE by The Epoch Times, it appears that things may have turned out differently had the Uvalde Consolidated Independent School District implemented a similar program.

“It’s an incredibly tragic incident that took place in Uvalde,” Huffman ISD Superintendent of Schools Benny Soileau told The Epoch Times. “Our hearts and prayers go out to those individuals, everybody who is suffering in that particular incident. Reflecting on the happening in Uvalde, we know there is a lot we can learn from things that were done right and things that could have been handled better and we want to make sure that we’re trying to glean everything we possibly can from that incident and create a safer environment for our children.”

According to reports from the May 24 shooting, police waited outside for an hour for backup as terrified children called 911 begging for help. One girl called five times. A Uvalde official said he had “no idea” where the school resource officer was.

Soileau said he didn’t want to pass judgment on the response of the Uvalde Police Department or school police officers without a full picture of what happened, especially while there’s an ongoing investigation.

According to Soileau, the School Marshal Program was instituted at Huffman ISD after a shooting that occurred in the Houston area almost four years to the day before the Uvalde shooting.

On May 18, 2018, 17-year-old Dimitrios Pagourtzis allegedly walked into Santa Fe High School in Texas, armed with his father’s Remington 870 shotgun and a .38-caliber revolver, and opened fire in a first period art class. Eight students and two teachers were killed, and 13 others were wounded. A judge declared Pagourtzis was incompetent to stand trial, and he was committed to a state mental health facility.

Soileau explained that after the Santa Fe shooting, Huffman ISD officials put together a focus group with community members who talked about all of the possibilities they could implement to make their schools safer. After much discussion, and some occasionally heated debate, the decision was made to pursue the School Marshal Program because it involved in-depth, professional training from the Texas Commission on Law Enforcement (TCOLE).

According to Antu, School Marshals are “armed employees of the school district” who “have police authority” to “intervene” and “cause serious bodily injury or death” in order to neutralize a threat.

According to a 2018 report by Education News, over 170 school districts across the state of Texas have implemented the School Marshal Program. While some who oppose the Marshal Program have claimed that it’s ineffective, Antu told The Epoch Times “there have not been any recorded incidents in those school districts.”

While Antu conceded it’s impossible to say that having an armed Marshal present at Robb Elementary School could have prevented all casualties, he did say that “having armed individuals readily accessible will always help” in those situations.

Having personally been involved in some of the training classes, Antu said he is impressed by the level of courage he sees displayed by the people who are part of this program.

“To see the drive and commitment that these educators have for not only their students but the other staff, what they are able to bring is something that not a lot of people are willing to do,” Antu expounded. “These folks have stepped up.” While he conceded “you can never train for a real-life scenario,” Antu said “they take it very seriously.”

While most people have handled firearms before, Antu explained that the act of using a firearm to clear a building you walk through every day, or to secure a room you would normally just walk into, causes people to see their everyday world from a different perspective. Teachers who have gone through the program look at their classrooms differently. They become more cognizant of using different layouts for their classrooms to allow for a better view of doors and windows, opportunities for an attacker to enter or for students to use to escape.

“Your body can’t go where your mind hasn’t been, so it’s definitely something that exposes them and prepares them for an unfortunate day if it happens to come and they have to respond,” Antu said.

They have also had people go through the training and decided it isn’t something they were comfortable with.

“We tell them in that training that they may be exposed to some things that might make them uncomfortable, and that’s okay,” Antu said.

As Soileau explained, the School Marshal Program provides guidance from a legal perspective as to what things they “could do well and things that would be challenge moving forward.” He added that the “strict training regimen has paid dividends” for the district in regards to their knowledge of what their rights and responsibilities are in a shooting situation.

“That responsibility, of course, is to neutralize that threat as quickly as possible,” Soileau said. However, this is considered the “back end” of the training, which Soileau said is not their primary focus.

“Our primary focus is on prevention,” he asserted, “and the front end of the Marshal Program is, we think, the most valuable piece, because we want to focus on prevention and never getting to the point where we have to activate our Marshals.”

At every school in the Huffman ISD, there are signs bearing a warning to anyone who comes on school property with ill intent that staff may be armed and will use whatever force is necessary to protect the students in their charge.

One of the front-end pieces of the Marshal Program is the counseling and social worker program.

The social workers aspect is designed specifically to treat social and emotional issues of both staff and students. Huffman ISD currently has two social workers trained to participate in the program. There are also interns gaining certification through participating colleges.

“Those individuals visit with students and staff who may be experiencing issues in an effort to make sure we are doing everything we can from a preventative measure to avoid ever having to deal with one of these tragic incidents like Uvalde is dealing with,” Soileau said. “The fact of the matter is we never want to have to create a reactive program only. We want a multi-faceted, multi-layered program that addresses this complex issue at every angle.”

Asked if Huffman ISD had ever experienced any incidents, Soileau said they “have had concerns,” explaining that “a few years back a young man brought a firearm to school in a backpack.”

According to a May 21, 2018, report, just days after the shooting at Santa Fe High School, a student at Hargrave High School in the Huffman ISD was arrested after he was caught with a gun in his backpack. The tip had come from a fellow student. A separate report on the same day said a student at League City Intermediate School in the Clear Creek ISD had also been arrested for bringing a gun to school.

“It is unclear what his intentions were, but the response was swift and immediate by campus administration and we were able to secure that weapon within minutes at the campus level,” Soileau said, explaining that the incident wound up being “a nonissue” because it proved they “have the capacity to neutralize these situations and address these concerns as they arise.”

Chief of Police David Williams for the Huffman ISD said, “when you think about our security program here in Huffman, you can think about layers of security.”

“On that very outer perimeter, as Dr. Soileau alluded to, is our counseling services that try to identify and interdict those individuals who may need help, and maybe we can divert them from the criminal justice system and get them the resources and help they need so they don’t become a threat in the first place,” Williams told The Epoch Times. “Along with that is the very important concept that everyone here is part of the security process: students, staff, administration and parents. Everyone has a responsibility that if you see something, say something.”

As part of their layered security program, Williams said they also monitor social media, “the old fashioned way by going through and reading posts.” But they hope to incorporate technology in the near future that will make that effort more efficient. “We also use technology as a force multiplier,” Williams added, “camera systems, access control systems, access control profiles, along with hardening the facility through construction redesign for security purposes.”

In the wake of the Uvalde tragedy, Bosque County Sheriff Trace Hendricks is actively advocating for all school districts within Bosque County, Texas, to implement the School Marshal Program.

In Ohio, Republican state legislators have presented House Bill 639, otherwise known as the Student Protection Act. If passed, this would require freshmen in public and private high schools to take a self-defense class, conducted by a school resource officer or a certified self-defense instructor, in order to graduate. The legislation would go into effect in the 2023–2024 school year.

In Florida, 45 of the state’s 67 county school districts have implemented some form of armed guardian program. Many of these were instituted in the aftermath of the 2018 shooting at Marjory Stoneman Douglas High School in Parkland, Florida, in which 17 people were killed and more than a dozen others were injured.

Soileau said they have had multiple teams go through the training with TCOLE and the instructors are “really adept at what they do.” He described how some components in the program are related to the law and what the limitations are in regards to being a Marshal and what their actual charge is as a Marshal. There is a classroom piece with bookwork and then there is the field training.

“This is a week-long training,” Soileau explained, adding that during the week-long training, participants work intensely with munitions through various scenarios designed to “ramp up the adrenaline and all of the emotions that come along with those types of situations.” Participants also spend time at the range shooting, learning about gun safety and how to maintain their weapon. However, even after the participants pass the class, Soileau said the training with their Marshals “is ongoing, even after they are licensed through TCOLE.”

“There are too many times, unfortunately, when we go back and retrospectively look at incidents like what happened out in Uvalde. We can see there were missed opportunities [to] intercede and get folks the help that they need, and that’s part of the program,” Williams said. “By the time you get to the police responding reactively or to the Marshals having to respond reactively, we hope to have deployed enough layers of this security that we interdict the problem in the first place.”