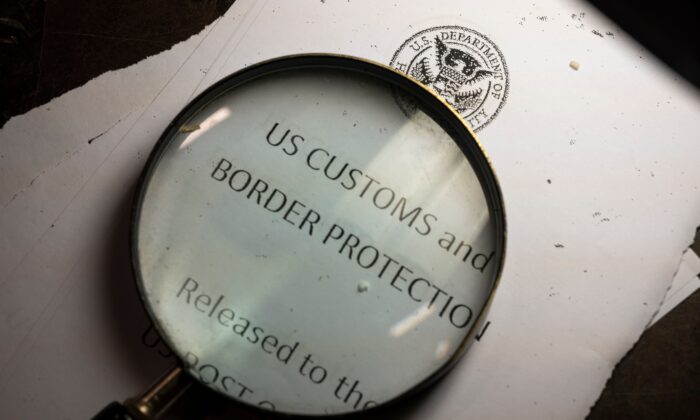 A magnifying glass is seen next to a logo of the Customs and Border Protection, Trade and Cargo Division at John F. Kennedy International Airport's U.S. Postal Service facility in New York on June 24, 2019. (Johannes Eisele/AFP via Getty Images)
Viewpoints

The Shameful Tragedy of Open Borders

As this column has previously noted, CBP data evinced as early as last October that border apprehensions were skyrocketing in anticipation of a possible Joe Biden presidential victory. By the lame-duck period of the Trump presidency, U.S.-bound migrant “caravans” were already forming in Central America’s troubled Northern Triangle region. But what was at that time a developing issue has now predictably metastasized into the first full-blown—and entirely self-inflicted—political disaster of the young Biden presidency.

Immigration policy analysts frequently speak of “magnets”—rhetoric and policies, that is, that tend to incentivize vulnerable or opportunistic migrants to partner up with rapacious cartels and transnational human trafficking rings to illegally enter the United States. The biggest illegal immigration magnets of all are amnesty proposals that would provide illegal aliens presently in the United States with a “pathway” to permanent legal status or citizenship.

But there are innumerable other magnets—among them, presidential campaign-era rhetoric promising lax law enforcement and affirmative post-inauguration policies, such as the Biden administration’s lamentable nixing of President Donald Trump’s highly effective “Remain in Mexico” policy and his return of the Obama-era “catch-and-release” practice, wherein aliens at the border are expeditiously processed and released into the nation’s interior while awaiting their immigration hearings, often never to be heard from again.

The upshot of the illegal immigration magnet is that migrants rationally respond to incentives. This is hardly an earth-shattering revelation; indeed, it is the central tenet of “homo economicus,” the dismal science’s fictitious conception of the perfectly rational, incentive-driven human that pervades neoclassical economic modeling.

But illegal immigration—let alone the extraordinarily high volume of illegal immigration now transpiring—is not an abstract or academic concept. Yes, policies such as amnesty and catch-and-release are fundamentally unjust, insofar as they deprive U.S. citizens of agency over the most consequential decisions that citizens in a free republic are ever asked to contemplate: who else to admit into the body politic. And the very notion of sovereignty is undermined and rendered unintelligible. But there are also tangible, sweeping harms from widespread illegal immigration affecting all relevant stakeholders. Democrats who wish to downplay those harms for the sake of boosting intersectional street cred with their “woke” base are doing no one any favors.

The open borders agenda massively empowers and enriches the smuggling rings that the media typically refer to as the “drug cartels,” but which are better understood as barbarous transnational criminal syndicates that sometimes even sync up with Chinese fentanyl exporters and internationally recognized terrorist outfits, such as Hezbollah. These are some of the most vicious organizations in the Western world and, as even The New York Times reported in 2019, are known for widespread raping and sexual violence committed against female migrants. Ranchers along the often-barren high deserts of Texas, New Mexico, and Arizona are imminently endangered by the cartels’ depredations in their own (literal) backyards.

Blue-collar workers of all races and backgrounds are hurt by an uncontrollable deluge of cheap, low-wage migrants who lack labor market bargaining power for the simple reason that they are not here legally. Pro-immigration enforcement states are perversely penalized in the U.S. Census—at least under the erroneous prevailing practice, which Trump sought to change, of counting both legal and illegal aliens—when they lose congressional representation to “sanctuary city”—enabling blue states that mollycoddle illegal aliens.

The true tragedy of this shameful ordeal is how eminently foreseeable it all was. Trump’s immigration enforcement policies, especially those like Remain in Mexico, were effectual at stanching illegal immigration inflows and restoring order to our porous border. Much as with the Biden administration’s kowtowing to the Iranian regime in the foreign policy arena, its reversal of Trump-era actions on immigration enforcement seems less motivated by genuine concern for the common good of the polity and more motivated by a blinkered case of “Orange Man Bad.”

Such posturing might play well among the blue-checked Twitterati, but the American people pay the price.